Hartzer
50 percent of all USA web traffic goes to just 74 websites ( shown in the photo below). We should give up on guest blogging unless it will appear on one of these sites.
If your guest post isn't on one of these sites, no one will see it.
That's what Lisa Myers said at Mozcon this week.
Prove that she's wrong.
43 👍🏽 7 🤭 5 🤯 56 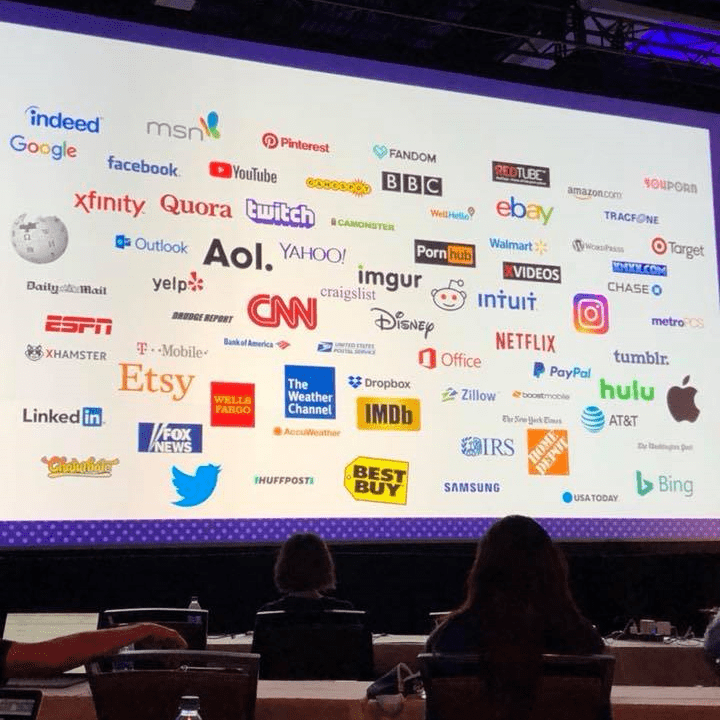 Kasem
Hmm interesting hypothesis! I'll do some competition analysis and see for myself
🤭👍🏽2

Brian
Provocative statement in the OP.
All I can say is relevance in link building (whether geo or niche or brand or follow or no follow) goes a long way to improving a client's traffic.
I bet the "6 degrees of separation Cadillac links" power punch action in the background does come into play and I take them when I can get them but there are lots of low-hanging fruit, traffic-building links available to those looking to build traffic.
Understanding the essence of the OP is important tho.
Thies
That's lovely fodder for a corporate audience but in the real world the long tail of websites is usually able to deliver a more focused audience. And as Moz halfway learned too late to save them, paid social is the new SEO.
🤯👍🏽8
Thies
Build a social audience and find the aggregators in your niche. They're there.
Wilson
Hi Dan! You were one of the first people I learned SEO from in 2006! Thanks 🙏🏻
👍🏽💟3
Ammon » Dan
You know I love ya buddy, so don't make me hurt you with any of that "X is the new SEO" crap of a billion clickbait articles over 2 decades. 😃
Paid Social is the new banner ads. Not a darn thing more (if you were any good at selecting sites to run banner ads on, and getting the right creative for the audience and site). 😃
Tell you what, why not pop over to p0rn-hu6 from those most visited sites and see how many banner ads it has, and how many 'paid social'. And NO industry has been more on the pulse of where the money and power is than the top adult sites with their huge amounts of usage data.
Lisa's slide there is simply saying she restructured how her company go about getting links. They switched from guest posting for low to mid quality links to doing the high-end, high-value big money kind of link building. And even then, as I said in an earlier comment, it's only to illustrate the principle that quality is far more important than quantity in many things.
The same point you are making yourself when you talk about the value of long-tail, where the specificity and intent (quality) is so much more valuable than the sheer volume of fuzzier, less qualified head traffic (volume). 😉
Now, there are some people in the game for whom that discussion is irrelevant, because they just don't have the ability to get high-quality, high-end links, so volume is all they can do. Nothing wrong with that. Everyone should play to their strengths.
But personally, I'm in full agreement with Lisa, and it's what I always advise my clients too. It is almost always far more effective and efficient to build fewer, better quality links – the kind where you may work for months on that one perfect article, or on building a relationship with a journo, but the result is worth literally ten times as much as if you'd spent those months just churning out lesser stuff for more but lesser value links.
Thies » Ammon
When you create content and nobody sees it, you waste electricity. When you create content and you have an audience to drive traffic to it, you get real natural links. The easiest way to do that, by far the most cost effective way, is with paid social amplification.
Thies
It doesn't matter if HuffPo gets a ton of traffic, it only matters if your content gets seen by people who care. Give me a link in Barry's weekly link wrapup over a guest post on Huffie any day.
Ammon
So, "Paid Social Amplification", Dan … is that the process of buying a link on Facebook (listed top left of Lisa's slide), maybe Twitter too (bottom left), perhaps LinkedIn (lower left) … 😃
You see why you're making her point yet?
Ronald
I think what Dan is pointing out is building an audience and at the same time getting people to link to your site is much more effective when using paid social amplification. This is because FB, for instance, puts the content right in your face using interruption marketing. You get a much larger reach than if you show up in a Google search result. Here's a quote from Steve Jobs: "A lot of times, people don't know what they want until you show it to them". There is still a shit-ton of traffic available in the lower 50%, but it makes more sense to do targeted interruption marketing (paid or non-paid) in the top 50%.
Thies
Yes, probably. It takes a lot of squeezing to fit everything into one frame.
RELATED POSTs
A Discussion about Apple was Quietly Building a Search Rival to Google in 2020
These were SEO Service Selection in the past C0vid Time 2020
A Funny Search Engine Name Uaaau org
Having a Website versus Facebook Fans-Page
Embed the link of this post
G. News 1G. News 2TwitterFacebookWhatsAppBufferLinkedInPin It

Category: History
history, 50 percent of all usa web traffic goes to just 74 websites (shown in the photo below) | 2021 https://mathlibra.com/50-percent-of-all-usa-web-traffic-goes-to-just-74-websites-shown-in-the-photo-below-2021/