A Poll! Whose SEO Course Is the Best Among These 5 Courses?

Richard
created a poll.
Whose SEO course is the best? 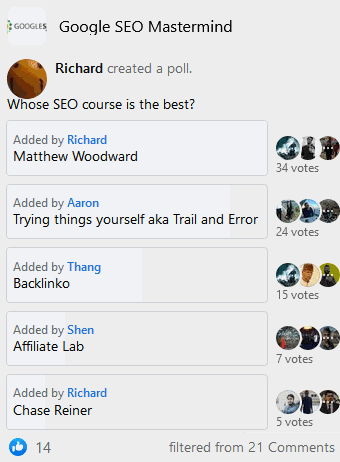 🔗🏹
[filtered from 21 💬🗨]
💬🗨
Shawn Hill 🎓
I’ve heard good things about Chase’s course but I cannot personally vouch for it as I haven’t taken it.
That said, I’ve ranked a few local businesses as a complete newb without courses.
Learning from others, choosing whose advice is credible and who is just fluff, but most importantly—trial and error. 👍🏽1
Meacham
Wasn't Chase adamant about SEO being dead and also called out for faking videos/photo? That just seems hard to get behind someone like that…idk though!
Finan » Meacham
I think you miss the point in why he did that mate. Im currently into this second university course. Trust me this stuff is GOOD.
Meacham » Tommy
eh idk..he literally came in all the groups saying that, and said how toxic the SEO industry is and how he was bullied etc (he's probably right about all that) then went on Craig's podcast and said it was basically all a show. So yeah I mean that kind of works from that angle, so I won't deny the effect of being able to generate buzz and then push a product. So let me guess that's why he did it?
Finan » Meacham
he didn't say that direct to me but even when he did all that SEO is Dead stuff we knew what he was up to and it worked he stood out and thats what marketing is all about (no such thing as bad publicity). All you have to do is look at his product & brand and where it is now from where it was back then, seems to me his strategy has worked. Trust me I have been in the SEO game for 8 years, i'm constantly up – skilling and Chase Reiner and Craig are killing it right now. We all take a gamble when purchasing a course, sometimes the content can be rubbish. But this is certainly not the case for Chase Reiner's courses this stuff is gold! 👍🏽1
Meacham » Tommy
I don't doubt his skill but you are most definitely mistaken about no such thing as bad publicity. Pretty sure Chase is a good example of that actually. I personally don't see many SEO's being brought up into a conversation of "hate" besides Neil Patel, and I think that is one of the biggest PR myths that I still see posted in SEO/Marketing groups. "No such thing as bad publicity".
Finan » Meacham
lol mate Neil Patel makes Millions ? Do yo think he is worried about being hated ? Your missing the point dude.
Meacham
I suppose I clearly am missing the point since this was a topic about SEO courses and who is the best..Chase routinely said he doesn't build links at all and just focuses on content and on-page optimization. He would routinely provide screenshots(that were proven to be fake) of massive traffic gains all without building links and then he would qualify his stance by saying 'i don't build links but the content is so good that i get natural links'. Then he started to aggressively push his products to sell. He is a good marketer no doubt. Faking screenshots though and then selling a course doesn't exactly instill trust for me to want to take the course. I'm not saying Chase is a fraud/bad at SEO or anything of the sort. I respect the hustle of anyone building their brand. No hard feelings. 👍🏽1
Finan
No hard feelings at all dude. But I’m the one of many that’s doing his course and your the one that’s judging without doing the course. Yes he pushes the boat out a little but so do them all and they all admit it. At the end of the day I’m the one doing the course and I know the courses are excellent don’t judge until you do one. It’s pretty simple I wanna learn from those who have proven results and Chase is one of them.

Jackie
Definitely Matt Diggity his course is so comprehensive and the fb group for his students are amazing. Even though it's focused on affiliate SEO, the knowledge can be applied pretty much with any type of SEO. With his extensive experience in ranking many sites in one of the most difficult niches such as health, you can be certain that he really knows his shit 👍🏽1
Nipun
I have taken the SEO course from some valuable sources- Clickminded, Dean's SEO that works, Gotch SEO Academy, Glenn Allsop, Craig.
To me-
Craig focuses on a few things, which many of the mainstream avoids, he is really good.
Glen is another truly amazing trainer. He has something that most doesn't talk about. He covers everything in his course. Some trainers don't talk much about link building, cause they have a different course on link building only, but Glenn is all in one bombshell. Highly knowledgeable SEO genius.
Nathan is an organized trainer, he explains and brilliantly focuses on almost all mainstream white hat SEO techniques. Gotch SEO Academy has some very good SOP stuff for students.
We all know about Dean, the true Gem of the SEO industry. His voice, his pronunciations, the way he explains is simply amazing. He has another course on link building only. In the SEO course, he explains all mainstream white Hat SEO things and some real-life practical viewpoint of his own. Highly valuable training for SEO professionals.
ClickMinded is an amazing SEO course, the all in one package. Focus on all important tools, technical aspects. They have a highly rich SOP library, which is my all-time favorite go-to practical source for technical SEO. Clickminfed SEO certificate is highly valuable in the SEO industry. 👍🏽3

This may satisfy you: Most Votes of a Poll Said That Citations Are Extremely Important for Urban and Rural SEO

RELATED POSTs
Are Coding Skills Important for Being a Successful SEO Expert?
To Know Whether a Person is Really Good in SEO | Search Engine Optimization
Marketplace Websites Get Each First Page of the SERPs With Lots of Keywords They Drive Visitors Who Are Intending to Purchase
Conspiracy Theory in SEO: First Page Results May Change Your Mind or Knowledge
Three SEO Tips related to Secret Sauce
Comments on Someone said SEO is Dead
As an SEO Specialist Do You Ask Any Client for Access Details Every Time You Want to Make Some Corrections?
Case Study: How We Grew a SAAS Company From 0 to 200k Monthly Organic Traffic
Embed the link of this post
G. News 1G. News 2TwitterFacebookWhatsAppBufferLinkedInPin It

Category: SEO Expertise
seo expertise, a poll! whose seo course is the best among these 5 courses? https://mathlibra.com/a-poll-whose-seo-course-is-the-best-among-these-5-courses/