An SEO Opinion: Schema Is Useless; Nothing; Pure Bloat

Mew 👑
Unpopular SEO Opinion: “Schema is useless. Nothing but pure bloat.”
[filtered from 117 💬🗨]

💬🗨
Hassan
Doesn't it help end user ?
Mew 👑✍️ » Hassan
– Does it? How so?
Hassan » Mew
By showing some extra info at Google search?
Like one website is showing it's title+link+description of a product.
Another website is showing these 3 + rating + price + availability etc. Which one would be better?
PS:I have just learned about it few days ago(am seo learner) 👍🏽1
Mew 👑✍️ » Hassan
– You don’t think Google picks those factors up on websites without schema? Just asking 🙂 👍🏽1
Hassan » Mew
I tested few mobile phone sites.
Those having extra information on Google search were having proper product schemas in them. While those without extra information weren't having product schemas in them.

Phil
It depends haha!!
Product reviews are known to make a big difference.
And thin content pages can benefit from the extra topical "hit" because Google can understand what the page is trying to be, and put them through the right bit of the ranking algorithm so you do get some traffic.
But generally there's not a lot of benefit to be had for "general SEO".
People are rushing around trying to implement it and it's just a waste of time for many / most. 👍🏽💟3

Mike » Phil
I reckon some update soon is going to wipe FAQ schema out. I use it a lot but let's face it it's kinda polluting the Search Engine Result Pages (SERPs).
When the day comes, I'm gonna be as annoyed as the next man. 👍🏽2
Phil » Mike
It's almost certainly true… 👍🏽1
Mike
Damn Google and their constant attempts to stop us from taking the piss.

Mike
I've been working on Schema for the last 8 hours and I log onto FB to see this! 😂
One good use I've found is extracting meta from Youtube videos and embedding that info on the page the vid is embedded on in Schema VideoObject. It seems to help rank the page over above the Youtube entry.
But today I've been working on a pretty big eCommerce site and there's no way I'm not marking up the products and breadcrumbs. Dunno why exactly but I'm gonna do it anyway, particularly as it's real estate so there are local and national elements at play 😀 👍🏽3
Furq
I think schema is good especially if your site has a lot of FAQ and reviews.. and eventually helping in CTR improvement. i personally had good experience with Schema. But yeah, it depends. Some might not find schema useful.. 🤔 Implementing Schema don't help in ranking better but it sure improve CTR…
Rahul
Schema is only helpful to increase the CTR that's it.

Jonathan Kiekbusch » Mew
these be fighting words!
I will have to find evidence and either prove you right or wrong 😆 Yet to be seen. 👍🏽💟🤭3
Mew 👑✍️ » Jonathan Kiekbusch
– Haha. This wasn’t my unpopular opinion.
I post these to get contrasting perspectives and debates going.
SEO is about hearing people out and seeing what makes sense and testing it. 👍🏽2
Jonathan Kiekbusch
before i start a FB war, let me provide others with context.
Mark
and i are good friends 😆 I can foresee this going off the rails.

Mew 👑✍️
Hey guys,
Similar to Phil
, I also agree that it depends.
For most local niches and the majority of websites, schema does not matter as what you are marking up should already exist on the page.
Where schema begins to really shine is in context that is not or can not be visible on the website.
Example:
Geo Radiuses
Aggregate Ratings
Same As
And so forth
When possible, use the schema required information on your pages and label it the same way it is done in schema, and it will become less important.
Example:
For local businesses your company name, logo, address, hours of operation and telephone number should be on every page in the footer. Appending it via schema does not do anything for you.
Thanks for all your input guys! Love hearing everyone’s opinions and ideas 👍🏽9

Rienzi
From my understanding schema was created to help robots understand better the purpose of your pages and it's content.
Q:Are you suggesting Google is smart enough that this technology is becoming obsolete? hmmm
I mean since you believe you don't have to put on the schema what is already on the website.
Personal experience somewhat says otherwise but I don't have 80+ data sites to show lol. 😃
Mew 👑✍️ » Rienzi
–
If your semantics and on page SEO is technically set up for crawlers to tell them what to do, I do stand by it being unnecessary unless the schema uses code that would not otherwise be appropriate for the page like Geo Radiuses, Same As and so forth. 👍🏽1
Rienzi
But how would you explain setting up local biz markup causing searcj/map visibility boost? Given what's in the local biz markup is 90% found on the page as well? By chance or random?
Also, isn't it the schema's job to set up the crawler to tell them what to do?
Mew 👑✍️
Rienzi –
My websites that are #1 in the map pack for the city don’t usually have schema on them.
And no.
I’ll make a post tonight explaining exactly what schema does. There’s too many misconceptions about it 👍🏽1

Phil
Speaking of “it depends”, I wanted to see whether seos really thought that .. and it turns out they do! 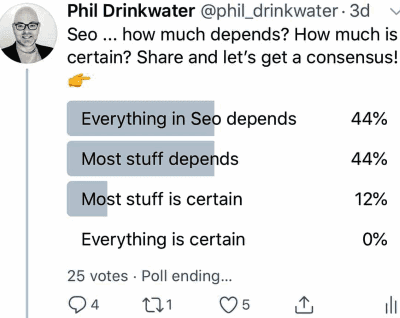 🔗🏹
👍🏽2
Mew 👑✍️ » Phil
– So much truth and it could change tomorrow depending on whatever Googles AI for their AI wants lol
Phil » Mew
totally…
Mark » Phil
I find myself saddened that ‘it depends’ wasn’t an option on this poll 🤭2
Phil » Mark
I did consider it 🤓 🤭1
Jabran » Phil
A SEO expert is someone that always answer a query by "It's depends" in the first, then start explaining. 🤭1

Lee
That’s actually one of my question because google seems to pick whatever they like with or without schema
Serkan
Using FAQ schema doesnt effect ranking directly. However, it helps grabbing attention of users so chances are high to click on your page.
Also, faq schema covers more area than only site title and meta description. In this way, your competitors may be seemed at a lower position.
Smith
Yep. Skip Schema please. Just makes my competition less. 👍🏽5
Ravish
I increased traffic from 1 million visits to 5 million visits per month on a site, Schema was a large part of it.
I want my competitors to think Schema is useless. 👍🏽🤯2

Phil » Ravish
exactly what did schema do for you?
Ravish » Phil
dominated SERPs like this for millions of keywords. 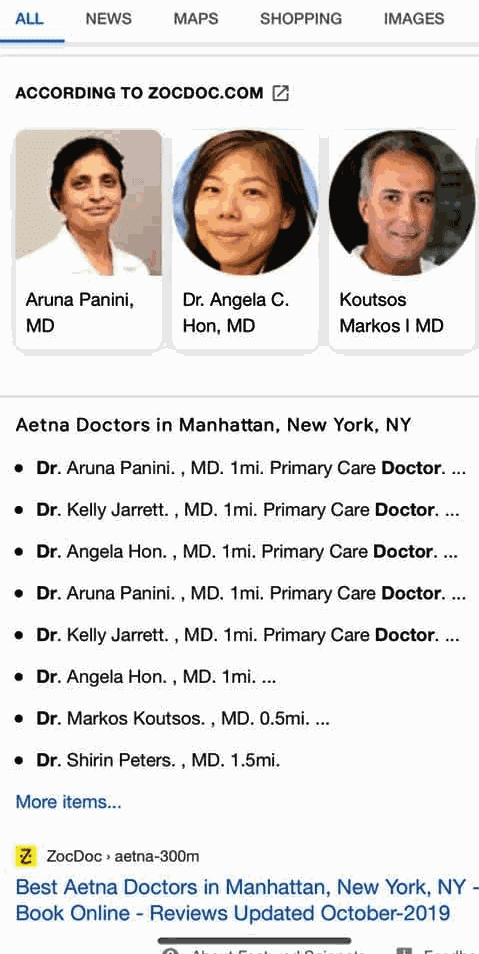 🔗🏹
Phil » Ravish
IMO schema is useless for cases where it’s irrelevant, as I said earlier, but there definitely are cases where it’s incredibly useful too.
I’m glad it worked for you!
Mew 👑✍️ » Phil
– I just don’t think most people understand that all schema does is validate what’s already on the page 🤷🏼‍♂️
Phil » Mew
largely I agree .. but it definitely has an impact on ctr too when google displays the data in the serps as we were saying.
I do think it’s not the great winner for most sites, but for some it’s well worthwhile 🙂
Mew 👑✍️ » Phil
– I’ve never had a problem getting zero position, how to, faq or Q and A without it personally.
Maybe people don’t understand semantically how Google picks up a FAQ section?
Like how if you add FAQ to a long form article it should be an H2 with FAQ + Keyword
Or how you should structure your FAQ headings with an H3 on the same page and answer the question directly.
Example
H3 = What is the average cost of plumbing in Tucson
Answer = The average cost of plumbing in Tucson is…
Not sure really but the only thing I have ever needed schema for to pull feature snippets is probably product ratings if Google won’t pick it up quick enough and to help organic rankings for local service providers with GeoRadiuses. Seems to help push their organize out a little further across a city.
Again, just self referential really.
Oh and I sometimes use SameAs to index citations quicker 👍🏽3
Phil » Mew
yeah I do agree. It’s at least partly there to clear up people not managing to be clear.
I would still use it in the right circumstances .. just because .. but generally I don’t get excited about it. 👍🏽1
Mew 👑✍️ » Phil
– Won’t hurt so might as well! I dig it! 👍🏽1

Zuberi
Schema is not a direct ranking factor according to what I observed schema do increase your CTR more clicks Lead to better ranking if you use it right 👍🏽💟3
Qasim
And what would be your definition and methodology of using it right?
Zuberi » Qasim
by putting right type of schema to the right pages and clearing all the errors after implementing it

Nathan
In terms of SEO it means nothing as in "terms of ranking" however when it comes to marketing you definitely want rich snippets. Can Google pick it up on their own? Absolutely, but the same can be said about crawling your site but we still upload a sitemap and crawl through search console, why? Because of the time, it would take if we didn't.
Phil
I’m not sure I’ve seen anyone post .. that schema really helps google train their machine learning algorithms, should they want to use the data for that reason.
(I would)
Like the disavow tool, they can learn a hell of a lot by people telling them what everything is. 👍🏽1

Mew 👑✍️ » Phil
– THIS! Most overlooked aspect really.
What’s also interesting is how long schema has been around! Most people don’t know micro-formats came out in 2011
Phil » Mew
indeed. I remember it turning up (although I wouldn’t remember the year, off hand).
Google need us to tell them what everything is, so they can test algorithm effectiveness, train ML and much more besides! 👍🏽1

Sravan
Schema shows impact only if u rank in 1st page. Schema is just to show ratings ,faqs etc.,
If u rank on 1st page, because of schema listings people will attract to it & get more clicks. It will improve rankings. Sometimes u will be surprised by getting 0th position (featured snippet). 👍🏽1