Calculating Probability with a Tree Diagram
Q1. You roll a die twice and add up the dots to get a score. Draw a tree diagram to represent this experiment. What is the probability that your score is a multiple of 5?
solution:

Q2. Julia and Brian play a game in which Julia takes a ball and if it is green, she wins. If the first ball is not green, she takes the second ball (without replacing first) and she wins if the two balls are white or if the first ball is gray and the second ball is white. What is the probability of Julia winning if the jar contains 1 gray, 2 white and 4 green balls?
solution:
Let’s draw all possible outcomes and calculate all probabilities.

Now, It is pretty obvious that the probability of Julia’s win is:

Q3. What is the probability of throwing at least one five in four rolls of a regular 6-sided die? Hint: do not show all possible outcomes of each roll of the die. We are interested in whether the outcome is 5 or not 5 only.
solution: 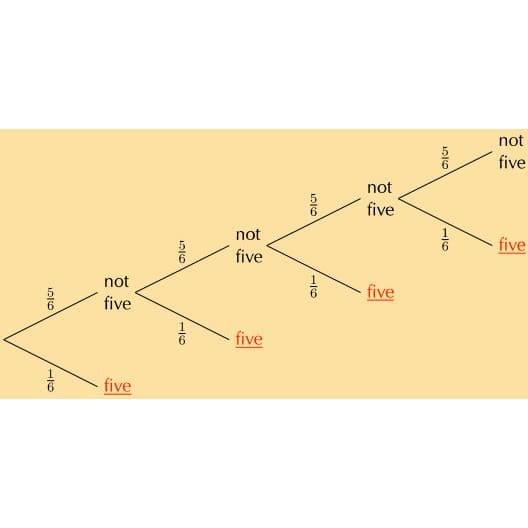 The outcomes that lead to at least one 5 in four rolls of the die are marked on the tree diagram above. Summing the probabilities along all the branches gives

The Following Probability Tree below Represents the Probabilities of Some Without-Replacement Events
Q4. A bag contains 10 orange balls and 7 black balls. You draw 3 balls from the bag without replacement. What is the probability that you will end up with exactly 2 orange balls? Represent this experiment using a tree diagram.
Solution:
The tree diagram for the experiment is shown below. Since balls are drawn without replacement, the total number of balls (which appears in the denominators of the fractions) decreases by 1 at each step. Depending on whether the ball drawn was orange or black, the numerator either decreases by 1 or stays the same. The outcomes containing exactly 2 orange balls are underlined.

Let’s read the post Calculating Probability with a Tree Diagram
RELATED POSTs
The Number of Elements Of An Event, Enumeration
Using tree diagrams to enumerate parallelable occurrence of an event
Fundamental Principle of Counting, an introduction to probability
How many ways can persons sit together? permutation condition
Factorial QnA
Permutation Formula, QnA
Letters Arrangements, QnA about Permutation
The Number of Possible Composition, Number of Possible Formation (permutation QnA)
Embed the link of this post
G. News 1G. News 2TwitterFacebookWhatsAppBufferLinkedInPin It