Calculating Probability with a Tree Diagram

Tree Diagrams
What are tree Dia rams and when do ou use them?
● Tree Diagrams are a very powerful tool in probability
● They are a very convenient way of representing awhole load of complicated information, which then allows you to answer some big mark questions without too much trouble.
● You tend to use tree diagrams to answer questions where there is more than one experiment going on at once, and the outcomes are not all equally likely
BONUS: tree Diagrams can be used to answer questions involving both independent and non- independent events. 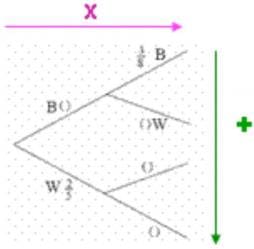 NOTE: And a really good way to check you have down everything right is to add up all the probabilities are the end of your branches, because you know that the sum of the probabilities of all outcomes must add up to 1!
Example 1
Sarah is bored – very bored – so she puts twelve coloured cubes in a bag. Five of the cubes are red and 7 are blue. She decides it would be fun to remove a cube at random from the bag and note the colour before replacing it. For even more fun she then chooses a second cube at random. ‘What is the probability she pulls out two beads of the same colour?

Okay, so what are the things we should be thinking about when we knock up a tree diagram?…

1. What are our two experiments so we can spilt up our tree diagram?…
Well, what about Sarah’s “first pick” and then “second pick”?

P(blue)=7/12
4. On our second pick, do our probabilities change?…
Well, there is acrucial little phrase hidden in the question: “replacing it”. Because Sarah pops the bead back into the bag after each pick, whatever she gets on her first pick has no effect whatsoever on what she gets on here second, so the probabilities remain the same.

If you want to be really fancy about this (and why not!), you could say that because Sarah replaces the cubes, the events are INDEPENDENT of each other! 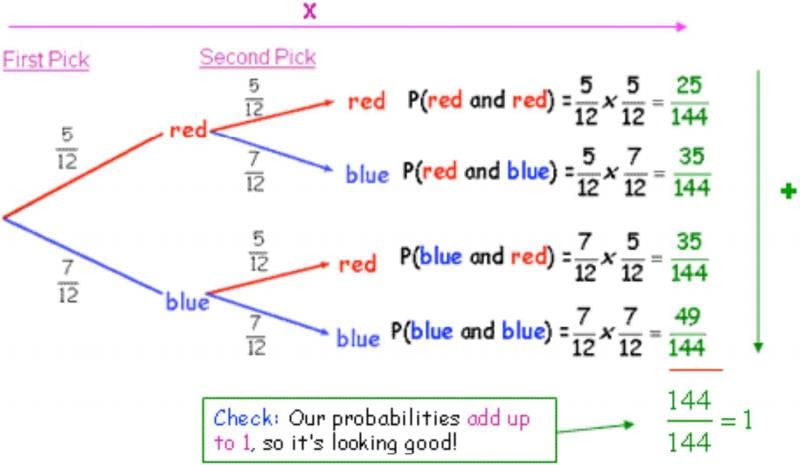 Question: What is the probability she gets two beads of the same colour?…
Well, the end of which braches give us that?
P(same cofour)=P(red and red)+P(bIue and blue)

Okay, before we start, let’s make sure we know what’s going on here…
1. What are our two experiments so we can spilt up our tree diagram?…
Well, what about “Scrabble” and then “Monopoly”?

2. We know the probability Hannah wins at Scrabble is 0.7, but what about George?… Well, either one wins, or the other (we assume no draws), so the two probabilities must add up to 1. So…

3. And how about Hannah winning at Monopoly?…
It’s a similar sort of thing

4. On the second game. do our probabilities change?…
Well, because the question does not say so, we must assume that the probabilities stay the same, and the results in Scrabble and Monopoly are INDEPENDENT.

You might argue that it Hannah wins at Scrabble, then George will be more determined to stuff her ‘Friend at Monopoly, but the question is trying to make life easy for us, so let’s let it! 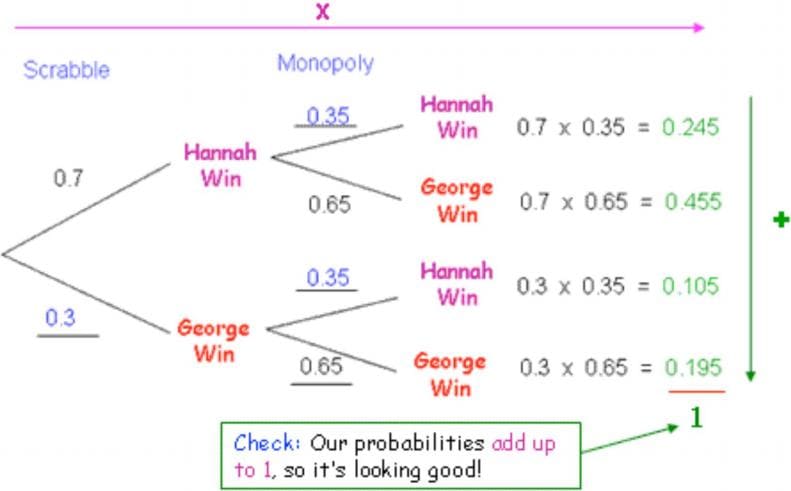 Question: What is the probability George wins both games?
Well, we just follow the bottom branch…

Example 3
Sarah is bored again, so it’s back to the bag of beads! However, this time she really decides to spice things up. She still has 12 beads, but this time there are 5 red, 6 blue and 1 green. Crazier still, when she picks one out this time, she decides not to put it back! What is the probability that after two picks, Sarah has two beads that are the same colour?

Okay, this is a bit of a tricky one, so let’s try and get our heads around what is going on…

1. What are our two experiments so we can spilt up our tree diagram?…
Well, I reckon it must be “first pick” and then “second pick”?

2. The probabilities on the tirst pick should be easy enough:

3. It’s on the second pick that things start getting tricky.
Say Sarah picks a red out ‘First, what is the probability of her picking a red out second?…
Well, there are now only 4 reds in the bag, and there are only 11 beads as well!


P(red)=4/11
Whenever things are not replaced, you have to think very carefully about the probabilities on your branches! 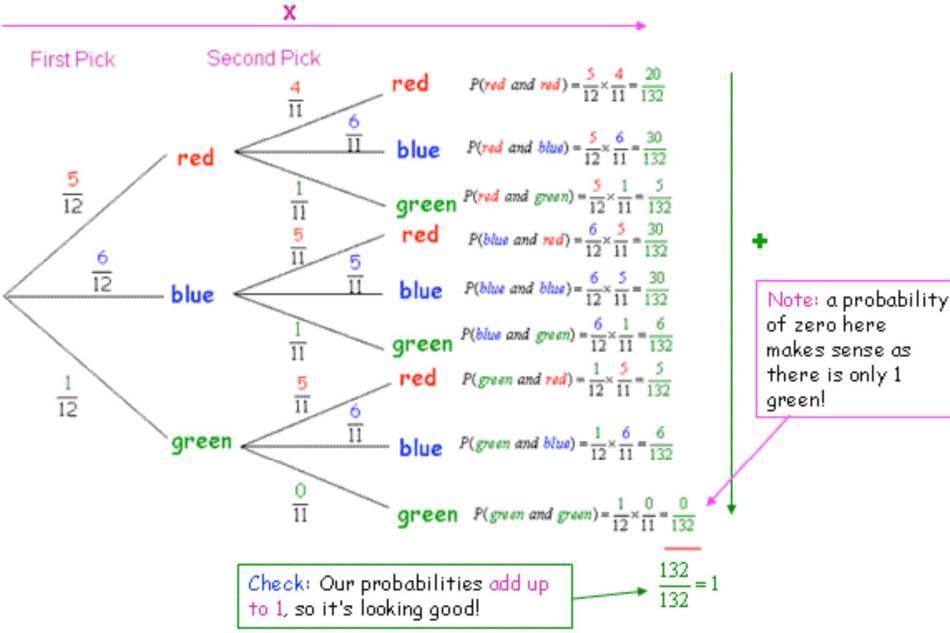 Question: What is the probability she gets two heads of the same colour’?…

Probability of a red sheet of paper being chosen

TREE DIAGRAMS
Tree diagrams can be used to illustrate sample spaces if the possible outcomes are not too numerous. Once the sample space is illustrated, the tree diagram can be used for detennining probabilities.
Consider two archers firing simultaneously at a target. These are independent events.

Example 6
question:
Carl is not having much luck lately. His car will only start 80% of the time and his motorbike will only start 60% of the time.
a) Draw a tree diagram to illustrate this situation.
b) Use the tree diagram to determine the chance that:
i. both will start ii. Carl can only use his car.
solution:
a) C = cal starts
M = motorbike starts
∴C’= complementary event of C = car does not start
and M’ = motorbike does not start

If there is more than one outcome that results in an event occurring, then we need to add the probabilities of these outcomes. 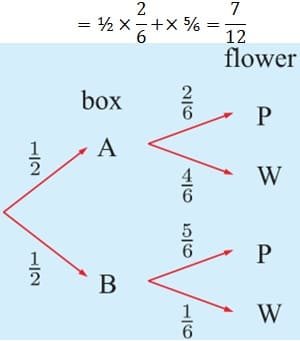