Comments on Someone said SEO is Dead

Ruan » Reiner
is right, Search Engine Optimization (SEO) as a primary tactic is dead… engagement marketing and experiential marketing is next. I’ve said it before “technical SEO” is bullshit and has been ineffective for the last few years. The review scheme and other Google updates validate this. For those who SEO is your only business, follow chase or research experiential marketing as that is what companies will invest in next. It’s where our agency Develomark is also headed. Talk soon!
39 👍🏽 5 🤭 2 🤯 48
[filtered from 89 💬🗨]

💬🗨
Nigel
Bullshit with a capital B! Search Engine Optimization (SEO) is the cornerstone of any marketing strategy.
You want to rank, sort your SEO out first.
Pay-Per-Click (PPC) in the meanwhile – allowing you to concentrate on other strategies.
And I’m not taking about just technical – content is still king!
Ruan ✍️ » Nigel
agreed on content.
Tom
It's just clickbait material. SEO is not dead. They just want attention or suck at it
Ruan ✍️ » Tom
stop. 0% of my revenue comes from “attention” just being honest
Tom
100% of my 3,000 users/day is also from SEO. Not dead.
Ruan ✍️ » Tom
nothing wrong with that! I said as a primary tactic is dead. People want real engagement from companies and brands. In a world where things are going more digital, less people are trusting their Google searches and are depending on recommendations and human experiences. I don’t know where this would fit in affiliate, but it’s the real deal with products and brands
Tom
Agree to disagree. Different things work for different people. But to call it dead even as a primary tactic is just not true. Maybe true for you, but not for others.
Ruan ✍️ » Tom
yeah I guess I meant more so for people selling it! Affiliate it makes total sense.
💟👍🏽2
Tom
Agreed for the affiliates 🙂 people who rank #1 for those SEO service keywords are proving they know what they're doing. And they can get lots of clients through it. It shouldn't be the only strategy though.
Nigel » Ruan
“fewer people” – SEO is a lot about using the correct grammar! 🤡

Paul
SEO is not dead, period! Also, Search Engine Optimization (SEO) is part of a good marketing strategy rather than an alternative. And it's hardly 'experimental' marketing, it's all been done before!
💟👍🏽3

Ruan ✍️ » Paul
never said it was new! I’m just saying as the world goes more digital, brands will loom to invest in their customers having experiences rather than just a digital ad or Google space to rely on traffic. Brands need to get face to face with their customers. Don’t believe me? The largest agency in the world at $1b does experiential
Paul
What you mean as the world goes more digital? Do you think it's 1999? That boat already sailed!
Ruan ✍️ » Paul
do you buy everything you see from Facebook ads? Do you click on every Google ad and buy whatever they’re selling? I will bet my $2.00 in my bank account you don’t. How about when you’re at an event and someone offers you something? Look up the stats! It’s incredible
Paul » Ruan
what on earth has all of that got to do with the price of cheese?
Paul
You are gibbering

Jean
Or just call it marketing and evolve as needed. That way it doesn't sound like you jumping on every bandwagon and have a solid solution to offer.
💟👍🏽3

Ruan ✍️ » Jean
that I can agree with

Ruan ✍️ » Sajawal
sure, for a small fee of $10,000 I can edit your title tags and meta tags for your unknown brand 🙂 see what’s wrong there?
💟1
Sajawal
Ruan I am out!!!
10k in here means a lambo with full tank..I will figure it out thanks hahh

Andrew
I disagree. Don’t put all of your eggs in one basket ofc but you need strong SEO / content marketing, email marketing, social media, and PPC. 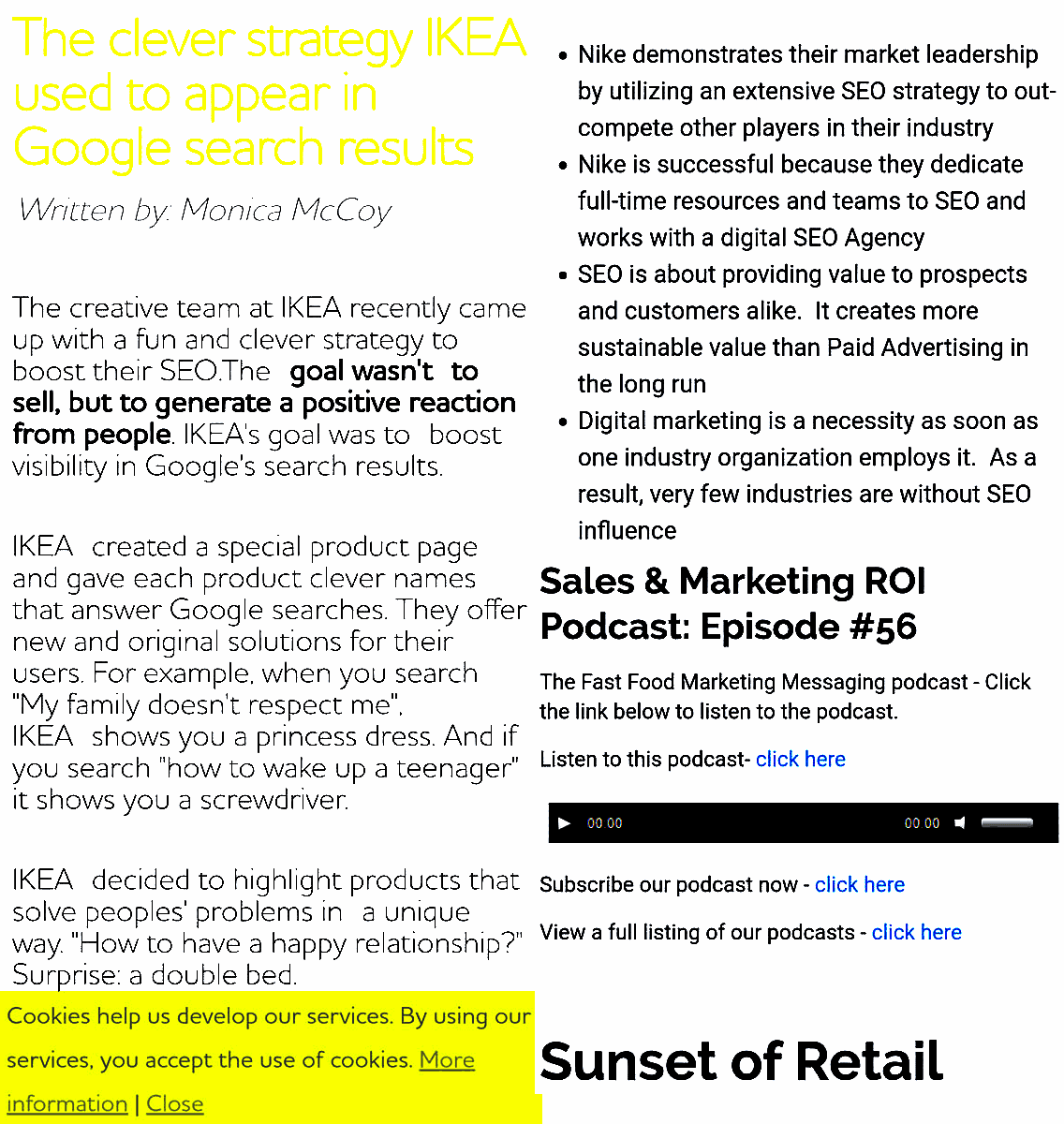 🔗🏹
Paul
You talk utter pish and a few examples do not dictate whether or not a whole industry should exist or not.
I've come to the conclusion that you are somewhat lacking when it comes to intelligence and logical thinking, no point in any debate with you as you don't see other people's argument as any sense, don't actually read and take in what is said and just act immature, I've wasted enough time.
Ruan you boast that you rank #1 for Search Engine Optimization (SEO) in NYC so I'm presuming you offer SEO services, YET you say SEO is dead. Oxymoron from a moron? Or did it just die yesterday and you have still to change your business model?
And before you start any crap about it's only dead as a primary tactic nobody says it has to be. The 'primary tactic' to get more customers in this digital age (you referred to as being new) is 'digital marketing' which SEO is part of you fool. Really dropping this now, away you go and work for a big company that doesn't use SEO.
Albin » Ruan
Large companies absolutely do care about SEO. In many cases organic is where a large part of their traffic comes from. Of course, there is much more to it than alt text optimizations and the like 🙂
Paul
Repeating here what I have to say as some may not see it buried in a reply to a reply…
What on earth are you talking about when you say agencies will need to look at other alternatives? A smart company will hire a smart SEO agency or person to do their SEO, hire a smart PPC agency or person to do their AdWords campaign, a smart content creator agency or person to do their content, a smart copywriting agency or person to do their copywriting, a smart social media marketing agency or person to do their social media, a smart web designer to do their web design so it's good for user experience with a good user interface, a smart email marketing agency or person to do their email marketing and so on. What on earth is your point exactly? What is the alternative(s) you speak of (in one of your replies to a comment) that an 'agency' should be doing? OPEN YOUR EYES!
Yes, an agency or person may offer more than one service BUT that does not mean someone that specializes in just one aspect of digital marketing has to branch out to cover other aspects. Are you not familiar with the term 'niche'?
Paul
Now my phone has charged I'll end with my last comment before sleeping. Please sum up this 'Experimental Marketing' you talk of in one or two sentences and if you can't then just shut up!
I'll make it easier for you, just sum up the 'engagement marketing' you talk of in just one or two sentences and if it's something new I'll go out and buy a hat so I can eat it!
Zachar
i dont know why any business would use SEO as a primary tactic
Rienzi
Depends on the timeline, niche size and/or resources. If the niche is relatively small and doing Local SEO will get their hands full, then why not?

Rienzi
Can you provide solid proof or this is just pure marketing? You're getting the engagement though. 🙂

Ruan ✍️ » Rienzi
search “experiential marketing” its a billion dollar industry on the rise
Rienzi » Ruan
we know that. I mean any case study to prove SEO is dead or whatever your stating that's dead.

Amol
Ruan what exactly you are doing in context of experimental marketing..For your agency

Ruan ✍️ » Amol
I’ll explain in my next Youtube video. Basically sending brand ambassadors to events for clients and engaging with real people in person
Amol » Ruan
great… I am great fan of your content watched all of your videos… Simply following your footsteps… Would love to listen…

Peter
That is the most ludicrous comment I have read yet. The only people that condemn organic Search Engine Optimization (SEO) are the individuals or agencies that are not familiar with organic SEO.
Google places only the most entrusted sites on page 1 in the organics. So much so that it receives the majority of traffic above PPC marketing which sits at the dead top.

Nigel
Peter Authority & Trust are so important
Peter » Nigel
Of course… The funny thing about the title is that he believes it all falls under white hat SEO. and what organic SEO really is.
There is nothing white hat about organic SEO that is designed to manipulate rankings if you expect to rank within weeks to a matter of months, especially when hiring an agency or specialists.
No matter how natural looking or executed. And that's what all clients want. weeks to months. Not years.
The title alone tells me they are not familiar with organic SEO. Scare tactics
Nigel » Peter
organic SEO designed to manipulate?
If you write properly about s subject and include relevant keywords. It’s hardly manipulation. It’s writing authoritatively.

Norman
Come on Ruan you can't be second fiddle to Chase. You can't piggyback is the plan. I like you, and you seem successful, from the outside it looks like you're just following in his path. Not creating your own at all.

Ruan ✍️ » Norman
I don’t sell a course, this is an actual educated opinion. I don’t mean to cause a revolution, but I don’t want to inform people we’re our agency is headed
Norman » Ruan
not trying to be a dick… it just seemed like whatever he posts… one of your videos follows in that same nich/topic. Truth be told, I don't spend much time on here but just an observation from a far.
Jordan
lol… love it when people think that because you agree with another trainer you are "piggybacking". Mayyybe its just the way it f*cking is
Norman
Lol… no. Believe it or not… some people make their own path. I know that's a foreign concept in 2019. But it's true. Google it.

Garza » Ruan
and Chase Reiner I 100% agree with this. SEO is just a tool in part of a WAY LARGER Marketing strategy that effective in conjunction with other marketing tools such as PPC, conversion rate optimization (CRO), Authority Hacking, Branding
Strauss » Ruan
technical is dependent on the level. of the playing field, if you are playing in a uber high traffic niche then technical become a real deal breaker.
Mathias
This thread has become too much. If u make a strategy for ya digital existence, you Will always start with the SEO strategy. Because every other Thing i effecting it. So stop ya crap about saying marketing is "the New Thing" because it never Will. Digital marketing strategy is another Word for a SEO strategy.