Competency Evaluation of Ability on Probability Teory Comprehension
Instruction: Choose the one correct answer of each question.
1. Two balance coins are thrown at the same time. Probability of emergence at least one numeral side …
A. ¼ B. ½ C. ¾ D. ⅔ E. ⅚
Correct: C, the explanation:
We don’t need to count each probability. Probabilities of one numeral and two numeral don’t need to be counted!
We need to count the probability of complement of that event first.
The sample space of throwing a coin once is equal to 2.
The sample space of throwing k coins once is equal to 2k.
Thus the sample space of throwing 2 coins once is equal to n(S)=22=4.
Suppose E states image side and N states numeral side. Suppose A consist of emergences at least one numeral side and Ᾱ is complement of event A. Thus Ᾱ consist of only emergence zero numeral sides. Thus

P(A∩B)=P(A)×P(B)
Its meaning, occurrence of event A must be followed by event B.
Probability of event A or B happen is given by

5. If events A and B are independent then the probability of occurence of event A with the condition that event B has occured =⋯
A. P(A∪B) D. P(A)+P(B)-P(A∩B)
B. P(A∩B) E. P(A∪B)-P(A∩B)
C. P(A)
Correct: C, the explanation:
Clear. If A depends on B then Its probability is written as P(A|B). 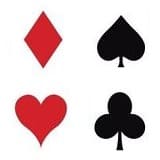 Each type has plenty of cards as many as other.
Hence the chances of drawing a card of respective types with replacement are equal.

8. A bag contains 8 red marbles and 13 white marbles. Two marbles are drawn one by one without replacement. The probability of both marbles that drawn are red =⋯
A. 1/15 B. 2/15 C. ⅕ D. 4/15 E. ⅓
Correct: B, the explanation:
Phrase “without replacements” means that both the number of expected elements and the number of whole elements are reduced by one after withdrawing.