Using Tree Diagram
In the taking of two cards in a row from a set of cards, probability of getting ace on the first taking and heart on the second taking, can be determined by using a tree diagram as shown below.

Suppose in the taking of a card, the taken card is returned, then the tree diagram from the probability of the taking is as follows: 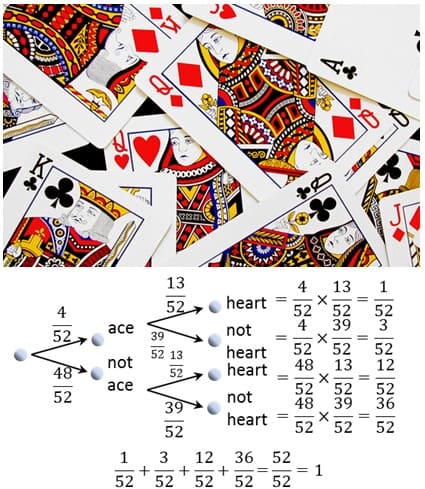 P(A∩B)=1/52
Conditional Probability
If two events occur sequentially and both events are not mutually exclusive, but influence each others, then the event is called a conditional event. Probability of occurence of the event B which will occur if event A is known that have occured, is called conditional probability and it is denoted by

Suppose one person will be selected randomly to be the chairman. How to determine the probability of the selected is male with the condition that he is actively working. 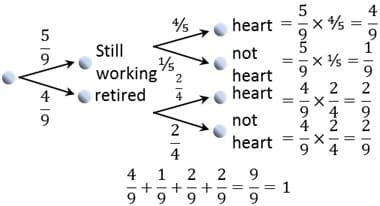 If event B occurs after event A has occured, then probability event B is called conditional probability, is denoted by P(B|A), and formulated width

Exercise Competency Test 4 of Probability Part III
1. Two balance dice will be thrown at the same time. The sum of numeral sides facing up is less than 4 and the first die appearance is desired a 1. The satisfied chance of the second die throwing is …
A. ⅓ B. ⅔ C. 1/12 D. 1/9 E. ⅙
Correct: A, the explanation:
The chance of first die getting one equals ⅙. The elements of the sum which is less than 4 by the following first die getting are {(1,1),(1,2)}. The number of the possible outcomes of two dice rolling is 6×6=36. The chance of the following sum is 2/36.
Hence the satisfied chance of the second die throwing is

A is the wife, H is her husband and S is the sample space.
The probability that the wife joins her husband for watching TV equals


P(A)=0.75;P(B|A)=0.92
P(A∩B)=P(A)×P(B|A)
P(A∩B)=0.75×0.92=0.69
RELATED POSTs
The Number of Elements Of An Event, Enumeration
Using tree diagrams to enumerate parallelable occurrence of an event
Fundamental Principle of Counting, an introduction to probability
How many ways can persons sit together? permutation condition
Factorial QnA
Permutation Formula, QnA
Letters Arrangements, QnA about Permutation
The Number of Possible Composition, Number of Possible Formation (permutation QnA)
Embed the link of this post
G. News 1G. News 2TwitterFacebookWhatsAppBufferLinkedInPin It