Mew 👑🎩
🤯🤯 So I Found My Way Into Some Google Programming Documents On Their Back End, and Read This About How They Create Entities – Can Any of Our Technicals Confirm? As it sounds like Entities are groupings, not singularities?!
Define an entity
An entity is a grouping of things with rules or data in common. An entity often represents a group of people (eg children, applicants, stakeholders) but it can also represent a group of objects (eg textbooks), activities (eg assignments), or concepts (eg school terms).

Composite Entities that Run on Annotated Terms
Optionally, you can define a composite entity, which enables you to define each entity as a sequence of terms. That is, the composite entities take a sequence of words rather than the words themselves as input. All the words of the sequence have to have been annotated with an entity. Also, all the words must appear within the same line of a document in the order defined in the composite entities file. Then, if the sequence of words matches the composite entity, the full sequence is identified as an instance of the entity represented by the composite entity.
Entity Blacklist File
The entity blacklist is a text file that contains terms not to store in the index. If the search appliance discovers an entity that is present in the blacklist when indexing new documents, it discards the entity.
By default, the entity blacklist file is empty. To add terms to the entity blacklist, create a .txt file in which each line contains a term that represents a blacklisted entity. A term can include any number of words, but cannot contain regular expressions.
Related Queries
You use Related Queries to associate alternative words or phrases with specified search terms. When a user enters the specified search term, the alternative appears as a suggestion. The user can click the suggested alternative to start another search.
For example, if a user searches for "Mark Twain," the search results can suggest "Sam Clemens." Related queries appear on the search page after the words "You could also try," unless you change the text by using the XSLT Stylesheet.
Related queries appear as suggestions on the search results page only when a user searches for the exact search term that you specify. The following table provides examples of search terms and related queries.

Richelle Anderson 🎓🎩
This actually makes a lot of sense from a user standpoint.
I started seeing this connection when I saw the "nested" schema concept.
Finding connections between topics is how you have seen this going anyway correct?
Mew ✍️👑 » Richelle Anderson
Indeed it is, as I stated below, it looks like Google may be treating the encapsulations of terms as entities, whereas the standard model of Search Engine Optimization (SEO) predicted entities to be singularities.
This would change everything and makes more sense in my opinion and why documents rank higher when other "Encapsulated Terms" are present from the "Entity" as a whole. 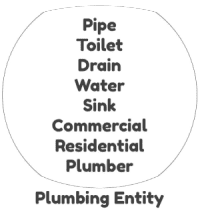 Marco
Makes sense, at the end search engines work with a reverse indexing database with lemmatization and stemming, it's more computationally efficient to group things into entities and search the database that way

Mew ✍️👑 » Marco
So essentially, as you explained above, it looks like Google may be treating this entire encapsulation of terms as an entity, whereas the standard model of Search Engine Optimization (SEO), currently says that entities are independent of other entities, if I am reading these documents correctly.
That would change everything and the entire approach. It makes 1000% more sense, however, no?

🔗🏹
Marco » Mew
Yeah in that example from the picture if Google finds the word "water" in your page then it can search for "toilet", "pipe", etc in the same group and then goes: "ah yes this is a plumbing entity therefore it must be talking about plumbing".
So at searching time, when someone searches for "plumber Arizona" then it knows to go searching for the words "plumbing" (of course) but also contain some of the words "pipe, water, sink, etc" in the rest of the page
💟👍🏽2
Mew ✍️👑 » Marco
It makes 1000% sense when you explain it this way, as Google would have to use term encapsulation for entity recognition to understand the difference between Buffalo's as an animal and Buffalo NY the city.
Or Jordan the basketball player versus Jordan the city.
Incredible
Richelle Anderson 🎓🎩
yeah… this would do it..
I have an HVAC company that has wheels in the name of the business.
Google associated them with car AC as well due to the connection. She hired someone that could do it…
Altman » Schieler
Then you can store objects inside other objects or entity inside other entity. This is how a silo works using internal linking. So instead if using an array we can use a link with attribution words. After reading the 2016 patent and related to oop this helps to create objects. Also, it means you can create objects in ways that don't exist ie Brands. You just want to build out and the object and all the attributes correctly. Using silo will help build out the objects with in objects which in basically pagerank.
Mew ✍️👑 » Altman
Indeed, makes a lot of sense when you use the above model. I don't think SEO users in large think of entities this one. Fascinating stuff.
💟1
Altman » Schieler
I mean … its just programming at the end of the day. I asked this question last week on SEO video show to guest. Discussed how unknown topics will build out and associate based on the keywords as a related object. So, the above model should include methods. The methods should be 1) links (both in and out) 1b) other related entity as objects 3) pagerank … i think these would help SEO build out their object models. We do similar in say c#, php, java, etc.
just my recent ideas as I look at this.
Mew ✍️👑 » Altman
That and using known corpora, from say Wikipedia 😃 (read first sentence from below documentation). Google DoEsnT UsE Wikipedia
https://static.googleusercontent.com/media/research.google.com/en/us/pubs/archive/42453.pdf
💟👍🏽2
Altman » Schieler
Their library project and nlp is based on Wikipedia is my understanding. So that's why the language is so biased. Wikipedia is done by a bunch of white dudes 🤣🤣🤣 but they use the modeling from it from what I understood.

Altman
Its OOP. Seems straight forwards. Objects can be stored in objects in objects etc. i am starting to call it oo-SEO or "double-o SEO". Makes far more sense to me to build out the object attribution this way.
💟👍🏽2
Kathy
What am I missing? I understand this didn't follow your understanding of entities. But how is this new with our understanding of how Google works? And what does it mean for application? Will you be doing things differently?

Mew ✍️👑 » Kathy
Doesn't follow the standard SEO model and explanation of entities.
In essence, it means a document is scored higher by words that are a part of an encapsulated model, rather than a free vector model.
I will be doing things slightly differently, especially as it pertains to how I teach and explain entities.
Kathy » Mew
What's interesting Schieler is what you posted here is exactly how I was understanding entities based on what you were teaching. 🙂 Seriously. Maybe my brain connected it with some previous knowledge, but I honestly thought that's what you were talking about – all labels aside. I don't like labels (encapsulated model, vector model). They get in my way of understanding the big picture.
Mew ✍️👑 » Kathy
Absolutely! I have always explained it as a necessary importance to find the correlating entities that give "Salience" to a total topic as free form connections, but I personally, and a lot of SEO / have probably never understood the "Encapsulation Model", only the importance of interconnected nouns as entities.
So, as you stated it doesn't really change the explanation, just the overall understanding, perception and conveying of information.
I also think you have enough of a background to grasp most SEO concepts, outside a beginner or intermediate level, where as a lot of people still struggle with the "Bigger Picture" and put too much emphasis on taking page speed from 1.3 loading seconds to 1.1 LOL
Kathy » Mew
Yes, and buying backlinks. 🙂
🤭1
Mew ✍️👑 » Kathy
Why buy them when you can earn them in Wikipedia haha
Kathy » Mew
The last two, no 3 people I interviewed for an SEO assistant position, not one said anything about a content strategy – actually that's not true. One did but his process was pretty much canned if you get my drift. So I'll rephrase that, not one said anything about creating an intelligent content strategy using expert writers who know how to engage readers. That's at the top of my list. The checklist most value is brainless, repetitive work – after it makes its way to a checklist, that is. Important and very, very necessary, but a good SEO in my opinion starts with the big picture strategy. And with that said, I know I'm setting myself to get DMs. I'm open to that. Just be prepared to share your brain with me. 🙂

These may satisfy you:
» Does One have to be a Programmer to be an Excellent SEO?
» Which Page Builder is the Most SEO-Friendly?

RELATED POSTs
Are Coding Skills Important for Being a Successful SEO Expert?
To Know Whether a Person is Really Good in SEO | Search Engine Optimization
Marketplace Websites Get Each First Page of the SERPs With Lots of Keywords They Drive Visitors Who Are Intending to Purchase
Why Do Neil Patel and Ubersuggest Seem Funny?
Conspiracy Theory in SEO: First Page Results May Change Your Mind or Knowledge
Three SEO Tips related to Secret Sauce
Comments on Someone said SEO is Dead
The Difference Between Trust Flow and Domain Authority
Embed the link of this post
TwitterFacebookWhatsAppBufferLinkedInPin It