Statistics
Suppose we are concerned to know about an object or target of research. For that we need to do research or observation. If the object that we observe has a small amount, then we can observe the whole of its members. But if the object to be investigated has a big amount or it is impossible for us to observe all of it, then the portion of the object is taken to be observed.

In observation, we collect data. This data can be numeric data (quantitative) or categorical data (qualitative). The data that we collect can be proceed by using statistic rules, so that it can be presented and more over it can give meaningful information about the thing which we observe. Then we can continue to analyze the data, so that we can predict possible thing that may happen from the object that we observe.

Generally in statistic method, we will learn about presenting data and predicting things that may happen from the object that we observe. And according to that, then statistical method is divided into two big groups, namely:

1. Statistical Descriptive
Statistical descriptive is methods that related with collecting and presenting data, so that we can get meaningful information about the object that we observe.

In the observing or research of an object, there is a time that it is impossible to observe whole its members. For example to know the average age of incandescent lamps which are produced in a factory, of course it is impossible to observe all of incandescent lamp which are produced by the factory. Beside that, the observations for an object that population have very large sizes tend to spend long time and very big costs. 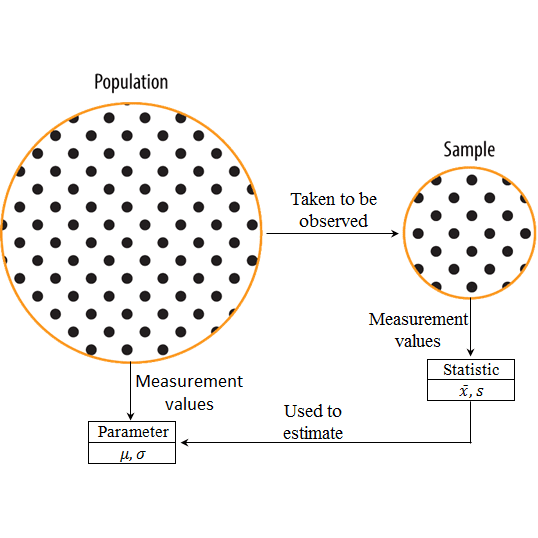 Multiple Choice Example (Example 2):
Intruction: Choose the one correct answer for each question.

1. The population in the passage above is …
A. Flight of a company
B. The empty seat on an airline
C. airline
D. average empty seats
E. flight
Key: B. B is more specific than D.

A method of determining the spread of data is by calculating a measure of the possible distances between the data and the mean. The two important measures that are used are called the variance and the standard deviation of the data set.

(a.i). Population Variance
Let the population consist of n elements {x1, x2, …, xn} with mean x̄ (read as “x bar”). The variance of the population, denoted by σ2, is the average of the square of the distance of each data value from the mean value. 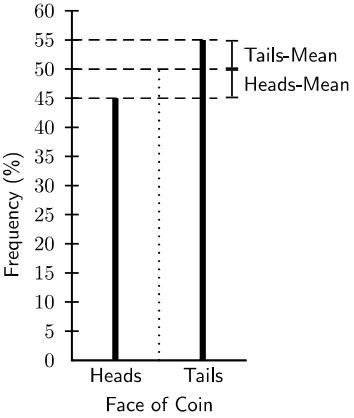 Figure A: The graph shows the results of 100 tosses of a fair coin, with 45 heads and 55 tails. The mean value of the tosses is shown as a vertical dotted line. The difference between the mean value and each data value is shown.

Since the population variance is squared, it is not directly comparable with the mean and the data themselves.

(a.ii). Sample Variance
Let the sample consist of the n elements {x1, x2, …, xn}, taken from the population, with mean 9?. The variance of the sample, denoted by 52, is the average of the squared deviations from the sample mean:

Since the sample variance is squared, it is also not directly comparable with the mean and the data themselves.

A common question at this point is “Why is the numerator squared?” One answer is: to get rid of the negative signs. Numbers are going to fall above and below the mean and, since the variance is looking for distance, it would be counterproductive if those distances factored each other out.

(a.iv). Properties of Variance
If the variance is defined, we can conclude that it is never negative because the squares are positive or zero. The unit of variance is the square of the unit of observation. For example, the variance of a set of heights measured in centimeters will be given in square centimeters. This fact is inconvenient and has motivated many statisticians to instead use the square root of the variance, known as the standard deviation, as a summary of dispersion.

(b). Standard Deviation
Since the variance is a squared quantity, it cannot be directly compared to the data values or the mean value of a data set. It is therefore more useful to have a quantity which is the square root of the variance. This quantity is known as the standard deviation.

(b.i). Population Standard Deviation
Let the population consist of n elements {x1, x2, …, xn}. with mean x̄. The standard deviation of the population, denoted by σ, is the square root of the average of the square of the distance of each data value from the mean value.

Sampling From A Population
Populations are often huge, and gathering data from every individual is often impossible due to time constraints and cost.

Consequently, a random sample is taken from the population with the hope that it will truly reflect the characteristics of the population. To ensure this, the sample must be sufficiently large, and be taken in such a way that the results are unbiased.

To help distinguish between a sample and the whole population, we use different notation for the mean, Variance, and standard deviation. This is shown in the table opposite.

In general, the population mean μ and standard deviation σ will be unknown.

However, given statistics from a sample, we can make inferences about the population using the following results which are assumed without proof:

When a sample of size n is used to draw inference about a population:
● the mean x̄ of the sample is an unbiased estimate of μ
● sn is an estimate of the standard deviation σ. 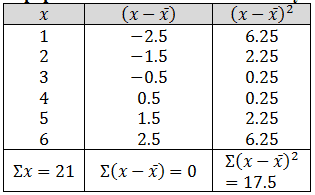