Does Optimizing Website Speed Really Help in Ranking or Is It Typically a Waste of Time? 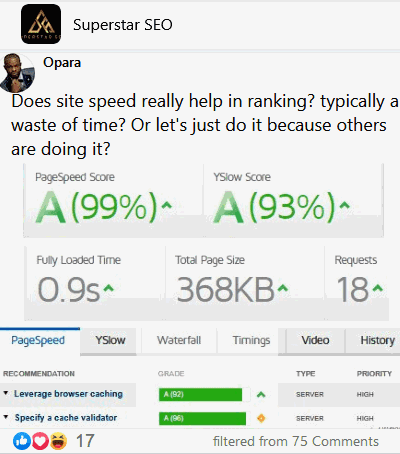 🔗🏹
💬🗨
Gary
If anything it has been proven to have "perhaps" a slight… slight advantage… but it doesn't end there… It plays a bigger part in conversions… dwell time is higher on fast sites they will scroll around because they know they don't have to wait for other pages to load etc.
Pedrotti 🎓
Here is some reading 🙂 – https://web.dev/vitals/
Sort answer, yes. It will help and according to Google is going to have a bigger impact later.
It's one of the few factors that Google has talked about.
That being said, a slow site can still rank from authority.
Andrew
I've completely reoptimized 2 high traffic, decent ranking sites. I saw no change in position tracking. That doesn't mean that during the next big algo update we won't see an improvement and that doesn't mean conversions didn't increase. But I don't see the correlation between speed and rank.
Altman » Andrew
traffic quality

Edwards
Stop optimising for machines. if it is fast for your visitors it should be good enough, however making changes like render blocking scripts etc and lazy load is logical for both
💟👍🏽4
Tanvir
Waste of time for Search Engine Optimization (SEO), but good for User Experience (UX).
Philip
Yes.
1. John Mueller & Martin Splitt said so. https://www.searchenginejournal.com/googles-john…/333057/
2. Slow site speed causes users to bounce, especially if first paint is longer than 2 seconds. Bounce rate is a ranking factor.
Google’s John Mueller & Martin Splitt Answer Questions About Site Speed – Search Engine Journal

Mike
Bounce rate is definitely not a ranking factor.
Philip
Mike Google is interested in UX. Why would they not use bounce rate as a metric?
Mike » Philip
Because bounce rate doesn't tell them if it was a good or bad experience.
If my toilet explodes and I'm looking for a plumber, I go to Google, click on a website, then decide to call them without ever visiting another page on the site, that will register as a bounce. Why should the site be dinged for that? I found exactly what I wanted.
Think about the type of searches for which people end up on Wikipedia pages. Do you think most people really browse around to other pages? No. They find what they wanted and leave. Is that a bad user experience?
Also, bounce rate is extremely easy to manipulate. I could create an event that fires when you scroll down 10% of the page. That would cause another session and drastically lower my bounce rate.
💟👍🏽5
Sumit
How to reduce bounce rate on any website
Mike » Sumit
Create some lame event to fire. It will drop your bounce rate to almost zero. Won't help you make any more money or get more traffic, but your bounce rate will look all sparkly.
🤭1
Kafka » Mike
nice to see you rockin those facts. 🥳

Mike
I have never found a single case-study where someone focused on page speed and it resulted in better rankings. I've tweaked sites myself. Zero impact.
What Google has said since they made speed one of the ranking factors was that they were grading pages on a pass/fail basis. Either a page was fast enough or it was not. There were no bonus points for making a page slightly faster if it was already fast enough.
Looking at the Search Engine Result Pages (SERPs) today, many of the most popular and best-ranking sites fail every page speed test you throw at them, including Google's own tests.
The page speed thing has been a lot like SSL/HTTPS. Everyone freaked out about it because it was a ranking factor, but truthfully it had little to no impact on rankings. (And yes, I know all the reasons why you should use SSL/HTTPS. I'm not looking to debate that.)
Mike
This is Google… 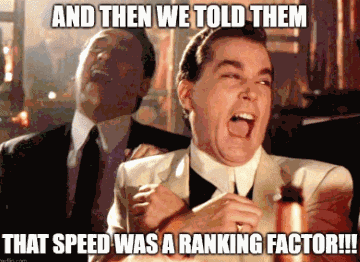 🔗🏹
This may satisfy you: I ever heard that Google Pagespeed Tool is not Important
🤭4
Roland
They say there are 200 ranking factors. Speed is just one of them and not the most important one. Speed helps, but unless a site is really slow, I wouldn't worry about it.
Karina
It makes for a better user experience. Faster load time means lower bounce rate which does contribute to your SEO ranking. 👍 Good job on this! Those scores are amazing! 😊
💟👍🏽2
Mike » Karina
bounce rate is absolutely not a ranking factor.
Opara ✍️
Thank you dear, for reminding me of this post. 😍
Karina » Mike
well Google's customer is the searcher. so if they go to your website and they don't like it and they hit the back button too fast, it absolutely has an effect on your ranking. Same as if they don't click it at all. Every action on your website is telling Google whether it's relevant in a search or not. There are articles that say both, that it does and does not affect ranking but… in my opinion, it goes toward counting as part of the whole user experience. 🤷🏽‍♀️😊
Mike » Karina
Google has no idea how fast someone hits the back button because hitting the back button does not trigger a session. They will only know it was a bounce.
And bounces are not always bad, which is why Google does not use them as a ranking factor. Maybe all I was looking for was a phone number. Maybe I found exactly what I wanted. Maybe I needed a plumber, found a site, liked what I saw and picked up the phone to call them. That will register as a bounce, but how is that a bad user experience?
Google does not use bounces because they do not identify if the user experience was good or bad.
Another example would be Wikipedia. They probably have a really high bounce rate because people do not generally browse around to other pages on their site. They find what they wanted and leave.
The articles that say bounce rate is a ranking factor are not only wrong, but they provide ZERO evidence to back up their bullshit.
Karina » Mike
that makes sense. Thanks for the info. I always appreciate the opportunity to learn something and consider new perspectives. ❤️

Sheppard
Yes it does, but you're looking at the wrong metric. Total load time doesn't matter. It looks pretty but I have sites that say 26s that are faster than that.
The metric that matters is first contentful paint. The point in which the website appears before the user. Dont waste time on anything else as it won't move the needle and won't be noticeable to the user and most likely counter predictive. Google analytics, Facebook pixels, live chat and anything else will make load time go up and up and up but not impact user experience. I load sites at 400 to 600ms first contentful paint.
From my experience 95% of people waste their time moving the total load time which ultimately sacrifices accuracy of analytics and loading of vital tooling to do so and its stupid.

These may satisfy you:
» Speed up Your WordPress Website and Avoid Plugins | Add This Script to .htaccess
» If Some Google Js are the Main Culprit of a Low Page Speed, What Should I Do?

Category: On-Page SEO
on-page seo, does optimizing website speed really help in ranking or is it typically a waste of time? https://mathlibra.com/does-optimizing-website-speed-really-help-in-ranking-or-is-it-typically-a-waste-of-time/