A geometric sequence is formed by multiplying each term after the 1st term by a constant, to determine the next term.

The sequence is convergent because the terms approach a constant value of 0.

The common ratio is:

b) Since consecutive terms alternate between positive and negative values, and approach a constant value of 0, the sequence is convergent.

If the series goes on forever (and in real world applications many do) adding the terms might seem a bit pointless, since they seem to just add up to infinity. But some series, even though they go on forever, have a finite sum. For example, consider the series


1+½+¼+⅛+1/16+⋯.
You can check by adding up this series for a couple more terms that it never climbs above 2, and in fact it approaches 2 the more terms you add up. This is called a convergent series, and this series converges to 2. You’ll meet more convergent series in calculus.(2)
The sequences we have met generally go on for ever (at least in theory, in practise we only work with the first few terms most of the time), so a sequence can converge or diverge too. For example, the sequence

Furthermore, if we want to add all the terms of an infinite geometric series it’s given by

So as long as the ratio has an absolute value less than 1 the geometric series converges. (Otherwise it diverges).

Example 6: For the series

(b) The sum to infinity is

🐾 The infinite sum of a geometric sequence where |r|<1

When the constant ratio, r, is less than 1 and greater than -1, that is, {r: -1<r<1}, each successive term in the sequence gets closer to zero. This can readily be shown with the following two examples.

g: {2, -1, ½, -¼, …} where a=2 and r=-½
h: {40, ½, 1/160, …} where a=40 and r=1/80
In both the examples, successive terms approach zero as n increases. In the second case the approach is more rapid than in the first, and the first sequence alternates positive and negative. A simple investigation with a spreadsheet will quickly reveal that for geometric sequences with the size or magnitude of r<1, the series eventually settles down to a near constant value. We say that the series converges to a value S∞, which is the sum to infinity of all terms in the geometric sequence. We can find the value S∞ by recognising that as n→∞ the term rn→0, provided r is between -1 and 1. We write this technically as -1<r<1 or |r|<1. The symbol |r| means the magnitude or size of r. Using our equation for the sum of the first n terms:

Taking -1 as a common factor from the numerator and denominator:

We now have an equation that allows us to calculate the sum to infinity, S∞, of a geometric sequence.

The sum to infinity, S∞, of a geometric sequence is given by:

where a is the first term of the sequence and r is the common ratio whose magnitude is less than one.

🐾 Ex2 to Ex5. If possible, find the sum of each infinite geometric series.

The common ratio r is |2|>1. Therefore, this infinite geometric series has no sum.

Therefore, the sum of the series is 7.5.

Ex7. (Writing In Math) Explain why an infinite geometric series will not have a sum if |r|>1.
Solution:
If |r|>1 then |Sn| increases without limit.
Therefore, the corresponding sequence will be divergent, and the sum of the series cannot be calculated.
Consider the following geometric series. 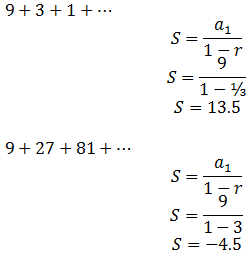 -4.5 is not the correct value for the series, Thus, the formula for the sum of an infinite geometric series does not work when |r|>1.

Ex8. (Reasoning) When does an infinite geometric series have a sum, and when does it not have a sum? Explain your reasoning.
Answer:
Sample answer: An infinite geometric series has a sum when the common ratio has an absolute value less than 1. When this occurs, the terms will approach 0 as n approaches infinity. With the future terms almost 0, the sum of the series will approach a limit. When the common ratio is 1 or greater, the terms will keep increasing and approach infinity as n approaches infinity and the sum of the series will have no limit.

Ex9. (Writing In Math) Explain why an arithmetic series is always divergent.
Answer:
An arithmetic series has a common difference, so each term will eventually become more positive or more negative, but never approach 0. With the terms not approaching 0, the sum will never reach a limit and the series cannot converge.

🐾 Convergence and divergence of series

The sum of a finite geometric series,

S=∑∞k=0 ak, provided that S=lim┬(n→∞)⁡〖Sn 〗=lim┬(n→∞)⁡∑nk=0 ak.
That is, we consider the infinite series as the limit of partial sums Sn as the number of terms n is increased. If this limit exists, we say that the infinite series converges to S. (If the limit does not exist, we say that the series diverges.) This leads to the following conclusion:
The sum of an infinite geometric series,

provided |r|<1.
If this inequality is not satisfied, then we say that this sum does not exist (meaning that it is not finite).

It is important to remember that an infinite series, i.e. a sum with infinitely many terms added up, can exhibit either one of these two very different behaviours. It may converge in some cases, as the first example shows, or diverge (fail to converge) in other cases. We will see examples of each of these trends again. It is essential to be able to distinguish the two. Divergent series (or series that diverge under certain conditions) must be handled with particular care, for otherwise, we may find contradictions or “seemingly reasonable” calculations that have meaningless results.

We can think of convergence or divergence of series using a geometric analogy. If we start on the number line at the origin and take a sequence of steps {a0, a1, a2, …, ak, …}, we can think of S=∑∞k=0 rk as the total distance we have travelled. S converges if that distance remains finite and if we approach some fixed number.

Figure A. An informal schematic illustrating the concept of convergence and divergence of infinite series. Here we show only a few terms of the infinite series: from left to right, each step is a term in the series. In the top example, the sum of the steps gets closer and closer to some (finite) value. In the bottom example, the steps lead to an ever increasing total sum.

In order for the sum of ‘infinitely many things’ to add up to a finite number, the terms have to get smaller. But just getting smaller is not, in itself, enough to guarantee convergence. For example, the harmonic series. 👀