Series Containing Factorials
Series that are neither arithmetic nor geometric must be considered individually. Often the limit of a series can be found to be finite by comparing the terms of the series to the terms of another series with a known limit. One such series 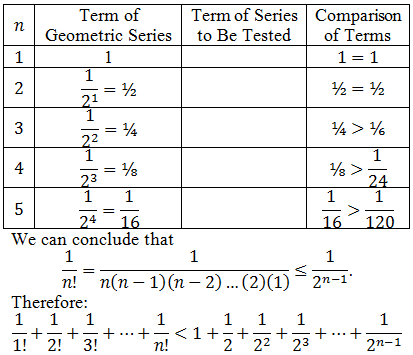 Putting it all together, what we have shown is that for the series ∑∞n=1 1/n!

The Number e
Let us add 1 to both sides of the inequality derived in the previous section. We find that as n approaches infinity,

is equal to an irrational number that is greater than 2½ and less than 3. We call this number e.

This number has an important role in many different branches of mathematics. A calculator will give the value of e to nine decimal places. As the result,

Evaluating e and π with series
Some infinite series can help us to evaluate important mathematical constants. For example, consider the series

Written out term by term, this series is

If we use a calculator to work out the first few partial sums of this series, we get

Again we can use a calculator to work out the first few partial sums of this series. We get

Key Point: Some infinite series can help us evaluate numbers like π and e as accurately as we choose.