Sigma notation is used as a convenient shorthand notation for the summation of terms.
For example, we write

The symbol that is often used to express the concept of summation is the upper case Greek letter, sigma Σ.

The Σ notation is used in the following form: ∑ni=1 ui.
The notation is read as ‘the summation of all the ui’s from i=1 to i=n, where:
• n is the number of terms as long as i=1
• ui represents the terms that are being added
• i is the variable that is used to increment to the next term.

Sigma notation is a way of writing a sum of many terms, in a concise form. A sum in sigma notation looks something like this:

The Σ (sigma) indicates that a sum is being taken. The variable k is called the index of the sum. The numbers at the top and bottom of the Σ are called the upper and lower limits of the summation. In this case, the upper limit is 5, and the lower limit is 1. The notation means that we will take every integer value of k between 1 and 5 (so 1, 2, 3, 4, and 5) and plug them each into the summand formula (here that formula is 3k). Then those are all added together.

Sigma Notation (Summation Notation)
The Greek letter Σ is a mathematical symbol for finding the sum of the first n terms of a sequence ak.

The symbol Σ is the capital Greek letter sigma and is shorthand for ‘sum’. The lower and upper limits of the summation tells us which term to start with and which term to end with, respectively. For example, using the sequence an=2n-1 for n≥1, we can write the sum a3+a4+a5+a6 as

The index variable is considered a ‘dummy variable’ in the sense that it may be changed to any letter without affecting the value of the summation. For instance,

That’s it. Start with k=1 and substitute into the formula, increasing its value by 1 each time until you get to 7, the upper limit. The sigma sign indicates that it’s a sum. And since the question asks for expansion rather than a sum of the series, I’ll leave it like that.

Ex2. Evaluate ∑5n=2 n2.
Solution:
In this example we have used the letter n to represent the variable in the sum, rather than r. Any letter can be used, and we find the answer in the same Way as before:

Ex4. Write out what is meant by the following:

The index Variable here is written as i instead of k. That’s ok. The most common Variables to use for indexes include i, j, k, m, and n.

Ex6. Write out explicitly what is meant by

Solution:
We must let k range from 1 to 5, cube each value of k, and add the results:

Ex7. Evaluate ∑5k=0 2k.
Solution:
Notice that, in this example, there are 6 terms in the sum, because we have k=0 for the first term:

What would we do if we were asked to evaluate

Now we know what this expression means, because it is the sum of all the terms 2k where k takes the values from 1 to n, and so it is

But we cannot give a numerical answer, as we do not know the value of the upper limit n.

Ex12. Expand the series indicated by the sigma notation.

Ex16. Write out what is meant by

Ex19. Write out what is meant by the following:

Solution:
Once again, we must remember how to deal with powers of -1: 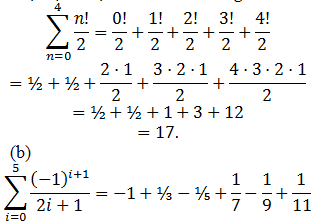 (c) We proceed as before, replacing the index n, but not the variable x, with the values 1 through 5 and adding the resulting terms.

Let’s read post Express Some Series in Sigma Notation.
RELATED POSTs
What is a Sequence?
Get Terms from Sequences
Writing the First Few Terms of each Sequence (Writing a Sequence)
Determine whether each sequence is arithmetic, geometric, or neither
The General Term of Fibonacci Sequence
Translating from Recursive Rules to Explicit Rules (General Terms)
How to Describe every Arithmetic Sequence?
Get the Common Difference of each Arithmetic Sequence
Embed the link of this post
G. News 1G. News 2TwitterFacebookWhatsAppBufferLinkedInPin It