Find the Sum of each Infinite Geometric Series

Example 1: Estimating the Sum of an Infinite Geometric Series
Determine whether each infinite geometric series has a finite sum. Estimate each finite sum.
a) ½+¼+⅛+1/16+⋯
b) 0.5+1+2+4+⋯
c) ½-¼+⅛-1/16+⋯
solution:
For each geometric series, calculate some partial sums.

These partial sums appear to get closer to 1.
An estimate of the finite sum is 1.

As the number of terms increases, the partial sums increase, so the series does not have a finite sum. 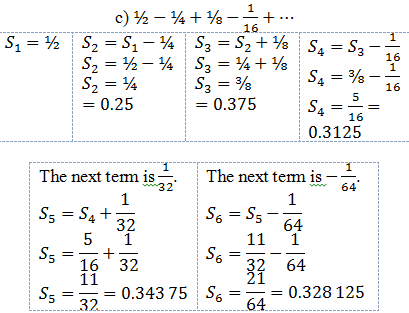 The partial sums alternately increase and decrease, but appear to get close to 0.33… .
An estimate of the finite sum is 0.33… .

In Example 1, each series has the same first term but different common ratios. It appears that the Value of r determines whether an infinite geometric series converges or diverges.

Consider the rule for the sum of n terms.
For a geometric series,

The Sum of an Infinite Geometric Series
For an infinite geometric series with first term, t1, and common ratio, -1<r<1, the sum of the series, S∞, is:

(3) Write the formula for the sum to infinity. 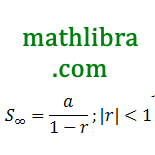 The sum of the infinite geometric series is 20.25.

From the table we can see that the bigger the value of n, the nearer ¼n gets to 0.
(This will happen for any proper fraction, positive or negative.)
We say that the limit of ¼n, as n approaches infinity, is O.

n→∞ means ‘as n approaches infinity’.
lim is short for limit.
In general, for the infinite geometric series:

The only part of this formula that changes as n increases is rn.
As, n→∞, rn→∞, because r is a proper fraction.

Sum to infinity of a geometric series

Taking limit as n→∞ on both sides

as |r|<1, n→∞, rn→0
Therefore the formula for the sum of infinite terms of geometric sequence is given by:

An infinite series is said to be the convergent series when its sum tends to a finite and definite limit.

When the sum of an infinite series is infinite, it is said to be the Divergent series.

In the case when r has magnitude less than 1, the term rn approaches 0 as n becomes Very large. So, in this case, the sequence of partial sums S1, S2, S3, ⋯ has a limit:

The Value of this limit is called the limiting sum of the infinite geometric series. The Values of the partial sums Sn of the series get as close as we like to the limiting sum, provided n is large enough.

The limiting sum is usually referred to as the sum to infinity of the series and denoted by S∞. Thus, for a geometric series with common ratio r such that |r|<1, we have

The fan completed 40/3 revolutions after it is turned off.
Answer: 40/3

Ex5. (Rechargeable Batteries)
A certain rechargeable battery is advertised to recharge back to 99.9% of its previous capacity with every charge. If its initial capacity is 8 hours of life, how many total hours should the battery last?
Solution:
Given a1=8 and r=99.9% or 0.999
Find the sum.

Ex6. (Multiple Representations)
In this problem, you will use a square of paper that is at least 8 inches on a side.
a. (Concrete) Let the square be one unit. Cut away one half of the square. Call this piece Term 1. Next, cut away one half of the remaining sheet of paper. Call this piece Term 2. Continue cutting the remaining paper in half and labeling the pieces with a term number as long as possible. List the fractions represented by the pieces.
b. (Numerical) If you could cut the squares indefinitely, you would have an infinite series. Find the sum of the series.
c. (Verbal) How does the sum of the series relate to the original square of paper? Solution:
a. ½, ¼, ⅛, 1/16, …
b. Find r.

Ex7. (Physics) In a physics experiment, a steel ball on a flat track is accelerated, and then allowed to roll freely. After the first minute, the ball has rolled 120 feet. Each minute the ball travels only 40% as far as it did during the preceding minute. How far does the ball travel?
Solution:
Given a1=120 and r=40% or 0.4.
Find the sum.

Ex8. (Cars) During a maintenance inspection, a tire is removed from a car and spun on a diagnostic machine. When the machine is turned off, the spinning tire completes 20 revolutions the first second and 98% of the revolutions each additional second. How many revolutions does the tire complete before it stops spinning?
Solution:
Given a1=20 and r=98% or 0.98
Find the sum.

Ex10. (Science Museum) An exhibit at a science museum offers visitors the opportunity to experiment with the motion of an object on a spring. One visitor pulls the object down and lets it go. The object travels 1.2 feet upward before heading back the other way. Each time the object changes direction, it decreases its distance by 20% when compared to the previous direction. Find the total distance traveled by the object.
Solution:
Here a1=1.2, r=1-0.2 or 0.8.

The total distance traveled by the object is 6 feet.
Answer: 6 ft

Ex11: Finding the Sum of an Infinite Geometric Series
Find the sum of the infinite geometric series:

Solution:
Before finding the sum, we must find the common ratio.

Ex12. What is the sum of an infinite geometric series with a first term of 27 and a common ratio of ⅔?
A 18

The sum of the series is 2.

Ex14. Find the sum to infinity of the geometric sequence

Solution:
For this geometric sequence we have a=1 and r=⅓. As -1<r<1 we can use the formula, so that 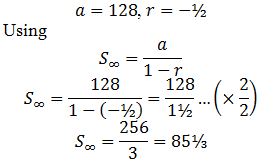 Ex16: Find the sum of the infinite geometric sequence

Ex17. Find the sum to infinity in each of the following Geometric Sequences.
Ex17a)