Fundamental Principle of Counting, an introduction to probability

a. City A and B are connected by three different roads, and city B and C are connected by 2 different roads. If Amat starts his trip from city A, how many ways which he can choose to get city C?
b. Ali has 5 shirts and 3 pants. How many ways which Ali can choose to make pairs of this shirts and pants?
Answer:
a. From City A to city B there are three roads. From B to C there are 2 roads. The ways to get to city C from city A =3×2 ways =6 ways. Show on the following figure that the six ways. 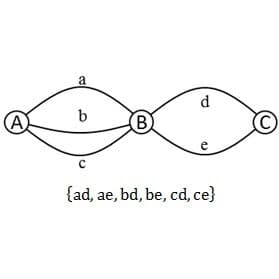 array of all numbers expected
RELATED POSTs
The Number of Elements Of An Event, Enumeration
Using tree diagrams to enumerate parallelable occurrence of an event
How many ways can persons sit together? permutation condition
Factorial QnA
Permutation Formula, QnA
Letters Arrangements, QnA about Permutation
The Number of Possible Composition, Number of Possible Formation (permutation QnA)
Circular Permutation: persons sit around a circular table, multicolor beads on a bracelet
Embed the link of this post
G. News 1G. News 2TwitterFacebookWhatsAppBufferLinkedInPin It