Given the First and Last Terms, How to Form the Sum of the First n Terms of every Arithmetic Series?

Arithmetic series
The formula is Sn=½n[2a+(n-1)d] where Sn is the sum of n terms, a is the first term, n is the number of terms and d is the common difference.

Proof
The general term of an arithmetic series is an=a+(n-1)d.

The above series can be written as

Writing (I) in reverse order, we have

is the formula for the sum of n terms of an arithmetic sequence.

Now this is now a series, as we have added together the n terms of a sequence. This is an arithmetic series, and we can find its sum by using a trick. Let us write the series down again, but this time we shall write it down with the terms in reverse order. We get

But of course we want Sn rather than 2Sn, and so we divide by 2 to get

We have found the sum of an arithmetic progression in terms of its first and last terms, a and ℓ, and the number of terms n.

We can also find an expression for the sum in terms of the a, n and the common difference d. To do this, we just substitute our formula for ℓ into our formula for Sn. From

Partial Sums of Arithmetic Sequences
There is a charming story told about Carl Freidrich Gauss, one of the greatest mathematicians of all time. Early in Gauss’ school career, the schoolmaster as- signed the class the task of summing the first hundred positive integers, 1+2+3+…+99+100. That should have occupied a good portion of the morning, but while other class members busied themselves at their slates calculating 1+2=3, 3+3=6, 6+4=10, and so on, Gauss sat quietly for a few moments, wrote a single number on his slate, and presented it to the teacher. Young Gauss observed that 1 and 100 add up to 101, as do the pair 2 and 99, 3 and 98, and so on up to 50 and 51. There are fifty such pairs, each with a sum of 101, for a total of 50⋅101=5050, the number he wrote on his slate.

This approach works for the partial sum of any arithmetic sequence, and we will use the method to derive some useful formulas. However, the ideas are more valuable than memorizing formulas. If you understand the idea, you can recreate the formula when needed.

To find a formula for the nth partial sum of an arithmetic sequence, that is, the sum of n consecutive terms, pair the first and last terms, the second and next-to-last, and so on; each pair has the same sum. In fact, it is easier to pair all terms twice, as illustrated with Gauss’ sum:

For the general case, pairing the terms in Sn and adding gives 2Sn=n(a1+an) because there are n pairs, each with the same sum. Dividing by 2 yields the desired formula.

The formula is probably most easily remembered as n times the average of the first and last terms.

Sum of First n Terms of an AP
Let us consider the situation: In which Renata put $100 into her daughter’s money box when she was one year old, $150 on her second birthday, $200 on her third birthday and will continue in the same way. How much money will be collected in the money box by the time her daughter is 21 years old? 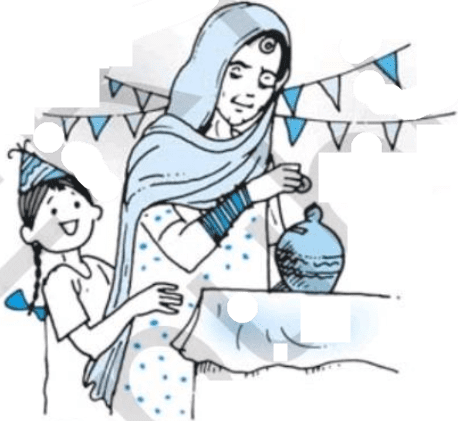 Here, the amount of money (in $) put in the money box on her first, second, third, fourth … birthday were respectively 100, 150, 200, 250, … till her 21st birthday. To find the total amount in the money box on her 21 st birthday, we will have to write each of the 21 numbers in the list above and then add them up. Don’t you think it would be a tedious and time consuming process? Can we make the process shorter? This would be possible if we can find a method for getting this sum. Let us see.

We consider the problem given to Gauss, to solve when he was just 10 years old. He was asked to find the sum of the positive integers from 1 to 100. He immediately replied that the sum is 5050. Can you guess how did he do? He wrote:

And then, reversed the numbers to write

Adding these two, he got

We will now use the same technique to find the sum of the first n terms of an AP:

The nth term of this AP is a+(n-1)d. Let S denote the sum of the first n terms of the AP. We have

So, the sum of the first n terms of an AP is given by

This form of the result is useful when the first and the last terms of an AP are given and the common difference is not given.

Hasn’t the use of the formula made it much easier to solve the problem?

Let us consider some examples in Get Terms from Sequences.