A furniture dealer deals in only two items—tables and chairs. He has USD50,000 to invest and has storage space of at most 60 pieces. A table costs USD2500 and a chair USD500. He estimates that from the sale of one table, he can make a profit of USD250 and that from the sale of one chair a profit of USD75. He wants to know how many tables and chairs he should buy from the available money so as to maximise his total profit, assuming that he can sell all the items which he buys.

In this chapter, we shall study some linear programming problems and their solutions by graphical method only, though there are many other methods also to solve such problems.

B. Linear Programming Problem and its Mathematical Formulation

We begin our discussion with the above example of furniture dealer which will further lead to a mathematical formulation of the problem in two variables. In this example, we observe

(i) The dealer can invest his money in buying tables or chairs or combination thereof. Further he would earn different profits by following different investment strategies.

(ii) There are certain overriding conditions or constraints viz., his investment is limited to a maximum of USD50,000 and so is his storage space which is for a maximum of 60 pieces.

We, thus, find that the dealer can invest his money in different ways and he would earn different profits by following different investment strategies.

Now the problem is: How should he invest his money in order to get maximum profit? To answer this question, let us try to formulate the problem mathematically.

The dealer wants to invest in such a way so as to maximise his profit, say, Z which stated as a function of x and y is given by
Z=250x+75y (called objective function).
Mathematically, the given problems now reduces to:
Maximise Z=250x+75y
subject to the constraints:

Thus, a Linear Programming Problem is one that is concerned with finding the optimal value (maximum or minimum value) of a linear function (called objective function) of several variables (say x and y), subject to the conditions that the variables are non—negative and satisfy a set of linear inequalities (called linear constraints). The term linear implies that all the mathematical relations used in the problem are linear relations while the term programming refers to the method of determining a particular program or plan of action.

Before we proceed further, we now formally define some terms (which have been used above) which we shall be using in the linear programming problems:
Objective function. Linear function Z=a⋅x+b⋅y, where a, b are constants, which has to be maximised or minimized is called a linear objective function.

We will now discuss how to find solutions to a linear programming problem. In this chapter, we will be concerned only with the graphical method.

B.2 Graphical method of solving linear programming problems
In Class XI, we have learnt how to graph a system of linear inequalities involving two variables x and y and to find its solutions graphically. Let us refer to the problem of investment in tables and chairs discussed in Section B. We will now solve this problem graphically. Let us graph the constraints stated as linear inequalities: 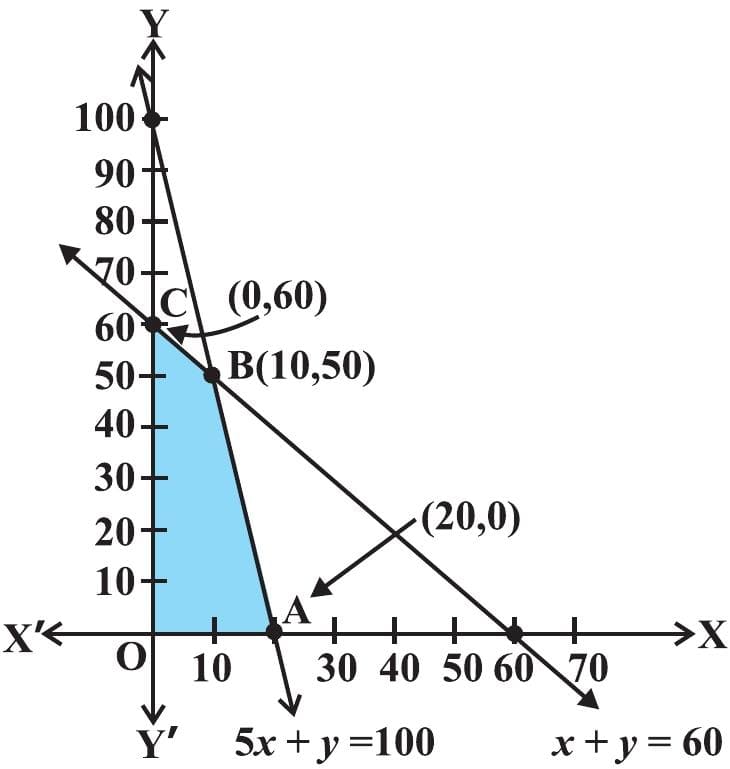 [Fig-B2a]
The graph of this system (shaded region) consists of the points common to all half planes determined by the inequalities (1) to (4) (Fig-B2a). Each point in this region represents a feasible choice open to the dealer for investing in tables and chairs. The region, therefore, is called the feasible region for the problem. Every point of this region is called a feasible solution to the problem. Thus, we have,

Optimal (feasible) solution. Any point in the feasible region that gives the optimal value (maximum or minimum) of the objective function is called an optimal solution.

Now, we see that every point in the feasible region OABC satisfies all the constraints as given in (1) to (4), and since there are infinitely many points, it is not evident how we should go about finding a point that gives a maximum value of the objective function Z=250x+75y. To handle this situation, we use the following theorems which are fundamental in solving linear programming problems. The proofs of these theorems are beyond the scope of the book.

Theorem 1: Let R be the feasible region (convex polygon) for a linear programming problem and let Z=a⋅x+b⋅y be the objective function. When Z has an optimal value (maximum or minimum), where the variables x and y are subject to constraints described by linear inequalities, this optimal value must occur at a corner point* (vertex) of the feasible region.

Remark: If R is unbounded, then a maximum or a minimum value of the objective function may not exist. However, if it exists, it must occur at a corner point of R. (By Theorem 1).

______________
*: A corner point of a feasible region is a point in the region which is the intersection of two boundary lines.
**: A feasible region of a system of linear inequalities is said to be bounded if it can be enclosed within a circle. Otherwise, it is called unbounded. Unbounded means that the feasible region does extend indefinitely in any direction.

We observe that the maximum profit to the dealer results from the investment strategy (10, 50), i.e. buying 10 tables and 50 chairs.

This method of solving linear programming problem is referred as Corner Point Method. The method comprises of the following steps:

1. Find the feasible region of the linear programming problem and determine its corner points (vertices) either by inspection or by solving the two equations of the lines intersecting at that point.

2. Evaluate the objective function Z=a⋅x+b⋅y at each corner point. Let M and m, respectively denote the largest and smallest values of these points.

3. (i) When the feasible region is bounded, M and m are the maximum and minimum values of Z.

(ii) In case, the feasible region is unbounded, we have:

4. (a) M is the maximum value of Z, if the open half plane determined by a⋅x+b⋅y>M has no point in common with the feasible region. Otherwise, Z has no maximum value.

(b) Similarly, m is the minimum value of Z, if the open half plane determined by a⋅x+b⋅y<m has no point in common with the feasible region. Otherwise, Z has no minimum value.

We will now illustrate these steps of Corner Point Method by considering this example below: 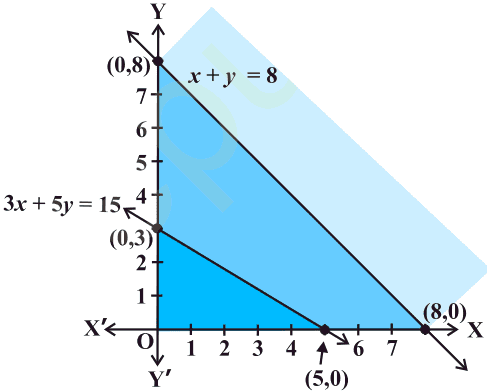