Geometric Sequence Problems
Problems of growth and decay involve repeated multiplications by a constant number. Therefore, we can use geometric sequences to model these situations. 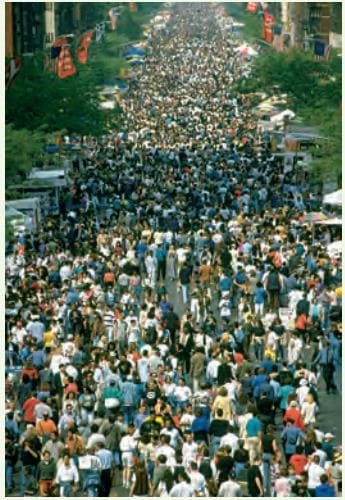 📌 Example 1: Geometric Population Growth
The table shows the population of the United States in 2000, with estimates given by the Census Bureau for 2001 through 2006.

b. The sequence of the U.S. population growth is

an=a1⋅rn-1.
In this sequence, a1=281.4 and [from part (a)] r≈1.011. We substitute these Values into the formula for the general term. This gives the general term for the geometric sequence modeling the U.S. population, in millions, n years after 1999.

or trial and error on your calculator gives n≈34 weeks.
The population will reach 500 early in the 35th week.

Use the formula for the nth term of a geometric sequence to find the a19.

📌 Ex6. (Horses) For each of the first few months after a horse is born, the amount of weight that it gains is about 120% of the previous month’s weight gain. In the first month, a horse has gained 30 pounds.
a. Write a geometric series in sigma notation that can be used to model the horses weight gain for the first five months.
b. About how much weight did the horse gain in the fourth month?
c. If the horse weighed 150 pounds at birth, about how much did it weigh after 5 months?
d. Will the horse continue to grow at this rate indefinitely? Explain.
✍ Solution:
a. The amount of weight that a horse gains is 120% of the previous months weight gain, so r=1.2. Because the horse gained 30 pounds in the first month, a1=30.

Write an explicit formula for the horse’s weight gain.

b. Use the explicit formula you found in part (a.) to find a4.

c. First, find the sum of the series.

d. Sample answer: No; the horse cannot continue to grow at this rate indefinitely because its body will eventually stop growing.


(1.2)n
(1.2)4=2.0736.
The fourth term of the sequence is 2.0736. It represents the magnification after the fourth click. So, the map will be magnified at approximately 207% of the original size after the fourth click.
💎 Let’s read post •Depreciation or Decay👈.
RELATED POSTs
What is a Sequence?
Get Terms from Sequences
Writing the First Few Terms of each Sequence (Writing a Sequence)
Determine whether each sequence is arithmetic, geometric, or neither
The General Term of Fibonacci Sequence
Translating from Recursive Rules to Explicit Rules (General Terms)
How to Describe every Arithmetic Sequence?
Get the Common Difference of each Arithmetic Sequence
Embed the link of this post
G. News 1G. News 2TwitterFacebookWhatsAppBufferLinkedInPin It