The second row of the table shows a geometric sequence where a1=2000 and r=2. Using the formula for the nth term of a geometric progression, then,

Here notice that we did not start the sequence with 1 000 since it is the initial number of bacteria in the culture and there are no doublings yet.

The problem can be modelled by a geometric series, which has 3 terms because 3 tablets were taken:

b) Determine the sum of a geometric series whose terms are the masses of the antibiotic in the body after 12 tablets. The series is:

The mass of antibiotic in the body after 12 tablets is approximately 227.27 mg, or just over 227 mg.
Fish Population 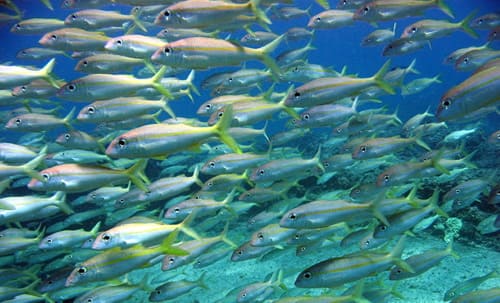 📌 Question 2. The caretaker of a local fish pond does not allow fishing unless there is an abundance of fish available. He estimates when the fish count passes 1, 000, he will open the pond to the public. The season-opening fish population was estimated at 60 fish, but weekly checks showed the fish count was doubling each week. How many weeks will it take before the pond will open?

✍ One Solution: This is an example of a geometric sequence in which each week the population is multiplied by 2, which means r=2. We need to find when the sum of the fish reaches 1, 000. We can write the formula in explicit form: an=60⋅2n-1. We want to find when an=1000. 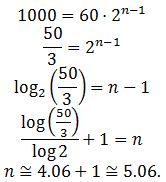 So, the pond should open in a little over 5 weeks.
Alternate Method:

Alternate Method: y1=60⋅2n-1 and y2=1000, graph and find the x-coordinate of the intersection.
RELATED POSTs
What is a Sequence?
Get Terms from Sequences
Writing the First Few Terms of each Sequence (Writing a Sequence)
Determine whether each sequence is arithmetic, geometric, or neither
The General Term of Fibonacci Sequence
Translating from Recursive Rules to Explicit Rules (General Terms)
How to Describe every Arithmetic Sequence?
Get the Common Difference of each Arithmetic Sequence
Embed the link of this post
G. News 1G. News 2TwitterFacebookWhatsAppBufferLinkedInPin It