Categories: boxplots, statistics
boxplots,statistics, how is a data set either symmetric or skewed? https://mathlibra.com/how-is-a-data-set-either-symmetric-or-skewed/

How is a Data Set either Symmetric or Skewed?

2. Box and whisker plot
We can represent the five number summary on a box and whisker plot (or diagram).
The box represents the middle half of the data (the interquartile range)
The line in the box shows the median.
The ‘whiskers’ show the minimum and maximum values

Quartiles divide data into four equal sets of data. The longer whisker and box means that the lower 50% of the scores is more spread out than the upper 50%.

Skewed to the right (Positively skewed) means that the upper half of the data is more spread out than the lower half.

Skewed data
A box and whisker plot can show whether a data set is symmetrical, positively skewed or negatively skewed. This box and whisker plot is not symmetrical because the whiskers are not the same length and the median is not in the centre of the box. The whisker on the left is a bit longer than the whisker on the right, which shows that the data on the left of the box is more spread out. The box is also longer to the right of the median than to the left of the median. We say that the data is negatively skewed. (or skewed to the left).

A Set of data with a symmetric distribution will have a symmetric boxplot.
The whiskers of the boxplot are the same length and the median line is in the centre of the box. 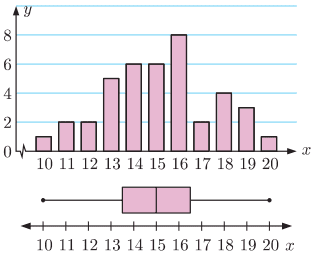 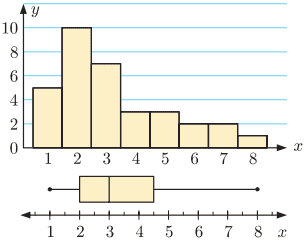 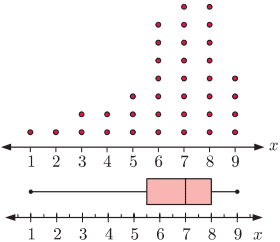 Problem 1. These are the scores of ten students in a Science test: 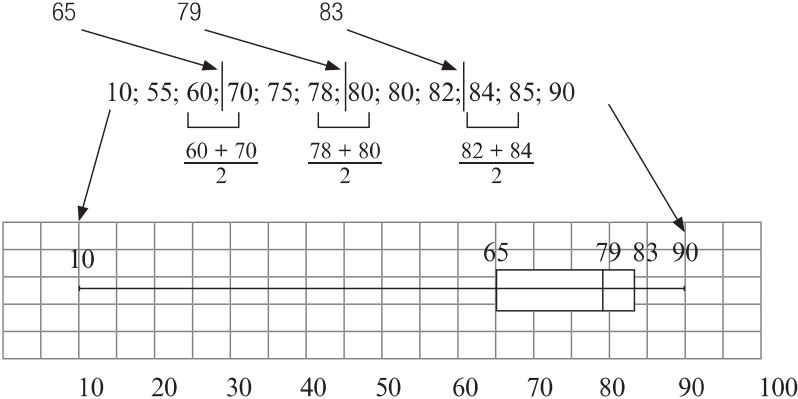 1. Symmetric and Skewed Data
The shape of a data set is important to know.

Definition: Shape of a data set
This describes how the data is distributed relative to the mean and median.

● Symmetrical data sets are balanced on either side of the median. It does not have to be exactly equal to be symmetric

● Skewed data is spread out on one side more than on the other. It can be skewed right or skewed left.

P3. Draw a box and whisker diagram of the following data set and explain whether it is symmetric, skewed right or skewed left.

Since the median is closer to the first quartile than the third quartile, the data set is skewed right.

We can conclude that the data set is skewed left for two reasons.
(i) The mean is less than the median. There is only a very small difference between the mean and median, so this is not a very strong reason.
(ii) A better reason is that the median is closer to the third quartile than the first quartile.

P5. State whether each of the following data sets are symmetric, skewed right or skewed left.
a) A data set with this histogram:

b) A data set with this box and whisker plot:

c) A data set with this frequency polygon:

Since these differences are so small and since they contradict each other, we conclude that the data set is symmetric.

Categories: boxplots, statistics
boxplots,statistics, how is a data set either symmetric or skewed? https://mathlibra.com/how-is-a-data-set-either-symmetric-or-skewed/