How often are you asked to negotiate your Marketing and SEO service Prices?

Kayle Larkin 🎓
How often are you asked to negotiate your service fees? 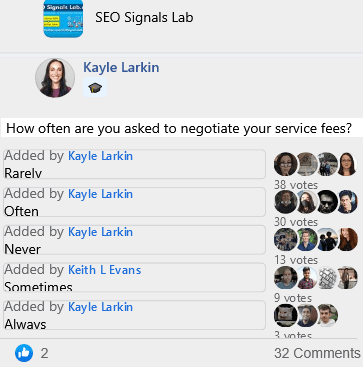 🔗🏹
2 👍🏽2 32 💬🗨
Corina
I was asked how I "compare" to my competitors locally. I said I don't feel I have any competition… 😉 I've been ranked position 1 for 7 years so far and I'm not bothered about what they charge.
(Some of them aren't local companies they're gaming Google, some are shockingly shit, 1 of them I've worked for before I was self employed, and I've had clients come to me after bad experiences with the other 3… 😂
Alex
Won't do it. Not ever, not for any reason. I will sell them a cheaper service, but on principle will not ever negotiate. I will not be in a situation where my best clients are the ones that pay more because they were nice and my worst clients are the ones that pay less because they try to get a deal.
Just an fyi – your website has 2 prices listed – so if you're running into a lot of people trying to negotiate that could be part of why.
💟👍🏽2
Kayle Larkin 🎓 » Alex
Thanks Alex!
I know haha. None of my business comes through my website. I always cringe when I hear someone sent a referral there 😬
It's in a redesign right now.
This question came about from noticing a trend in types of posts in other groups.
I'm curious about a few things 🙂
Is there a trend in demographics who field more negotiations than others?
Is there a trend in demographics who succumb to negotiations more so than others?
And I plan to study costs 🙂 by demographics, experience/education, niche, service offering, etc
Alex » Kayle Larkin
That is good, it needs it lol.
I get people telling me they can't afford me, but people don't generally try to negotiate with me. I do web design and marketing for small to medium sized businesses in any niche. Everything we do is custom, so the people interested in our services usually want quality and focus on that more than on trying to lower prices.
I also don't charge enough though lol.
🤭1

Truslow
Here are some numbers for the "sexism" stuff mentioned above:
I'm in a fairly unique situation, I think. I white label myself to several different agencies. The two that provide me the most work (about 70-80% of it) also have the same core "workhorse" team. Except for myself, that core team is all female as are the agency owners who book the jobs and oversee everything. As such, I can say that the all-but-me female team has no problem charging top dollar for our services.
In only two cases over the past 8 years I've worked for these agencies, only 2 clients have given us issues in terms of what would be deemed sexism. The business owners were generally (and both unabashedly) sexist. If one of the women on the team brought up an idea – it would invariably be questioned and picked apart. If it was me who outlined the idea and presented it, it was greenlit immediately. In those two cases, I simply took on the role of "speaker" (even though the actual jobs and organization behind the scene didn't change) and we managed it that way.
At no other times have I really felt an issue with pricing, nor companies wanting to negotiate. And, in our case, it's certainly not sexism – the Grrl Power team I work with lands great paying gigs and all I need to do is the tech SEO work and consult on strategies.
I think the difference though is in how success is measured. Many SEO folks define success by "top rankings" or "more traffic." These are pretty useless goals because it's impossible to describe or even see a value there. We start by talking about how many leads/sales a client gets now. If it's leads they are after, we ask their current conversion rates (how many contacts per month – and how many of those convert).
In our objectives, we then set reasonable targets to increase the number of leads they get per month. And in many cases, we'll offer up options that include CRO (Conversion Rate Optimization) to make it so each lead is more valuable.
Now, just knowing the average sale, you can say how many leads and/or what percentage of conversion rate improvement is needed to make us pay for ourselves.
Typically it works out like this: In the first few months, we'll cost a lot. By month 3-4, we're not costing anything, but still eating to big a chunk of their margins. By month 6-7, now we're at a point where their SEO/Digital Marketing/CRO stuff is in line at about 10-15% of their revenues. (More competition can mean longer path to reach those numbers, but generally those work).
Those are goals and objectives that the client can see value in – so there's no questioning the cost. That's what it's going to take to get to that goal in that timeframe. Want to pay less and it's going to take longer to start breaking even or it's going to have a final resting place that's higher than that target 10-15%.
We typically provide a tiered option set too. Here is the bare minimum it's going to take to reach our target goals. If you want to spend a bit more, we can reach them a bit quicker and/or work on other things that can increase margins. (For example, I often put together warehouse logistic plans that tie into the web site so that pick and ship procedures are more streamlined – or we set up a Customer Relationship Management (CRM) for them that cuts back on labor time and so on.
All of those things have a "value" that someone not familiar with Search Engine Optimization (SEO) and digital marketing can see. So long as we stay close to being on track with our goals – then there's never a problem. If we fall behind, they fire us.
SEARCHENGINELAND.COM
More than 70% of SEO users in the U.S. are men, make more than female colleagues

Corina » Truslow
Where am I missing the sexism comments? Did it get deleted?
Truslow
Keith talked about men making more and women less in Alex's comment thread above. Kayle asked for some statistics on that.
Kayle Larkin 🎓 » Truslow
Thank you for sharing this article.
The data is too small to be conclusive, in my opinion (652 globally.)
The recent pay gap survey the article cites is by Bright Local and ONLY for local SEO.
I'll have to read the full survey conducted and analyzed by a woman because it may answer some of my questions:
But really I want to see more of the why.
Is it the services offered (content – strategy – technical – included in a site build)
is it the type of businesses serviced (local – national – eCom – global – enterprise – small)
Is it the region?
Is it confidence?
Is it connections and education?
I wonder if she'd let me see the original survey questions 🤔 …I'm going to ask
*I also want to add this isn't about women/men exclusively – genuinely curious if there are trends in demographics that are asked to negotiate more so than others – and then I will seek why that may be
Truslow
There's a Women In Tech SEO group that may be able to get you more accurate numbers.
@techseowomen <— Twitter
<— Web Site.
Not sure everything they do, but their stuff on my Twitter feed is usually interesting. Might be worth a look-see.
Women in Tech SEO | Global Community
WOMENINTECHSEO.COM
Women in Tech SEO | Global Community
💟1
Kayle Larkin 🎓 » Truslow
Part of it 🙂
Truslow
Nice! I'll see if anyone on our team is involved in any circles that might have that sort of data, too.
🤔1
Kayle Larkin 🎓 » Truslow
Moz sent surveys out to their user base and advertised on their social marketing platforms.
I'd like to revisit the questions asked to include additional variables like tier of client and service offering, channel/sales process.
Then send a uniform survey out on as many platforms that would allow: Ahrefs, SEMrush, SEJ.
🤔 multi-reply may be a challenge to sort if pooling the data to protect identity
Also, yes I'm female but this question wasn't posed to discuss women. It was to see if there was a trend – whatever that trend may be.
I analyze data 🤷🏻‍♀️ that's my role so I very much have a neutral view and if I have any bias I try to disprove it – that's my nature.
I do not personally have difficulty with negotiating.
Truslow
Right… My post was more about the suggestions in the other thread that it might be about that. From my experience with a team that is almost all women – and sold/negotiated by all women, we don't see haggling. There's definitely bias in the industry itself, but I don't see it in terms of being the cause of haggling. And sorry – I didn't mean to devolve the conversation to that. 🙁
🤔1
Kayle Larkin 🎓 » Truslow
I enjoyed our conversation ☺️ ✌🏻

These may satisfy you:
» Adding Up Backlinks Price to SEO Service Basic Price. Is It Okay?
» Let Us Increase the Prices of SEO Services and Content Production by 50%!

RELATED POSTs
Comments on an SEO Low Price Range on Rate $300-$500 a Month
How many USD should we charge a New SEO Client?
Let Us Increase the Prices of SEO Services and Content Production by 50%!
Price Variation for an Article Around 1500-2500 Words
The SEO Difference of Two Different Prices
Re-Invest the Money You Earn from SEO!
How hourly Rate do You Price Your SEO Services?
A 2000 Word Blog Post versus Two 1000 Word Ones a Week
Embed the link of this post
G. News 1G. News 2TwitterFacebookWhatsAppBufferLinkedInPin It

Category: SEO Pricing
seo pricing, how often are you asked to negotiate your marketing and seo service prices? https://mathlibra.com/how-often-are-you-asked-to-negotiate-your-marketing-and-seo-service-prices/