Sesum
The amount of people that willingly make their entire businesses dependent on Google and then piss & moan about them gets bigger every day. Now you want to sue Google because they mistakenly take away the Google My Business (GMB) platform that they gave you for free in the first place?
Simple solution… have a business that isn't wholely dependent on Google then this stuff won't have as big an impact. Learning how to utilize paid ads properly might also be an idea, seeing as that's what Google actually wants you to do anyway. My Google Ads campaigns have never once gone down in over 12 years. Or, you know.. think about other types of marketing. They do exist, and they do work.
Just a suggestion.
💟👍🏽5
Tina ✍️ » Sesum
Where have I said I want to sue Google?
If they cant run a platform that's free properly then remove it from use entirely or charge us to use it and offer a better support! They are quite happy to chat about our Google Ads though as that involves payment to them. Its pretty clear Google want us to pay for service so charge us for our GMB platforms. Local businesses rely heavily on GMB as they get a lot of leads from it.
Some people cant afford to pay for Google Ads or any other ads.
We do do other types of marketing as well, not just relying on Google My Business (GMB).
Maybe don't think everyone with small budgets can afford Google Ads constantly, or that they don't do other marketing… just a suggestion
Sesum » Tina
Yes, Google want to make a profit… anything else hurting your sensibilities? They don't owe you or anyone else a living. Should GMB work properly? Yeah, sure it should. But it doesn't, because that's how big worldwide conglomerates work. They have glitches and crap customer service, just like everyone else. Acting like the world is a perfect place and setting up your business to rely on handouts is stupid and pathetic.
'can't afford to pay for Google Ads'… Jesus Christ. 🙄 The point of marketing is ROI, it's not a cost it's an investment. If you can't grasp this then my advice is to go get a job becasue you aren't cut out to be in business.
Tina ✍️ » Sesum
How is GMB a handout. I think the way you speak to people is actually disgusting. Would you speak to a client using the words you have said, no!
I also haven't actually said my clients cant afford paid ads and that they are willing to take the money for "our paid ads".
Maybe try reading what I have actually wrote.
Matt » Sesum
As a 7 month old service business, when all your competitors have Google it doesn't matter that you have other types of marketing, it's still going to slow your new customers. I have many other forms of marketing and paid ads, you can't sit here and tell me that any other form of online advertising is as powerful as GMB, went from top 2 in the map pack, to disappeared.
Also, not because they mistakenly took many business listings down, but because they have no reasonable way to contact them to get it straightened out, their emails are the same automated responses that do nothing. Words spoken from a person who hasn't had their listing removed in the first 12 months of business.
Maybe don't assume what other people are doing when it comes to marketing and act like you're the almighty
Just a suggestion.
I built an electrical and plumbing business from scratch to high 5 figure turnover, 4 staff and 2 vans in less than 18 months, with no online marketing whatsoever other than a simple Wix website.
No GMB, no Search Engine Optimization (SEO), no flash website.
People just don't understand marketing and what it actually is because they don't bother to learn.
You getting triggered doesn't mean that I'm acting like the almighty. I just find people who piss, moan and look for excuses pathetic.
💟👍🏽4
Tina ✍️ » Sesum
No but your acting like a troll because you have a different opinion to others. You are rude and condescending
Matt » Sesum
If you understand marketing so well, you would understand every market is different. When your competitors are all on GMB, new customers are not going to find you and choose to go with you. That was not me getting triggered, that was me saying that you're acting like an ass.
What you did in your market however many years ago is not the same as everyone else's market. I didn't piss, moan or look for excuses, simply stating that Google is in the wrong for what they're doing.
Once again you're acting like you know what someone else is doing, acting like you're gods gift to earth, when you know nothing about what other business owners are doing.
Tina ✍️ » Matt
He clearly doesn't understand marketing very well as most local people will click a GMB profile before the actual Search Engine Result Pages (SERPs).

Sesum » Matt
What I did in my market was between 2012 and 2016, it wasn't 'many years ago'. I have since replicated the same principles in several other businesses and still doing it right now to this day. What you, and many others don't seem to understand is that the most important thing is to get your message in front of your market. You don't wait for them to come to you, and it does NOT matter how you do that, whether it's online, offline, digital, physical, print, video… all that matters is that your offer has a place in the market and that your message gets in front of someone it resonates with, who needs and more importantly wants what you have to offer. That's it.
With regards to your own comments on marketing, with all due respect, you don't even understand the fundamentals. You think a customer isn't going to find and choose to do business with you because you're not on Google My Business (GMB)?? That alone is laughable. Just this month I took on a client who installs garden lighting. His business is new, he has no customers, no website, no GMB, no online or indeed offline presence whatsoever. The first thing we did was make a list of 200 upscale landscapers and garden designers and mail them a letter with a brochure.
Why?
Because these businesses can both give him business AND have access to his ideal customers!
He now has £12,000 worth of work booked in because we didn't piss about taking weeks to set up a website, driving traffic, perfecting campaigns and GMB blah, blah, blah… we just went straight to where the people were who needed and wanted his service.
Common sense.
We got £12,000 worth of work where the average 'digital marketer' would have achieved zero, would want no accountability, yet would still want to be paid.
As far as my supposed attitude goes, if you keep talking and acting stupid, pissing and moaning about things that you have the power to change then what do you expect me to do? I couldn't care less.
Your lack of knowledge in your chosen profession is startling. You need to up your game and grow a much thicker skin.
🤭1
Tina ✍️ » Sesum
You're still going with your insults I see! There is no need to call people stupid. Just because you do something that others might not do does not make then stupid. Go and troll someone else and as for your clients, I wouldn't have you working for me your manner and disrespect says a lot about you as a person. Some people on this group are just starting out, some are experts and to insult a persons knowledge is pathetic. If you want to go around your day to day life acting like a troll, insulting peoples skills and intelligence then you also have a lot of learning to do. You are in a group that is about Google My Business (GMB) and local Search Engine Optimization (SEO) and yet you seem to disagree with people using GMB and local SEO as far as I can see you are an electrician that also uses GMB and local citations
Eric
Yeah, had this happen with a large heating and cooling company. Large building, signage, fleet of nearly 50 trucks and they still suspended the page. Despite a nice marketing portfolio, rankings tanked fast. It was two months of hell.
Josh » Eric
How did you get it rectified?
Eric » Josh
It was at the height of the pandemic and after multiple appeals that took weeks for a response we were getting nowhere. Out of desperation, I contacted a company called Steady Demand – the have an in with the GMB people – and he had it fixed in two or three days.
💟👍🏽2

Josh » Eric
Okay, that sounds…about right honestly. 🤔 I'll check this Steady Demand company out. My company will offer ad and GMB account management soon so I'm just here taking notes 😬😎
[GIF]
💟1
Eric » Josh
Ben Fisher there was incredible. If you're in a big GMB jam and nothing else is working, they definitely have you covered.
💟1
Josh » Eric
Alright great! Let me save this info 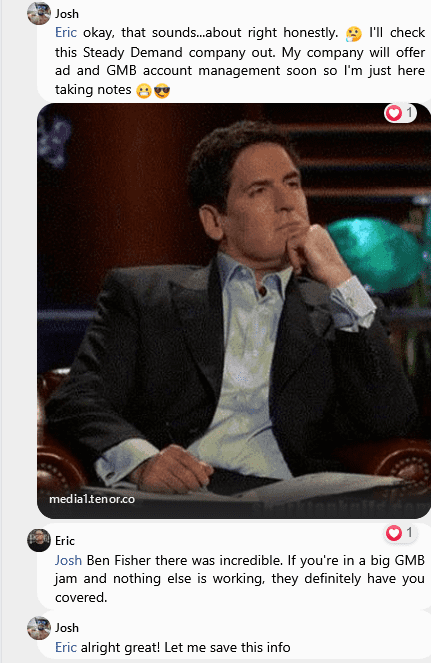 🔗🏹
Sampson
Same here other day one was suspended sent off appeal received no call next day suspension lifted i think there bots are playing up humans don't suspend its there program
Victor Perez 🎓 » Sampson
It would not be possible to create a large enough team of staff members to actually check each business suspension and reinstatement request.
Sampson » Victor Perez
Yes of course would be nice if they had some better programming as genuine companies are being suspended for know reason
Victor Perez 🎓 » Sampson
Yeah this is pretty much the result of their work on the algorithm. I think they might prefer to not let us know the issue cause that could also be used to reverse engineer and try to get extra listings.

Victor Perez 🎓
Did you file for reinstatement?
Unless you're breaking some rules you should be able to get it back up.

Srinath Rangaswamy 👑🎩
Google My Business is very useful for small businesses wanting to compete against the big folks. Otherwise, it would be FB/Insta, Amazon/Shopify, and the Yelp/yellow pages who would be milking them.
One of the reasons that Google struggles with the support is the surge of businesses over the last 2 years wanting to be on their free platform and using every trick including fake listings to show on the map.
Regarding the monthly fee for better support – I am a votary for it but supporting over half a billion businesses with world-class support is well nigh impossible.

These may satisfy you:
» 7 Points to Improve Our Local SERP Rankings through Google My Business (GMB) optimization
» Could We Offer a Gift Card for Review? Offer a Reward for Who Leaves Feedback?

RELATED POSTs
Most of the People Make these Mistakes While Creating or Optimizing Their or Their Client’s GMB Listing
Should We Launch an E-Commerce that Isn’t Finished Yet in Development?
Comments on SEO Price Range for E-Commerce
Is WordPress Not Always Suitable for Urban Businesses e.g. Restaurants?
How Can a Small E-Shop Have Chance to Get Traffic While Large E-Shop Posts Lie Down on the SERPs?
7 SEO Steps for Website Rehabilitation after Google Updates
May a Facebook Group Be a Place to Gain Google My Biz 5 Star Rating Each Other?
Most Votes of a Poll Said That Citations Are Extremely Important for Urban and Rural SEO
Embed the link of this post
G. News 1G. News 2TwitterFacebookWhatsAppBufferLinkedInPin It