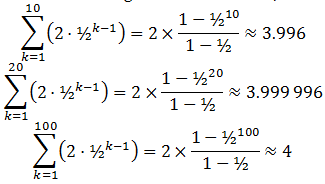 As the number of terms increases, the partial sum appears to be approaching the number 4. This is no coincidence. In the language of limits,


¼+⅛+1/16+1/32+⋯ for n terms
in sigma notation. Notice that the instructions specify that the lower limit of summation should be 1 and the variable k. So that would be a good thing to adhere to.
Solution:
Geometric, with a ratio of ½. Same deal as before; I need a formula for ak.

So there are two different nice ways to write this.

One thing to be made clear about infinite series is that they are not true sums! The associative property of addition of real numbers allows us to extend the definition of the sum of two numbers, such as a+b, to three or four or n numbers, but not to an infinite number of numbers. For example, you can add any specific number of 5s together and get a real number, but if you add an infinite number of 5s together, you cannot get a real number! The remarkable thing about infinite series is that, in some cases, such as the example above, the sequence of partial sums (which are true sums) approach a finite limit L. The limit in our example is 4. This we write as

limn→∞ ⁡∑nk=1 ak =limn→∞ ⁡(a1+a2+⋯+an)=L.
We say that the series converges to L, and it is convenient to define L as the sum of the infinite series. We use the notation 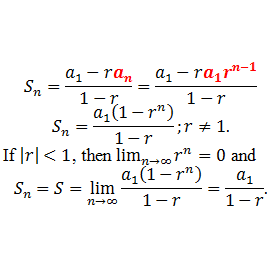 We will call this the sum of the infinite geometric series. In all other cases the series diverges. The proof is left as an exercise.

Looking Ahead to Calculus: Infinite Series

As indicated above, each sequence {an} is associated with a sequence of partial sums {Sn}, where Sn=a1+a2+⋯+an. What happens to Sn as n gets larger and larger, that is, as we add more and more terms? We are considering an “infinite sum” written as a1+a2+a3+⋯, or in summation notation,


∑∞n=1 an
This is called an infinite series.

Since we cannot add an infinite set of numbers, we need instead the notion of a limit. In one sense, calculus is the study of limits. It is beyond the scope of this book to deal with infinite series in general, but for a geometric sequence {an}, we can at least get an intuitive feeling for what happens to Sn as n becomes large. For example, where

it is reasonable to assume that 1/2n gets close to 0 as n becomes large. In calculus notation limn→∞ ⁡1/2n=0, from which limn→∞ ⁡Sn=⅔.

We say that the infinite series,

converges to ⅔, and we write

In general, we associate each geometric sequence {a⋅rn-1} with an infinite geometric series

which depends on limn→∞ ⁡rn. Looking at different values of r, we conclude that if r is any number between -1 and 1, then limn→∞ ⁡rn=0, from which

If |r|≥1, then the infinite series does not have a sum, and it diverges.

Solution:
We substitute k=1 into the formula 13/100k and add successive terms until we reach k=4.

Equation-A. Sum of Geometric Sequence:
• The sum S of the first n terms of a geometric sequence ak=a⋅rk-1 for k≥1 is

We close this section with a peek into Calculus by considering infinite sums, called series. Consider the number 0.9. We can write this number as

It stands to reason that 0.9 is the same value of

Our knowledge of any exponential expressions tells us that

We have just argued that 0.9=1, which may cause some distress for some readers.7 Any non-terminating decimal can be thought of as an infinite sum whose denominators are the powers of 10, so the phenomenon of adding up infinitely many terms and arriving at a finite number is not as foreign of a concept as it may appear. We end this section with a theorem concerning geometric series.
💎 Let you read a next post, how to express a recurring decimal as a fraction ?
Theorem-A. Geometric Series: Given the sequence ak=a⋅rk-1 for k≥1, where |r|<1,

The justification of the result in Theorem-A comes from taking the formula in Equation-A for the sum of the first n terms of a geometric sequence and examining the formula as n→∞,. Assuming |r|<1 means -1<r<1, so rn→0 as n→∞. Hence as n→∞,

As to what goes wrong when |r|≥1, we leave that to Calculus as well, but will explore some cases in the exercises.
_____
7 To make this more palatable, it is usually accepted that 0.3=⅓ so that 0.9=3(0.3)=3(⅓)=1. Feel better?
💎 A simpler thought than this page is the next page of Sigma Notation Examples about Infinite Geometric Series.
RELATED POSTs
What is a Sequence?
Get Terms from Sequences
Writing the First Few Terms of each Sequence (Writing a Sequence)
Determine whether each sequence is arithmetic, geometric, or neither
The General Term of Fibonacci Sequence
Translating from Recursive Rules to Explicit Rules (General Terms)
How to Describe every Arithmetic Sequence?
Get the Common Difference of each Arithmetic Sequence
Embed the link of this post
G. News 1G. News 2TwitterFacebookWhatsAppBufferLinkedInPin It