Series
In this section we simply work on the concept of adding up the numbers belonging to arithmetic and geometric sequences. We call the sum of any sequence of numbers a series.


Sn=a1+a2+a3+⋯+an
For example, if we have the following sequence of numbers

S4=1+4+9+25=39
The above is an example of a finite series since we are only summing 4 terms.
If we sum infinitely many terms of a sequence, we get an infinite series:

S∞=a1+a2+a3+⋯
In the case of an infinite series, the number of terms is unknown and simply increases to ∞.

And the sum of the first five terms is

we can see they form the beginning of another infinite sequence. The n-th term of this sequence is the n-th partial sum. We can see that the partial sums here form a sequence that has limit 1. So it would make sense to say that this series has sum 1. We write

In general, we say that an infinite series has a sum if the partial sums form a sequence that has a real limit. If the series is

To find the sum of this series, we need to work out the partial sums. For this particular series, the best way to do this is to split each individual term into two parts:

If we do this to each term, the series becomes

and so the n-th partial sum is

As you can see, most of the terms in this expression cancel in pairs. We just get the outermost two terms,

So the sequence of partial sums is

and this sequence has limit 1. We say the infinite series sums to 1, and we write

Here is an example of an infinite series that does not have a sum. The series

Figuring out whether a series is convergent or not is harder than it looks. It’s not enough for the terms to be getting smaller as n gets large. For example, the series 1+½+⅓+¼+⅕+…+1/k+⋯ looks like it might converge (i.e. this series has a finite sum), but it does not. A series that doesn’t converge is said to diverge.
The series 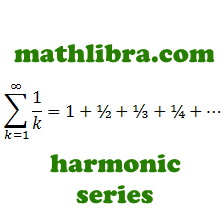 is called the harmonic series, and it has terms that tend to zero. But the sequence of partial sums for this series tends to infinity. So this series does not have a sum.

Key Point: The n-th partial sum of a series is the sum of the first n terms. The sequence of partial sums of a series sometimes tends to a real limit. If this happens, we say that this limit is the sum of the series. If not, we say that the series has no sum. A series can have a sum only if the individual terms tend to zero. But there are some series with individual terms tending to zero that do not have sums.