Is Jarvis counted as an SEO Friendly Content Creation Tool?

Mew 👑🎩
I didn't think much of Jarvis to begin with, and now I really can't even recommend it. Shady tactics afoot.
Search Engine Optimization (SEO) Tool Creators and Tools Created That Help SEO users just get worse and worse every year as it pertains to transparency in marketing.
With that said, has anyone increased their Monthly Recurring Revenue (MRR) what looks to be 500%+ in less than a year because of Jarvis? Just curious 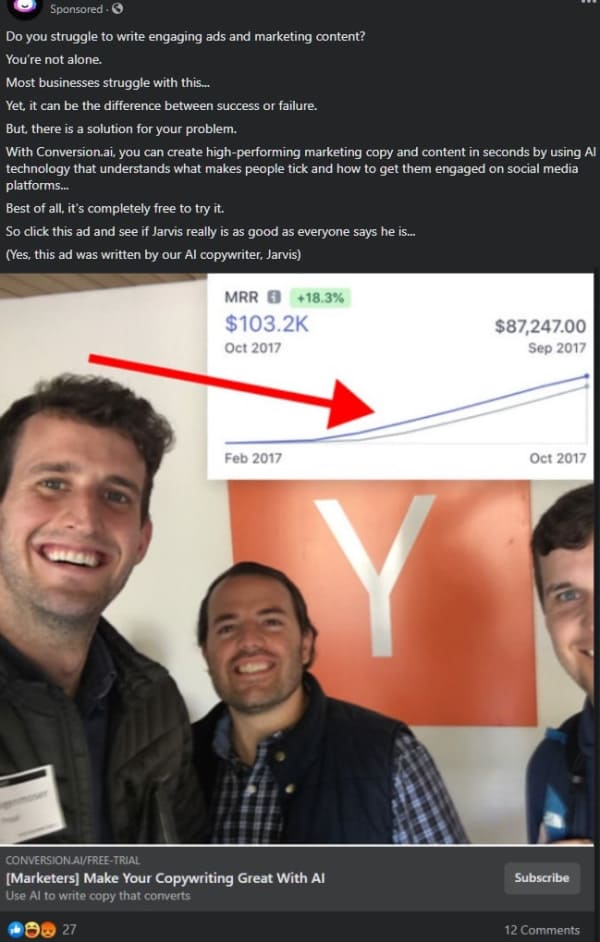 🔗🏹
27 👍🏽2 🤯30 42 💬🗨
Matthew
I haven't. But I use Jarvis and it is more valuable to me than having the $150 odd per month I pay for it back in my pocket. If I cancelled the tools I used based on them not living up to the hype of their marketing I wouldn't have any tools left and running my profitable business would be much more difficult.
Mike 🎩
I think you kind of missed the point of that ad copy.
Anyhow, it works great for me. No complaints here.
Mew ✍️👑 » Mike
Is the point that using Jarvis is going to make my MMR increase 400%?
Mike 🎩 » Mew
I don't think they claimed that at all.
Mew ✍️👑 » Mike
The picture they are using is absolutely claiming that as an association. You can say it's not on a technicality but let's be real here. That's exactly why they added it, for loose association purposes and unsuspecting marketers.
Their reviews on their website aren't even real. I tried to reverse search them and 80% are unable to be found anywhere but there. I guess people must of snail mailed them directly.
Scam Artists here with a sub par tool that can not replace a real writer in any way shape or form.
That's my thoughts and I'm sticking to them! 🙂
Mike 🎩 » Mew
Maybe the results were real for that one person. That doesn't mean those are the results everyone is going to see, nor are they claiming that.
It would be no different than you putting a review or mention on your site about one of your clients seeing a XXX% gain in revenue after working with you. Doesn't mean everyone who signs up with you is going to see the same thing.
Mew ✍️👑 » Mike
I 1000% disagree because I'm an honest marketer. But I also do my job.
Different strokes for different folks 🙂 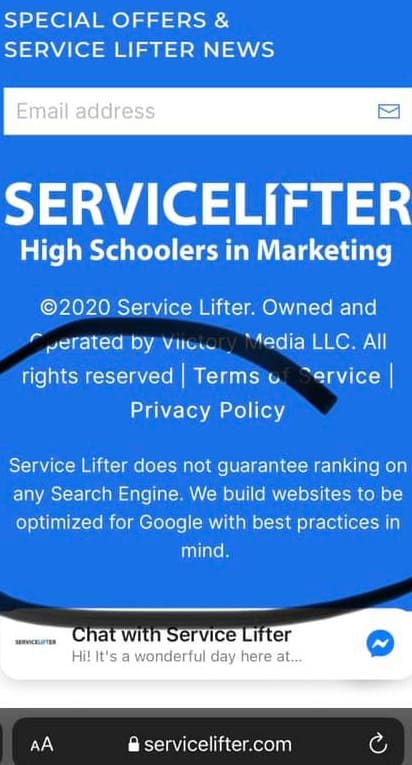 🔗🏹
Mike 🎩 » Mew
I didn't see anything in the ad for Jarvis guaranteeing anything either.

Aamir
These guys are just expert in marketing and they became famous because of their high affiliate commission.
The tool itself is a shit and produces a crap content.
🤭👍🏽4
L.E. McArthur
I could smell it. I'm in a lot of FB groups related to marketing and it seems they have people planted everywhere singing their praises. Yes, some people really do like and use the tool, but it's clear there are also a lot of people being paid to casually recommend it every chance they get. Subtle, but not subtle enough. And yes, shady as f.
💟👍🏽4
Reed
Jarvis wasn't around in 2017.
Those numbers are probably from their other business https://useproof.com/
They trained Jarvis on marketing copy they used and other copy that they have liked over the years.
USEPROOF.COM
Proof – Increase Online Sales & Conversions With Personalization

Altman » Reed
Yeah, that is a bit odd. Why use it in an ad?
Reed » Altman
It gets you to stop the scroll. The controversy of it led to this post in a group of 53K+ people. Someone is bound to try it out just out of curiosity.
Altman » Reed
Sure. I am using it. Its just odd. Gpt-3 wasn't even released then.

Marko
Jarvis can help you make money. If you hire a person on Upwork that charges $10/1000 words, you'll probably waste your money. If you pay $40/1000 words, you might get some decent content. For $120/1000 you'll get something very good that's ready to be published. Jarvis is around $120/mo and you get unlimited words. It's a pretty good investment in my opinion.
Mew, If you can, please review this site and check out the tool: https://audiit.io/
Kindly review the video under "how it works". The video is proof that the tool is completely useless but is promoted by the admin of a well-known SEO group. I feel sorry for people who believe the tool can help them enhance their results in search engines. The industry is full of scammers or people who don't really know what they are doing. 400% or 100%, Jarvis still gives more than any other person can for $120.
Roy
Jarvis is working very good for me. You need to know how to use it though.
Umair
no tool is 100% accurate, Jarvis is good but soon it will generate scrape content. first, you waste a lot of time on Jarvis to generate one article. i always prefer to write articles manually beause I can think about user intent and also I can optimize the content on my keywords naturally.
for a long term, Jarvis is not going to help you.
Gregor
With their shady marketing tactics, I am sure their Monthly Recurring Revenue (MRR) will go 💩.
Like I was shocked when I signed up for their trial for Longform. Longstory short, their marketing tactic was that it is available in both packages. Well, guess what. It is not. I signed up for 29$ per month and longform is only available in the big trial. 🤡🤡🤡🤡🤡 there was nowhere shown that longform is not available in small trial. 🤡🤡🤡🤡🤡 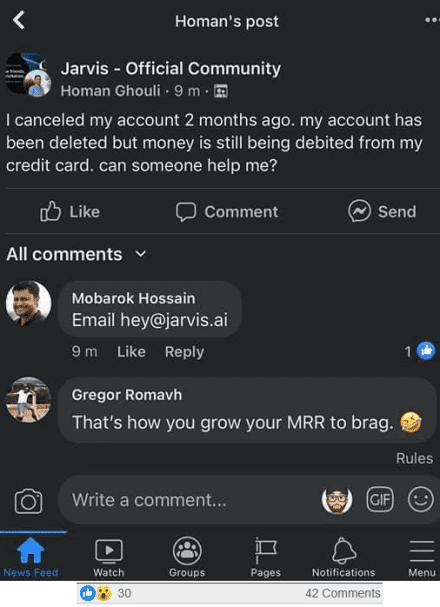 🔗🏹
Mutahi
As a freelancer who writes content 24/7/365, Jarvis has been great for me.
It's not going to be your "freelance writer" if that's what you expect.
No!
Rather, it's best used to complement what YOU write. I use it to power through the parts where logic (not research) is needed.
It'll help you blast through writer's block too.
I bet tools like Photoshop are as great as the user behind them.
My advice is, take a minute to figure out how it works.
For the ads, I can't say much. All ads are shady nowadays
Jerry
I'm in so many different groups (outranking, Jarvis, here etc) and everywhere is the same conversation "XYZ is not good, they can't be trusted. Shady. Bad marketing. Expensive. " and I get it.
However, these are just tools. You can give 2 people a bunch of ingredients, the same recipe and kitchen but does that mean they both can prepare a delicious meal? Definitely not!
Jarvis is a good tool, depending on what you use it for, and how you are willing to use it.
It is definitely not a magic button you press that writes the perfect content. A lot of times it doesn't make sense the direction its heading in regards of flow etc BUT… You have tools and commands available that will help you but these take some time to learn which most people don't. They are quick to say that it is shit, and then jump on the negative band wagon…
Furthermore, the $129 package per month is what really sets this apart compared to the cheaper options… Sadly, rather than saying it's too expensive (which it can be but when used in our field can be justified!) they say it sucks…
And that is the same for ALL tools out there…
I love using Jarvis, but combined with outranking for my outlines and then of course other tools for keyword research etc. Then Grammarly pro and CopyScape for the tweaking, and a final proof read by our proof reader.
But what really makes this tool (like all the other tools available) is your own brain power and still willing to put in the effort to turn (incredibly quickly generated) content, into content worth reading and foremost, content that ranks!
Mew and in regards of the ad, bit weird to use 2017 graph while Jarvis wasn't around and arguably a bit misleading, BUT a lot of people in groups are talking about this particular ad that is bound to arouse curiosity and sign ups… And the copy itself doesn't mislead, it's just how we interpret the image.
I'm sure from this ad they will generate a whole bunch of Jarvis fans and of course the nay sayers… And so the digital space continues to flow!
Martin » Jerry
This is a great analysis. I also like that it works with surfer
Jerry » Martin
I agree! Right now, for the amount of projects I have, the AppSumo Outranking deal suits me but once workload increases again, then Surfer is the business!

Daniel
Lol … I feel you. It is the wild wild West these days especially Search Engine Optimization (SEO) has become littered with skewed not transparent straight up lying marketing. It is crazy. And yeah I agree you they must have had a retarded circus monkey writing ad copies to experience such an increase because an AI started writing it for them Lmao 🤣😁
Ryan
"this ad was written by my pet monkey"
🤭1
Viktor
I use Jarvis and it helps me be more productive in my writing. I find it especially good when I need to creatively rephrase a sentences. I still need to write and do research, so its more of a booster for me.
(Yes, this comment was written by Jarvis /s)
Martin
I started a trial of Jarvis yesterday
I can see there's a learning curve but if you work with it as a helper, it can definitely be a productive tool. Wouldn't trust it to put out a full article though
You can tell when you're reading unabridged AI because it may be Grammarly correct but it tends to not actually say anything
Ironically quite a few of those are #1 ranking articles
Johnson
Sorry got rid if Jarvis, didn't think it was tat good, it repeated itself all the time and always tried to close the sentence
Tye
That's great that it was written in AI. Now tell me who edited it. Oh right it was a human.
Brian
If you don't know how to monetize content, Jarvis is a money suck (like any tool could be).
If you know how to monetize content, Jarvis is awesome.
We are magnitudes more efficient now on the content side.
💟👍🏽2

Morgan » Brian
Agreed. A hammer is dangerous in the wrong hands. However, many a tree houses were built with it.

These may satisfy you:
» Jarvis Conversion.AI Review
» How to Find the Best SEO Friendly Writer?

RELATED POSTs
This Guy Had Got Employees to Build Up His Sites
I Want My Writers Are Rich In Research Before Writing
Why Do Neil Patel and Ubersuggest Seem Funny?
Price Variation for an Article Around 1500-2500 Words
The Difference Between Trust Flow and Domain Authority
Is It Worth Switching From WordPress to Shopify or WooCommerce?
Looking for Cheap Writing Services Who Are Skillful
Content-Length Is No Longer a Matter!
Embed the link of this post
G. News 1G. News 2TwitterFacebookWhatsAppBufferLinkedInPin It