Linear Programming: Finding the Maximum with a family of Parallel Lines

A BIG IDEA of linear programming
If the feasible set of a linear programming problem with two variables is bounded (contained inside some big circle; equivalently, there is no direction in which you can travel indefinitely while staying in the feasible set), then, whether the problem is a minimization or a maximization, there will be an optimum value. Furthermore:
▸ there will be some corner point of the feasible region that is an optimum
💡 if there is more than one optimum corner point then there will be exactly two of them, they will be adjacent, and any point in the line between them will also be optimum. 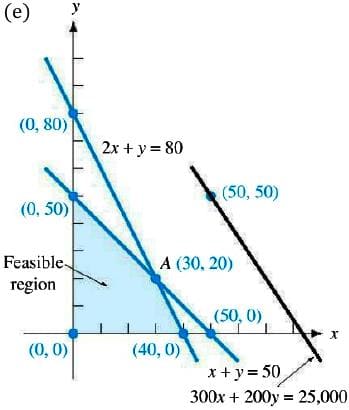 Linear programming is a strategy for finding the optimum value – either maximum or minimum – of a linear function that is subject to certain constraints.

These constraints, or restrictions, are stated as a system of linear inequalities.

a) If the feasible region is bounded the objective function will have both a maximum and a minimum.

Note: If the optimum value occurs at two vertices, its value is the same at both vertices and along the line segment joining them.

Rewriting the objective function z=x+3y in slope-intercept form gives. This equation represents a family of parallel lines, one for each value of z.


z=3x+2y [Objective function]
subject to the constraints listed below.

Solution:
The constraints form the region shown in Figure B. 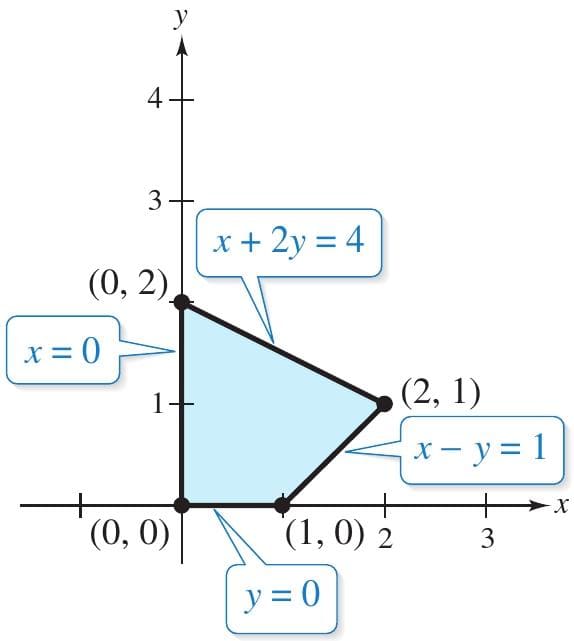 [Figure B]
At the four Vertices of this region, the objective function has the values listed below.

In Example 2, test some of the interior points of the region. You will see that the corresponding values of z are less than 8. Here are some examples. 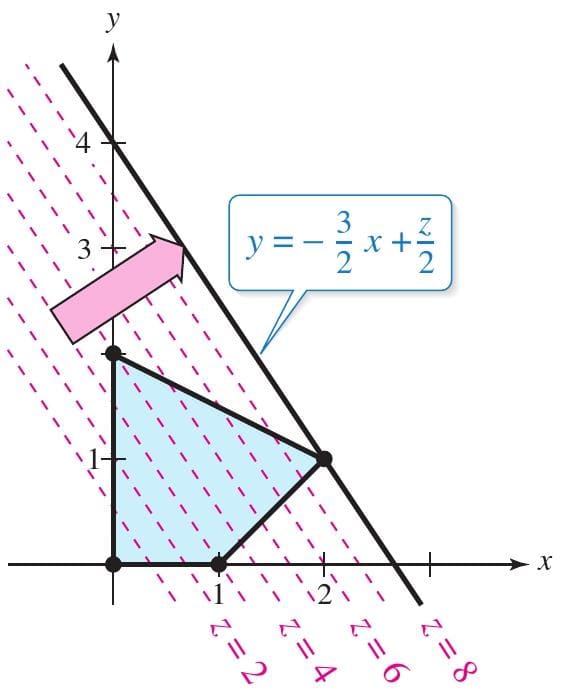 The graphical method for solving a linear programming problem works whether the objective function is to be maximized or minimized. The steps used are precisely the same in either case. After you have evaluated the objective function at the vertices of the set of feasible solutions, simply choose the largest value as the maximum and the smallest value as the minimum. For instance, the same test used in Example 2 to ﬁnd the maximum value of z can be used to conclude that the minimum value of z is 0, and that this occurs at the vertex (0, 0).

Look at the statement signed by emoticon 💡 above at the beginning paragraph! That statement is realized by the following link below
💎 Linear Programming: How Can We Maximize and Minimize an Objective Function to the Constraints?👈