INDEPENDENT EVENTS
Events are independent if the occurrence of either of them does not affect the probability that the others occur. 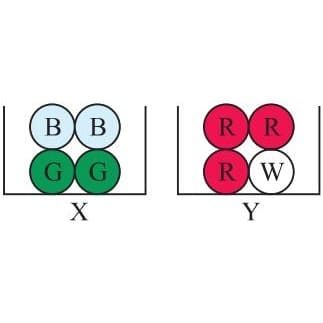 Q1. A coin and a die are tossed simultaneously. Determine the probability of getting a head and a 3 without using a grid.
Solution:

Q2. There are two identic bags, first one with 4 red and 6 white balls and the second with 1 red and 5 white balls. If one ball is picked from either of the two bags, then what is the probability that the ball picked is red?
a. 0.28 b. 0.31 c. 0.4 d. 0.2
correct: a, solution:
Do two these steps in a row, choose one bag then pick a ball inside. Probability of selecting any bag is 0.5. The required probability

Q3. Two identical bags are filled with balls. Bag A contains 3 pink and 2 yellow balls. Bag B contains 5 pink and 4 yellow balls. It is equally likely that Bag A or Bag B is chosen. Each ball has an equal chance of being chosen from the bag. A bag is chosen at random and a ball is then chosen at random from the bag.
a) Represent the information by means of a tree diagram. Clearly indicate the probability associated with each branch of the tree diagram and write down all the outcomes.
b) What is the probability that a yellow ball will be chosen from Bag A?
c) What is the probability that a pink ball will be chosen?
solution:
a) 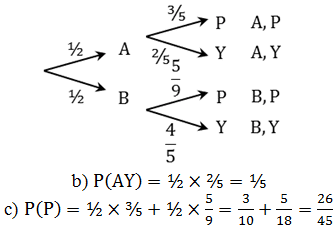 Q7. Determine whether the two events are independent or dependent.
1. Tossing a coin and selecting a card from a deck
2. Driving on ice and having an accident
3. Drawing a ball from an urn, not replacing it, and then drawing a secondball
4. Having a high I.Q. and having a large hat size
5. Tossing one coin and then tossing a second coin
solution:
1. Independent.Tossing a coin has no effect on drawing a card.
2. Dependent. In most cases, driving on ice will increase the probabilityof having an accident.
3. Dependent. Since the first ball is not replaced before the second ballis selected, it will change the probability of a specific second ballbeing selected.
4. Independent. To the best of the author’s knowledge, no studies havebeen done showing any relationship between hat size and I.Q.
5. Independent.The outcome of the first does not influence the outcomeof the second coin.

P(A)∙P(B̄)+P(Ā)∙P(B)
½×⅔+½×⅓=½(1)=½
RELATED POSTs
The Number of Elements Of An Event, Enumeration
Using tree diagrams to enumerate parallelable occurrence of an event
Fundamental Principle of Counting, an introduction to probability
How many ways can persons sit together? permutation condition
Factorial QnA
Permutation Formula, QnA
Letters Arrangements, QnA about Permutation
The Number of Possible Composition, Number of Possible Formation (permutation QnA)
Embed the link of this post
G. News 1G. News 2TwitterFacebookWhatsAppBufferLinkedInPin It