Probability of Geometrical Measurements such as time, area, length

Example 1.
In a musical chairs game, a person has been advised to stop playing the music at any time within 40 seconds after its start. What is the probability that the music will stop within the first 15 seconds?
solution:
Total result =0 sec to 40 sec
Total possible outcomes =40→n(S)=40
Favorable results =0 sec to 15 sec
Favorable outcomes =15→n(E)=15
Probability that the music will stop in first 15 sec

Example 2.
In a musical chair game, the person playing the music has been advised to stop playing the music at any time within 2 minutes after she starts playing. What is the probability that the music will stop within the first half-minute after starting?
solution: Here the possible outcomes are all the numbers between 0 and 2. This is the portion of the number line from 0 to 2 (see the given picture).

Can we now extend the idea of Example 2 for finding the probability as the ratio of the favorable area to the total area?

If n(S) and n(E) are both infinite, the probability can
be estimated by geometrical method as below:

Ex3. A hockey match is played from 4 PM to 6 PM. A boy arrives to see the match (not before the match starts). What is the probability that he will miss the only goal of the match which takes place at the 15th minute of the match?
solution:
To arrive at the match the by has to reach between 4 PM to 6 PM. So, the total possible length of time =2 hours =120 minutes.
He will miss the goal if he arrives between 4.15 PM and 6 PM. So, the favourable length of time =1 hour 45 minutes =105 minutes.
Hence the required probability
=105/120=⅞

Ex4. A missing helicopter is reported to have crashed somewhere in therectangular region shown in this figure. 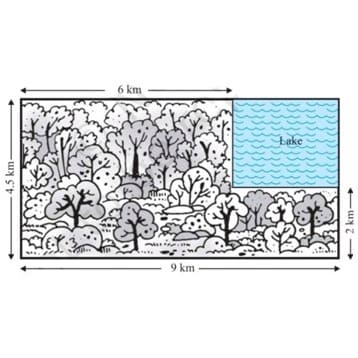 What is the probability that it crashed inside the lake shown in the figure?
solution: The helicopter is equally likely to crash anywhere in the region.
Area of the entire region where the helicopter can crash

Ex5. Suppose you drop a die at random on the rectangular region shown in the given figure. What is the probability that it will land inside the circle with diameter 1 m? 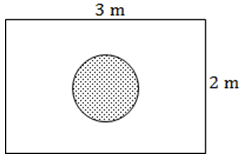 Ex6. A circle with diameter 20 cm is drawn somewhere on a rectangular piece of paper with length 40 cm and width 30 cm. This paper is kept horizontal on table top and a die, very small in size, is dropped on the rectangular paper without seeing towards it. If the die falls and lands on paper only, find the probability that it will fall and land:
(i) inside the circle (ii) outside the circle
solution:
Diameter of the circle =20 cm
Radius =10 cm
Area of circle πr2=22/7×10×10= 2200/7 cm2
Length of paper =40 cm
Width of paper =30 cm
Area of paper =1200 cm2
Total possible outcomes =area of rectangular paper
(i) Since paper is kept on table top and die falls and lands on paper.
Number of favorable outcomes =area of circle. If these
P(C)=P(inside the circle), a(C)=a(area of circle), a(R)=a(area of rectangular paper) then

Ex8. There is a rectangle of 4 cm by 5 cm. One point is selected at random. What is the probability that minimum distance of this point from any of the four sides of the rectangle is less than 1 cm?
a. 0.3 b. 0.5 c. 0.7 d. 0.8
correct: c, solution:
The point can be 1 cm away from all the four sides. Hence the difference of the area of onginal box and area of the box formed by reducing the sides by 2 cm i.e (3×2) is the area where the point can be placed. The probablity =

Now the length of the greater part will be always more than 3 times the smaller part, if the cut is in the 1st or 4th part. Hence Probability =½.
RELATED POSTs
The Number of Elements Of An Event, Enumeration
Using tree diagrams to enumerate parallelable occurrence of an event
Fundamental Principle of Counting, an introduction to probability
How many ways can persons sit together? permutation condition
Factorial QnA
Permutation Formula, QnA
Letters Arrangements, QnA about Permutation
The Number of Possible Composition, Number of Possible Formation (permutation QnA)
Embed the link of this post
TwitterFacebookWhatsAppBufferLinkedInPin It