Probability of Independent Events “Without Replacement”

P(D∩E)=P(D)∙P(E)=2/6∙4/6=8/36
Try to determine the problem above by using the following sample space which are tossing of two balance dice. Then compare the results with the results obtained above. 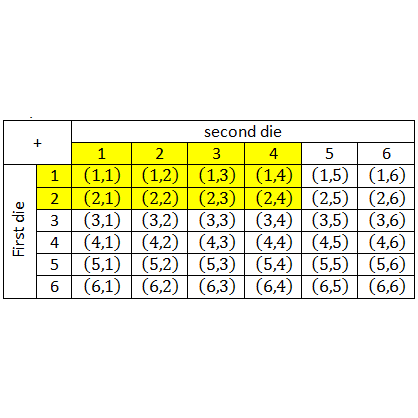 2. Two balance dice are tossed once together. Probability of getting prime of first die and getting odd of second die equals …
A. ⅙ B. ⅕ C. ¼ D. ⅓ E. ½
correct: C, the explanation:
prime number less than or equal to the number of sides of a die contains {2,3,5}.
Then the odd numbers contains {1,3,5}.

3. A coin is tossed twice in a row. Probability of the emerging image side at the first tossing and number side at the second tossing equals …
A. ½ B. ⅓ C. ¼ D. ⅕ E. ⅙
correct: C, the explanation:
A coin has two sides.

4. From a set of playing cards (bridge card) two cards are taken one by one “without replacement. Probability of both cards taken are aces =⋯
A. 2/52 B. 3/52 C. 4/52 D. 12/2652 E. 16/2704
correct: D, the explanation:
Playing cards contains 52 cards and 4 aces among the cards.
Phrase “without replacement” at this restricted context means both the wanted elements quantity and the sample space are reduced by an element on the second same treatment.