Probability of multiple events happening at a time (a turn)

P(H)∙P(diamond)= ½∙¼=⅛
Independent Events
Suppose box X contains 2 blue and 2 green balls, and box Y contains 1 white and 3 red balls. A ball is randomly selected from 1 each of the boxes. Determine the probability of getting “a blue ball from X and a red ball from Y”.

By illustrating the sample space on the two-dimensional grid shown, We can see that 6 of the 16 possibilities are blue from X and red from Y. Each of the outcomes is equally likely, so

In this section we look for a quicker method for finding the box); probability in such a situation. 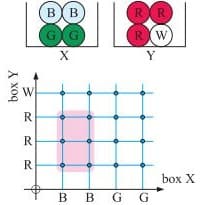 Let’s read more explanation about Independent Events in the post Probability: Independent Events.
RELATED POSTs
The Number of Elements Of An Event, Enumeration
Using tree diagrams to enumerate parallelable occurrence of an event
Fundamental Principle of Counting, an introduction to probability
How many ways can persons sit together? permutation condition
Factorial QnA
Permutation Formula, QnA
Letters Arrangements, QnA about Permutation
The Number of Possible Composition, Number of Possible Formation (permutation QnA)
Embed the link of this post
G. News 1G. News 2TwitterFacebookWhatsAppBufferLinkedInPin It