Probability is the ideal of relative frequency – Multiple Choice Questions

In Class IX, you have studied about experimental (or empirical) probabilities of events which were based on the results of actual experiments. We discussed an experiment
of tossing a coin 1000 times in which the frequencies of the outcomes were as follows:

In Class IX, you tossed a coin many times and noted the number of times it turned up heads (or tails) (refer to Activities 1 and 2 of Chapter 15). You also noted that as the
number of tosses of the coin increased, the experimental probability of getting a head (or tail) came closer and closer to the number ½. Not only you, but many other persons from different parts of the world have done this kind of experiment and recorded the number of heads that turned up.

Example 1:
Suppose a dice is thrown 30 times. And the emerging number is a recorded and the results are presented in the following table.

Ex3. Mr. Kadi, a textile seller recorded the number of textiles sold per day for 100 days. From these records are obtained the following information:

Ex4. In tossing of a dice for 100 times, recorded results are as follows.

Use the following passage to answer examples the number 6-8
City PQR has 1,500,000 citizens.
If all citizens are grouped according to age and sex, then the frequency table is as follows.

Ex9. A die is tossed 100 times. The result is tabulated below. Study the table and answer the questions given below the table:
Event Tally Marks Frequency 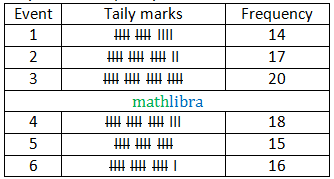 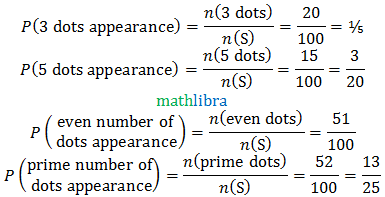