Sampling is commonly used in the quality control of industrial processes.
Sometimes the inspection process makes it impossible to return the object to the large group. For example:
● To see if a chocolate is hard or soft-centred, we need to bite it or squeeze it.
● To see if an egg contains one or two yolks, we need to break it open.
● To see if an object is correctly made, we may need to pull it apart.
Consider a box containing 3 red, 2 blue, and 1 yellow marble. If we sample two marbles, we can do this either:
● with replacement of the first before the second is drawn, or
● without replacement of the first before the second is drawn.
Examine how the tree diagrams differ: 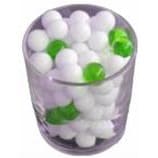 There is one important concept in problems with marbles/cards/balls. When the first marble is removed from a jar and not replaced, the probability for the second marble differs (9/99 vs. 10/100). Whereas in case of a coin or dice the probabilities are always the same (⅙ and ½). Usually, a problem explicitly states: it is a problem with replacement or without replacement.

(ii) Bulb drawn in is not detective & is not replaced remaining. Bulbs =15 good+4 bad bulbs =19
Total number of possible outcomes n(S)=19
E→ be event of getting a non-defective
Number of favorable outcomes n(E)=15 (15 good bulbs)

Q3. A bag contains 5 red and 3 blue marbles. Two marbles are drawn simultaneously from the bag. Determine the probability that at least one is red.
solution:
P(at least one red)=P(RR or RB or BR)

Drawing simultaneously is the same as sampling without replacement

(b) After I take one blue ball out, there are only II balls left altogether. Only6 of these are blue.

Q7. A packet of sweets has 3 pink, 2 green and 5 blue sweets. Two sweets are removed from the packet. one at a time, without replacement.
a) Draw a tree diagram to determine ALL possible outcomes. Indicate on your diagram the probability associated with each branch of the tree diagram.

Determine the probability that …
c) both sweets are blue.
d) a green and a pink sweet are selected.
solution:
a) 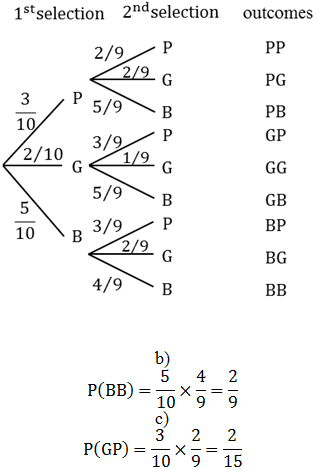 It has the same meaning as getting two items one by one without replacement.

Q9. Approximately 9% of men have a type of color blindness that prevents them from distinguishing between red and green. If two men are selected at random from a large group of men, find the probability that both will have this type of color blindness.
solution:
Since the group of men is very large, selecting one man does not radically change the probability that another man will be selected. Let C = red-green
color blindness; then P(C and C)=P(C)∙P(C)=(0.09)(0.09)=0.0081.
Actually:

It has the same meaning as getting two items one by one without replacement.