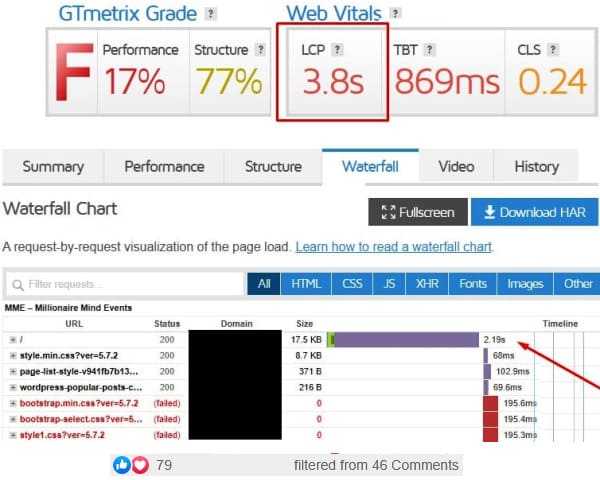 🔗🏹
65 👍🏽13 💟79 filtered from 46 💬🗨
Kroon » Mike
Thank U very much for this info! I really like the "server" sell out site 😉 I do not like GTmatrix either.. One thing is that it only check from a server on the other side of the atlantic sea 🙂 I work with companys with sites in europe and they are so focus to have the 100% green sign on their sites.. I ask them do U think your site is slow? No… So why bother with the GTm scoooooooore!?!
Galvin
Does minimising or compressing CSS, javascript and HTML on the site affect anything on the front end?
Mike ✍️🎩
It does. The impact of of compressing CSS and javascript on LCP times is going to be dependent on how much CSS and javascript is loading before or as part of the LCP element.
Galvin
I understand, which is a good thing. But does it affect anything bad on the front end of the site?
Mike ✍️🎩 » Galvin
I can't think of anything offhand. Try it and test it. It's nothing that cannot be reversed.
Kurt » Galvin
Minification can potentially break a script, but that is what testing is for. It's possible that gzip compression (or any kind of file manipulation) could corrupt a file. I've been a tech for many years and minification and compression are industry standard practices. Do it.

Felix
Thanks for the information. How much you usually charge to improve this score for your clients? I know the price will vary a lot, but just an estimate. Thanks

Mike ✍️🎩
I don't charge for it and I think anyone who is actively marketing a service to improve Core Web Vitals scores is kind of a douche.
💟1
Felix » Mike
I mean improve website speed in general
Mike ✍️🎩 » Felix
I don't charge for that either. If I'm in charge of a website for a client, it's just part of the job.

Prosky
It's funny…Siteground and WPEngine are my 2 go-to's when it comes to fast hosting. I guess maybe times they are a changing…

Mike ✍️🎩
WPEngine is solid. That one turned out to be an issue with the site. It had been hacked.
Prosky » Mike
Good…with as much as they charge, comparatively speaking, they have no excuse for overloaded shared hosting. For that matter neither does Siteground, and their free CDN is, well…a free Content Delivery Network (CDN)..
Mike ✍️🎩 » Prosky
Siteground's pricing is just terrible. It basically triples after year 1. NOBODY should be paying $200+ a year for shared hosting.

Luke
I was told recaptcha is slowing my site down, would you recommend removing it or leaving it up to block spam?

Mike ✍️🎩
I do not put much emphasis on speed. If you get a lot of spam without it and feel your site is fast enough as is, I would leave it.

Jay
I may be a little confused here on topics but can someone explain to me why my server response time would be slow according to Google Search Console (GSC) but Time to first byte (TTFB) is super fast according to my host, Kinsta?

Mike ✍️🎩
GSC is real world data. People connecting from different locations, different devices, different internet speeds.
It will be different than "lab" data which is what sites like GTMetrix or Lighthouse are using.

Jason » Mike
I use WPEngine on a shared hosting plan. (My own local pest control business)
I am talking with them about upgrading my hosting – what would you recommend? Virtual Private Server (VPS)? Dedicated server?

Mike ✍️🎩
Probably a VPS would be fine. Dedicated is really for a high volume or really resource intensive site (like something with a lot of videos). You might even be okay just staying with their shared plan depending how it is performing.

Jason
How can I remove Google fonts?

Mike ✍️🎩
Just don't use them and there will be no reason for them to load.
Jason » Mike
When I run audits on it (page speed insights and others) it tells me they are preloading, and that I should remove unused fonts…not sure how to remove them.
Mike ✍️🎩 » Jason
They generally only load if you are using them in your design somewhere, unless you are using some sort of page builder or plugin that is loading them for some reason.

These may satisfy you:
» What’s your position on user signals as a Rranking Factor this year?
» 7 SEO Steps for Website Rehabilitation after Google Updates