2. The sum of all the terms of the infinite sequence is called an infinite series and is denoted by

A convenient notation for the sum of the terms of a finite sequence is called summation notation or sigma notation. It involves the use of the uppercase Greek letter sigma, written as Σ.

Given a sequence a1, a2, a3, a4, … .
We can write the sum of the first n terms using summation notation, or sigma notation. This notation derives its name from the Greek letter Σ (capital sigma, corresponding to our S for “sum”). Sigma notation is used as follows:

The left side of this expression is read, “The sum of ak from k=1 to k=n.”
The letter k is called the index of summation, or the summation variable, and the idea is to replace k in the expression after the sigma by the integers 1, 2, 3, … , n. and add the resulting expressions, arriving at the right side of the equation. 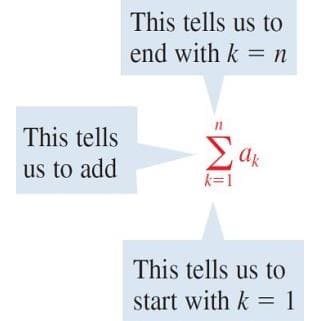 We want to use sigma notation to simplify our calculations. To do that, we will need to know some basic sums. First, lets talk about the sum of a constant. (Notice here, that our upper limit of summation is n. n is not the index variable, here, but the highest value that the index variable will take.)

Another Type of Sequence
For a sequence xi(i=1, 2, …) where a and b are constants:

Which can be further generalised for sequences beginning at m:

Properties of Summation Notation
Suppose {an} and {bn} are sequences so that the following sums are defined.