Remark: When the series is used, it refers to the indicated sum not to the sum itself. For example, 1+3+5+7 is a finite series with four terms.

When we use the phrase “sum of a series”, we will mean the number that results from adding the terms, the sum of the series is 16.

SIGMA NOTATION
Writing out a series can be time-consuming and lengthy. For convenience, there is a more concise notatiogi called sigma notation. The series 3+6+9+12+⋯+30 can be expressed as ∑10n=1 3n. This expression is read the sum of 3n as n goes from 1 to 10.

The variable, in this case n, is called the index of summation.

To generate the terms of a series given in sigma notation, successively replace the index of summation with consecutive integers between the first and last values of the index, inclusive. For the series above, the values of n are 1, 2, 3, and so on, through 10.

Series
A finite series is the sum of the terms of a finite sequence. Thus, if

a1+a2+⋯+an.
The number ak is referred to as the kth term of the series.
We often use the sigma notation for series. For example, if we have the series

∑50k=1 2k
Note that the variable k here is a dummy variable. This means that we could also write the series as

There is no need to use k as our index variable. We could have just as easily used m or j instead.

Study Tip: Sigma Notation
There are many ways to represent a given series. 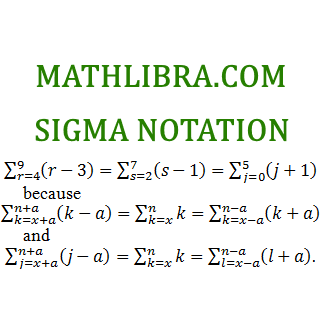 Sn–S(n-1)=an.
For example, if the sum of the first n terms of a series is given by Sn=n2, then the nth term is

1+3+5+⋯+(2n-1)=n2.
In general, it can be difficult to find a simple formula for the sum of a series to n terms.
For the rest of this section, we restrict our attention to arithmetic and geometric series.

Sigma Notation
In this section we introduce a notation that will make our lives a little easier.
A sum may be written out using the summation symbol Σ. This symbol is sigma, which is the capital letter “S” in the Greek alphabet. It indicates that you must sum the expression to the right of it:

The index i is increased from m to n in steps of 1.
If we are summing from n=1 (which implies summing from the first term in a sequence), then we can use either Sn– or Σ -notation since they mean the same thing:

we have to add together all the terms in the sequence ai=i from i=1 up until i=5:

Ex8. Write out what is meant by

Sigma notation
Here is another useful way of representing a series.
The sum of a series can be written in sigma notation. The symbol sigma is a Greek letter that stands for ‘the sum of’.

Properties of the sigma notation
There are a number of useful results that we can obtain when we use sigma notation.
1) For example, suppose we had a sum of constant terms

What does this mean? If we write this out in full, we get

In general, if we sum a constant 11 times then we can write

2) Suppose we have the sum of a constant times i. VVhat does this give us? For example,

However, this can also be interpreted as follows

In general, we can say

3) Suppose that we need to consider the summation of two different functions, such as 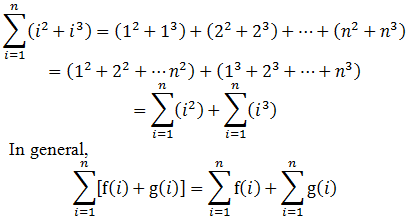 Some Basic Rules for Sigma Notation
1. Given two sequences, ai and bi,

2. For any constant c, which is any variable not dependent on the index i,

Rules for use with sigma notation

There are a number of useful results that we can obtain when we use sigma notation. For example, suppose we had a sum of constant terms

In general, if we sum a constant n times then we can write

Suppose we have the sum of a constant times k. What does this give us? For example,

In general, we can say that

Suppose we have the sum of k plus a Constant. What does this give us? For example, 4

In general, We can say that

Notice that we have written the answer with the constant no on the left, rather than as

to make it clear that the sigma refers just to the k and not to the constant nc. Another way of making this clear would be to write

In fact we can generalise this result even further. If we have any function g(k) of k, then we can write

by using the same type of argument, and we can also write

where a is another constant. We can also consider the sum of two different functions, such as

In general, we can write

and in fact we could even extend this to the sum of several functions of k.

Key Point: If a and c are constants, and if f(k) and g(k) are functions of k, then 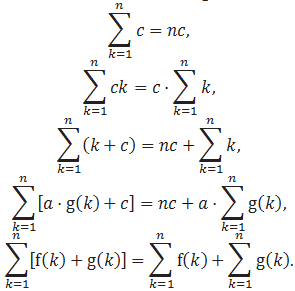 We shall finish by taking a particular example and using sigma notation. Suppose that We want to find the mean of a set of examination marks. Now

But more generally, if we have a set of marks xm, where i runs from 1 to n, we can write the mean using sigma notation. We

Ex10. By writing out the terms explicitly, show that