Introduction
This chapter gives you an opportunity to build on what you have learned in previous Grades about data handling and probility. The work done will be mostly of a practical nature. Through problem solving and activities, you will end up mastering further methods of collecting, organising, displaying and analysing data. You will also learn how to interpret data, and not always to accept the data at face value, because data are sometimes unscrupulously misused and abused in order to try to prove or support a viewpoint. Measures of central tendency (mean, median and mode) and dispersion (range, percentiles, quartiles, interquartile, semi-inter-quartile range, variance and standard deviation) will be investigated. Of course, the activities involving probability will be familiar to most of you — for example, you have played dice games or card games even before you came to school. Your basic understanding of probability and chance gained so far will be deepened to enable you to come to a better understanding of how chance and uncertainty can be measured and understood. 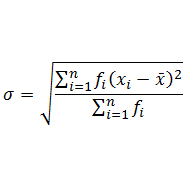 Here, x is class mark of the interval.

where x is each individual value, x̄ is the mean and n is the number of values. The symbol sigma Σ means ‘the sum of’. This formula will be on the data sheet Make sure you can use the formula properly.

(i). Find the mean of all the numbers in the data set.
(ii). Find each value of x-x̄. In other words, work out by how much each of these values differs (or deviates) from the mean.
(iii). Square each deviation. Find each value of (x-x̄)2
(iv). Add all the answers together. In other words, find Σ(x-x̄)2.
(v). Divide this sum by the number of values, n.
(vi). You have now found

. This value is called the variance.
(vii). Find the square root of the variance to find the standard deviation.

By working through these steps, you have found the standard deviation using the formula.

Example 1: Finding the variance and standard deviation
These are the results of a mathematics test for a Grade 11 class of 20 students. 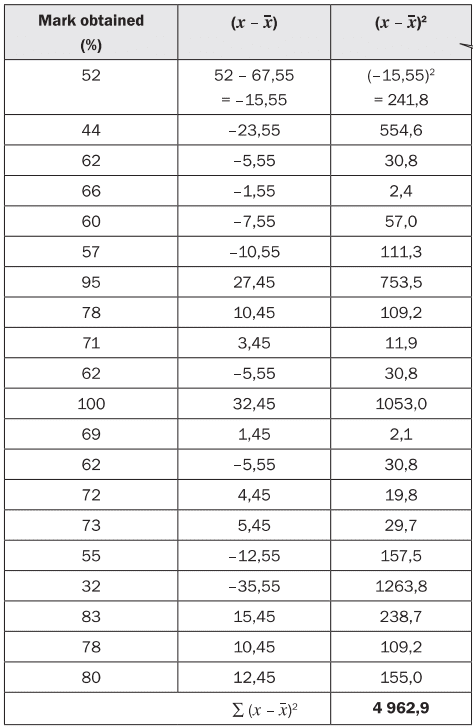 c) One standard deviation from the mean lies between

Note: To get the deviations, subtract each number from the mean.

Note: The sum of the deviations of scores about their mean is zero. This always happens; that is Σ(x-x̄)=0, for any set of data. Why is this? Find out.
Calculate the variance (add the squared results together and divide this total by the number of items). 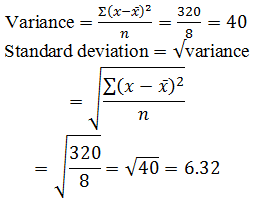 Ex3. Bridget surveyed the price of petrol at petrol stations in Cape Town and Durban. The data, in rands per litre, are given below. 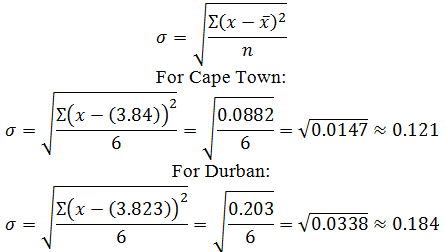 c) The standard deviation of Cape Town’s prices is lower than that of Durban’s. That means that Cape Town has more consistent (less variable) prices than Durban.

Ex4. The data below shows the energy levels, in kilocalories per 100 g, of 10 different snack foods.

Ex5. The times for 8 athletes who ran a 100 m sprint on the same track are shown below. All times are in seconds.

From the formula of the variance we have

Substitute a=33-b into this equation to get

Therefore b=13 or b=20.
Since a=33-b we have a=20 or a=13. So, the two unknown values in the data set are 13 and 20.
We do not know which of these is a and which is b since the mean and variance tell us nothing about the order of the data.
RELATED POSTs
Arithmetic Mean for Ungrouped Data – Statistics
Arithmetic Mean for Frequency Distribution – Statistics
The Mean of Continuous or Discrete Distribution (Grouped Data)
Examples of The Median for Ungrouped Data
Cumulative Frequency Tables and Graphs (Ogives) (10 Examples)
Quartiles and the Interquartile Range for Ungrouped Data
Explaining Quartiles with Percentiles
The Mode of Ungrouped Data
Embed the link of this post
G. News 1G. News 2TwitterFacebookWhatsAppBufferLinkedInPin It