the number of Distinct Subsets of a Set — Power Set 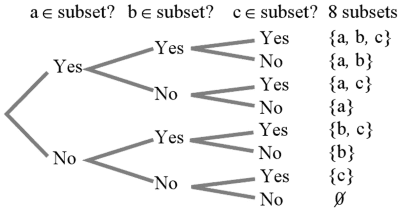 In Example 1, we determined the number of subsets of a given set by making a list of all such subsets and then counting them. The tree diagram method also pro- duced a list of all possible subsets. In many applications, we don’t need to display all the subsets but simply determine how many there are. Furthermore, the trial and error method and the tree diagram method would both involve far too much work if the original set had a very large number of elements. For these reasons, it is desir- able to have a formula for the number of subsets. To obtain such a formula, we use inductive reasoning. That is, we observe particular cases to try to discover a general pattern.

Begin with the set containing the least number of elements possible—the empty set. This set, Ø, has only one subset, Ø itself. Next, a set with one element has only two subsets, itself and Ø. These facts, together with those obtained above for sets with two and three elements, are summarized here.

This chart shows that the number of elements in each case is the same as the exponent on the 2. Inductive reasoning gives the following generalization.

Number of Subsets
The number of subsets of a set with n elements is 2n.

Since the value 2n includes the set itself, we must subtract 1 from this value to obtain the number of proper subsets of a set containing n elements.

Number of Proper Subsets
The number of proper subsets of a set with n elements is 2n-1.

As shown in the chapter on problem solving, although inductive reasoning is a good way of discovering principles or arriving at a conjecture, it does not provide a proof that the conjecture is true in general. A proof must be provided by other means. The two formulas above are true, by observation, for n= 0, 1, 2, or 3. 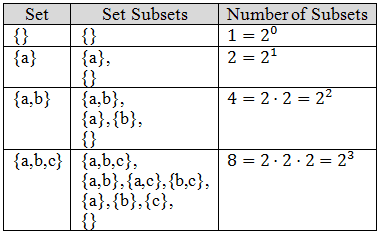 By continuing this table with larger and larger sets. we can develop a general expression for finding the number of distinct subsets that can be made from any given set.

Number of Distinct Subsets
The number of distinct subsets of a finite set A is 2n, where n is the number of elements in set A.

Number of Distinct Proper Subsets
The number of distinct proper subsets of a finite sent is 2n-1, where n is the number of elements in set A.

⛲ Question 1. Brigette Martineau is ordering a new car. She can order some. all, or none of the following options: power windows, MP3 player port, leather interior. alarm system, sun roof, and navigation system. How many different variations of the set of options are possible?
✍ Solution:
Brigette can order the car with no options, any one option, any two options, any three options, and so on, up to six options. One technique used in problem solving is to consider similar problems that you have solved previously. If you think about this problem, you will realize that it is the same as asking how many distinct subsets can be made from a set with six elements. The number of different variations of the set of options is the same as the number of possible subsets of a set that has six elements. There are 26, or 64. possible subsets of a set with six elements. Thus, there are 64 possible variations of the set of options for the car.