where symbols have the same meaning as above only taking third quartile in place of first quartile.
Frequency Distribution
The organization of a set of data in a table showing the distribution of the data into classes or groups together with the number of observations in each class or group is called frequency distribution. The number of observations falling in a particular class is referred to as the class frequency or simply frequency and is denoted by f.

Class Boundaries
The class boundaries are the precise numbers which separate one class from another. A class boundary is located midway between the upper limit of a class and the lower limit of the next higher class.

Quartiles
Using the same method of calculation as in the Median,
we can get Q1 and Q3 equation as follows: 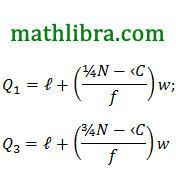 Example 1: Based on the grouped data belo w, find the Interquartile Range

Example 2:
Find the the quartiles Q1, Q2, and Q3 of the following data.

Solution:
step 1) Find each cumulative frequency and each real interval.

The interval where the second quartile lies has the cumulative frequency of 14.

Example 3: Calculation of Quartile Deviation (Q.D.) for a frequency distribution.
For the following distribution of marks scored by a class of 40 students, calculate the Range and Q.D.

Range is just the difference between the upper limit of the highest class and the lower limit of the lowest class. So Range is 90–0=90. For Q.D., first calculate cumulative frequencies as follows:

In individual and discrete series, Q1 is the size of ¼(N+1)th value, but in a continuous distribution, it is the size of ¼N th value. Similarly, for Q3 and median also, n is used in place of N+1.

Quartile Deviation can generally be calculated for open-ended distributions and is not unduly affected by extreme values.

Other measures of variation:
The variance and standard deviation are regarded as the best and the most powerful mea- sures of dispersion. One of the dra w backs with these measures of dispersion is that they are influenced by extreme observations. Thus, many statisticians think that if the median is used (instead of the mean) as a measure of central tendency because of the presence of the outliers, then some other measures of dispersion, namely the interquartile range or the quartile deviation, should be used to describe the variability.

Example 4:
Find the interquartile range and the quartile deviation for the given data in the table below: