Thoughts on “EAT is Not in SEO”| Expertise, Authoritativeness, Trustworthiness (EAT)

Discussion 2: Thoughts on “EAT is Not in SEO”| Expertise, Authoritativeness, Trustworthiness (EAT)
Rienzi
Thoughts?
[filtered from 29 💬🗨]
Twitter @schachin
E-A-T is NOT #SEO.
Expertise, Authoritativeness, & Trust. It’s conceptual. It’s a way to conceptualize the Quality Raters qualities of the sites Google hopes to surface with its algorithms. Quality Raters Guide? The goals of the algorithms, not the algorithms themselves. 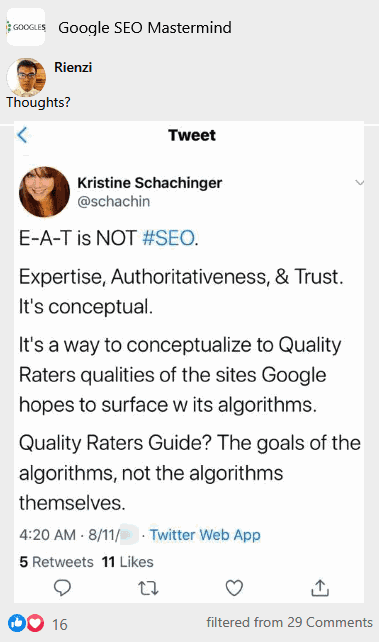 Mark
She’s completely right. It’s a concept, not a set of explicit instructions or actions 👍🏽3

Tica
I agree with her statement 100%. They are probably trying to reverse engineer EAT plentiful sites by looking at patterns. Sure, it might be partially implemented in some verticals, therefore the correlation between EAT improvements and ranking changes. 👍🏽1

Mark » Tica
this I agree with. Turn all the subjective human rater data into numbers, look for patterns and implement them into the algorithm. 👍🏽1

Mike
I totally agree with her, but I'm perfectly fine with the idea of other SEOs chasing their tails over this stuff. 👍🏽3

This may satisfy you: To Know Whether a Person is Really Good in SEO | Search Engine Optimization
Discussion 1: SOPs around optimizing content for Expertise, Authoritativeness, Trustworthiness (EAT)
Chris
Any SOP's around optimizing your content for E-A-T?Is it even worth it? Would you consider it a ranking factor?
I see mixed messages, its strange but all rankings revolve around Expertise, Authority and Trust, but usually I get these signals from backlinks.
How do you AUTHORITIZE your content?
I seen this in a Ranking Checklist post for 2020 and I just thought, Huh, EAT your content … sure.
15 👍🏽 3 🤭 18
[filtered from 42 💬🗨]

💬🗨
Robert
It is so not another silly catch phrase. A lot of people think that, but check out the episode on SEO Fight Club related to it. Amazing stuff presented by Kyle that intuitively makes sense and I'm sure they're testing it if they haven't already.
Here's an example, say you have a team page, and all of your team members are listed. Usually what you see, in about 99.9% of cases, it's just a picture of somebody, what their name as a caption. But what if you were to include their LinkedIn profile? And their Facebook profile? And their Twitter profile? Do you think that's going to help with trust? What about their cell phone number? What about their email address? Of course it is. That's just one of the things that Kyle talks about with respect to the Expertise, Authoritativeness, Trustworthiness (EAT) algorithm update
💟1
Chris » Robert
I'll check it out I love fight club!!

Roger
There is no such thing as an EAT Algorithm Update. That never happened. That is 100% misinformation.
The concept of E-A-T was created to standardize the ratings that 3rd party raters contributed.
There are no actual patents or research papers that talk about establishing those three as actual metrics.
There are things like LINKS that have traditionally been used to establish expertise and authority as well as understanding what users want to see.
Ultimately, Google Search Engine Result Pages (SERPs) are about showing users what they expect to see. All metrics and algos like links and content analysis and Natural Language Processing (NLP) all revolve around understanding what users want.
E-A-T was something SEO users extrapolated from the Quick Response Graphic (QRG) but that document does not tell you how the algorithm works or what the algorithm is looking for. It's to standardize ratings for third party raters.
REMEMBER: The algo is looking to understand queries and match them to web pages. That's what all that NLP research and BERT and RankBrain has all been about.
Everything SEO users say about E-A-T is a mistake based on using the QRG for information that is not there.
I have been saying this for the past couple years:
https://www.searchenginejournal.com/google-john-mueller-e-a-t/322455/
It wasn't until October of 2019 that Gary Illyes confirmed it:
https://www.seroundtable.com/google-eat-score-28356.html
Google's John Mueller is Asked About Links and E-A-T – Search Engine Journal
💟👍🏽4

Chris » Roger
Thanks I'll check out the articles, I keep seeing stuff on EAT pop up and I just needed to double check my sanity for a moment.
Roger » Chris
Yeah, I mean, Gary Illyes was asked about that point blank and everything he said makes sense and matches up with what I've been pointing out and what Mueller's been saying about the QRG. He said there is no such metric or specific EAT algo.
There are no ranking hints in the QRG. The QRG is just meant to put the raters on the same page, to use the SAME methods for evaluating example SERPs. That's all.
Expertise and authority, those are implicit in things like links. Mueller's said a bunch of times that they don't use on-page factors like your author bio because it's so easy to game that, to make it up. It's incredibly naive concept. That's something SEO users invented.
Mercola's site still hit the fan even though he's a doctor, has a bio and has a ton of links. Why? Because Google's algo determined what users want and it's not Mercola's "alt" medical solutions.
As I said above, if you want to figure out why Google is doing something, start with what something means to users because a large part of the recent changes are focused on understanding user queries and on-page content.
That on-page E-A-T stuff, there is NOTHING to support that.
💟2
Chris
I find it funny that SEJ would publish exact opposite SEO information. From my references above https://www.searchenginejournal.com/improve-google-eat-score/270711/
5 Things You Can Do Right Now to Improve Your Google E-A-T Rating
Roger » Chris
I do too! 🙂
But you know, everybody has their opinion and it's up to every digital marketer to read it and judge it and make up their own mind.
I am not going to ask the editor to remove something to make it conform to my opinion. And I'm not going to say that someone is specifically wrong, never.
Everyone has a voice and is free to share their opinion. I only discuss ideas, not people. 😉
💟👍🏽2
Chris
Your article https://www.searchenginejournal.com/google-john-mueller-e-a-t/322455/
Google's John Mueller is Asked About Links and E-A-T – Search Engine Journal
Chris
everyone likes getting links from SEJ ..
🤓 I heard it increases your EAT score?! Lol jk 🤭
🤭1
Roger
Well… this gave me something to write about, so thanks! 🙂
https://www.searchenginejournal.com/e-a-t-and-SEO/342449/
Surprising Facts About E-A-T – Search Engine Journal
💟1
Chris » Roger
Lol that was f a s t… I have a read through this today 😉

This may satisfy you: How do You Know if the SEO Assistant You are Paying for Is Good?

RELATED POSTs
Are Coding Skills Important for Being a Successful SEO Expert?
To Know Whether a Person is Really Good in SEO | Search Engine Optimization
Marketplace Websites Get Each First Page of the SERPs With Lots of Keywords They Drive Visitors Who Are Intending to Purchase
Conspiracy Theory in SEO: First Page Results May Change Your Mind or Knowledge
Three SEO Tips related to Secret Sauce
Comments on Someone said SEO is Dead
As an SEO Specialist Do You Ask Any Client for Access Details Every Time You Want to Make Some Corrections?
Case Study: How We Grew a SAAS Company From 0 to 200k Monthly Organic Traffic
Embed the link of this post
G. News 1G. News 2TwitterFacebookWhatsAppBufferLinkedInPin It