If the sequence u1, u2, u3, …, un is geometric, then the corresponding series Sn=u1+u2+u3+⋯+un is a geometric series.
The formula for Sn of a geometric series can be written in terms of the first term, a, and the common ratio, r.

Note: In practice it does not matter which form is used.
To derive this result:

Once we find the first term, a, and the common ratio, r, we can answer any question about a geometric sequence or series.

If we are adding all of the terms in a geometric sequence which goes on and on forever, we have an infinite geometric series.

Sum of a Finite Geometric Series

For a finite geometric series with r≠1.

In the case r=1 we have a sequence in which all terms are the same, and Sn=u1⋅n.
Example 1. Chain Letter Problem

Linda starts a chain letter and sends it to three friends. Each of the three friends sends the letter to 3 other friends and the sequence is repeated. Assuming that no one breaks the chain, how many letters will have been sent from the first through the sixth mailings?
Solution: Again, a diagram will help in the understanding of the problem.

The problem asked for the total letters mailed. So the formula for the sum of n terms of a geometric sequence is used.

There are 1092 letters mailed in all.

Example 2: Find the Sum of the First n Terms

In the book Roots, author Alex Haley traced his family history back many generations to the time one of his ancestors was brought to America from Africa. If you could trace your family back for 15 generations, starting with your parents, how many ancestors would there be?

Counting your two parents, four grandparents, eight great-grandparents, and so on gives you a geometric series with a1=2, r=2, and n=15.

Including Cora, 40 people know about the party. Therefore, the correct answer is (D).

Okay, it’s geometric, and the common ratio is ½. The general term formula gives un=128⋅½(n-1), and because I know that every number in the list is a power of 2, I’m going to make the formula into just a power of 2. It entertains me.

The laws of exponents (remember those?) indicate that I should multiply the exponents on the second term, and then add the powers on the twos.

To get back from u6 to u1, I’ll have to divide by 2 five times (count it yourself if you don’t believe me). So

And now I have enough for the general term:

Ex7. Find the sum of five terms of the geometric series whose first term is 2 and Whose fifth term is 162.
Solution: 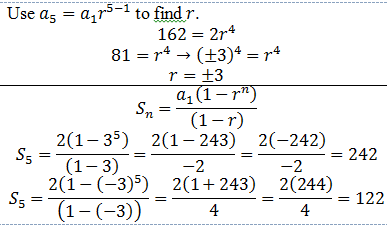 Ex8: The sum of a finite geometric series
Find the sum of the series

Solution:
The first term is ⅓, and the common ratio is ⅓. So the nth term can be written as

an=⅓⋅⅓(n-1).
We can use this formula to find the number of terms in the series:

Because 36=729, we have n=6. (Of course, you could use logarithms to solve for n.) Now use the formula for the sum of six terms of this geometric series:

Ex9. Find the sum of the geometric series

Ex11: Determining the Sum of Given Terms of a Geometric Series
Determine the sum of the first 15 terms of this geometric series:

Ex12: Determining the Sum of a Geometric Series
Calculate the sum of this geometric series: 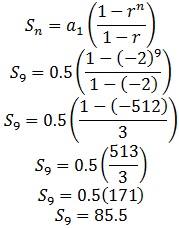 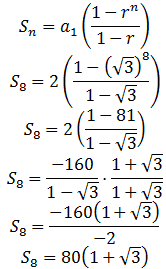 Substituting for r in equation (i).

Let’s read post Alternate Formula For Sum of Finite Geometric Series — Second Form.
RELATED POSTs
What is a Sequence?
Get Terms from Sequences
Writing the First Few Terms of each Sequence (Writing a Sequence)
Determine whether each sequence is arithmetic, geometric, or neither
The General Term of Fibonacci Sequence
Translating from Recursive Rules to Explicit Rules (General Terms)
How to Describe every Arithmetic Sequence?
Get the Common Difference of each Arithmetic Sequence
Embed the link of this post
G. News 1G. News 2TwitterFacebookWhatsAppBufferLinkedInPin It