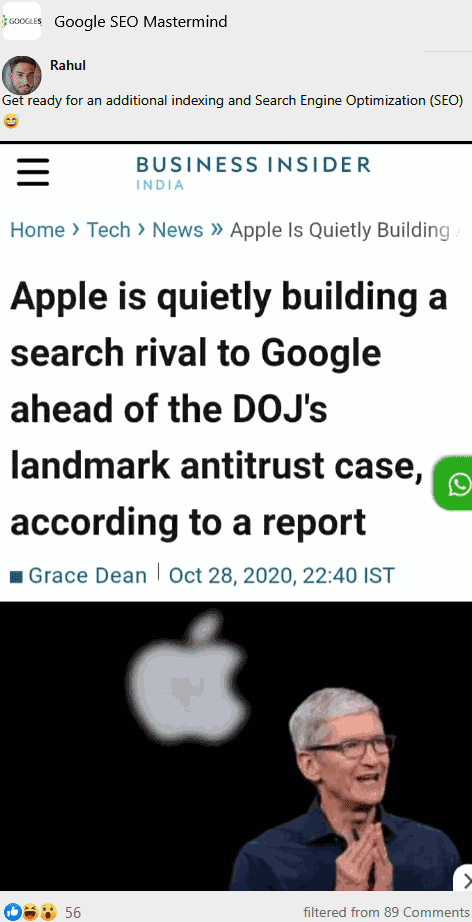 🔗🏹
💬🗨
Naik
Domination must begin
Smith
It will not be successful. It might chip away at say 10% of the market but overall Google will remain supreme. 👍🏽7
Tag » Smith
if Apple by some reason (legal?) decides to walk away from Google Search, then it will be 50% overnight. I attach the excerpt from antitrust claim ( first hearing is scheduled for today btw) 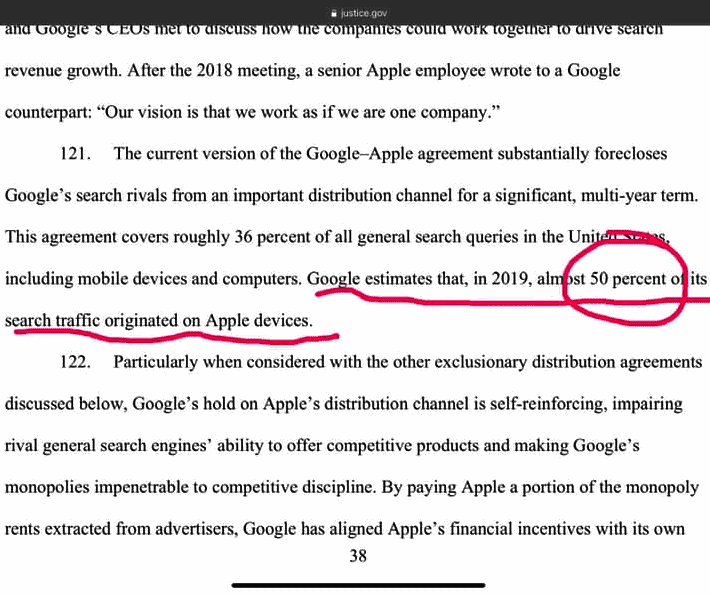 🔗🏹
👍🏽1
Smith
Except where does the other 50 come from? I do know the answer to that. The point is it's the USERS picking Google ok? Ultimately when it boils down to it that's what it is. The government can grab billions from them.. they will push forward. What do people say as a common phrase? "Google that shit."
They aren't gonna say "Apple that shit" is what I mean. I remember when there was Alta Vista as the search engine that was prominent and I mean this was way way back in the late 90s now Google reigns supreme. Why? Their algorithm which turns out is theirs to privately own. Microsoft just duplicates Google on almost everything yet with a broken algo.
Brandon » Smith
Yea and in the Uk they Hoover the floors with whatever vacuum brand they want.
Smith » Brandon
sure… But they using Google too… In November 2018, Google had the highest market share in the United Kingdom, at 89.1% for desktop, tablet and console devices.
I mean shit 89.1% in 2018 I wonder what it is now. Probably 93%.. yeah they using the Google too.
Why? Because it freaking works that's why we use it. These antitrust suits are government oversight we don't need. We are all adults and can decide which platforms to use or not use. That's the idea here. They are acting like we are forced. Don't like Google go try Bing for a week.
Jason
It comes from their base. And all they need search for is ads. FB built their revenue model on their own ad platform, Apple is going to do the same for an additional revenue stream. Odd part tho is (except mobile) most people use Chrome, not Safari.
Brandon » Smith
huh? What does vacuuming have to do with the UK using Google? I'm just pointing out that when a brand name becomes synonymous with a task it is no longer as valuable. Hence people Hoover with a Dyson.
Smith
Apple is going to fail mark my words. And Chrome again is superior.
Smith » Brandon
not in the search engine world.
Brandon » Smith
It'll never be a powerhouse, but I wouldn't dismiss it either. We're already seeing Apple provide traffic in local searches when they interject info before the user even gets to the google search. It'd probably be a lot more if we could get the client to pay attention to Yelp in all for their markets…
Smith » Brandon
Apple is using Microsoft to power those searches..
Anyways dev is beginning for the day. This anti trust suit means nothing. It's a money grab. They will force google to ask users if they wish to use Google and that'll be the end of it.. maybe they lose 10% its unlikely.
Brandon » Smith
True, sir. Search is powered by Bing, but those star ratings and links are coming from Yelp.

Eric
It baffles me you all think just because a company is big that means they will remain big forever.
Yeah and Facebook is dumb. Nobody can take out MySpace.
And Who remembers Google is dumb, these nobody’s can’t compete with yahoo.
How many of you are on Motorola phones? Taking photos with Kodak?
Does anyone in this group use AOL for internet?
Shall I continue or do you get my point? 👍🏽12
Smith » Eric
It’s the same thing Blockbuster said when Netflix rolled out and Wal-Mart said when Amazon started selling everyday items instead of just books.
We are too big to worry. 👍🏽1
Eric » Smith
exactly. The list goes on. 10 years ago Tesla wasn’t even on the car maker graphs. Today they are number one.
If anything in today’s world taking out a leader is easier than ever.
I mean, I don’t think it can happen but to just dismiss a move outright as impossible is foolish.
It is pretty clear Apple is due for a major pivot, they know as do we all that their future is not where they are now.
It will likely be a safer, more secure search like duck duck go but with the Apple brand and bank account behind it. That’s not something to just dismiss. 👍🏽1
Finan » Eric
I agree with you on a certain extent but people are still wearing Nike, Adidas, I get what your saying but if your a true leading institution nowadays it’s much harder to take down. 👍🏽1
Eric » Finan
I’m not talking about making google go out of business. People are still using MySpace too. I’m talking about being viable. Replacing a leader is bigger. I know I alluded to the possibility but I very much doubt Apple is trying to put Google out of business or is even considering it. 👍🏽1
Mark » Eric
yip. Its shocking how small minded people can be. They think because <insert big company> is the here and now, the world must have stopped turning. Duh. Let me tell people. Zuckerberg et-al know the world is catching up. Make no mistake about it. 👍🏽1
Mark
Every dog has its day. 💟1

Rick
Then maybe Apple should work a little harder on getting their manufacturing moved out of China. 👍🏽3

Eric » Rick
they are. And one has nothing to do with the other.
Rick
On the contrary – there are plenty of good ‘less watchful’ search engines already out there. With a company so big and in bed with China who will increasingly become more verboten in the near future do you really think people will trust using a tool from them that tracks their online life? 🤭1
Eric » Rick
"in bed with China" lol They make shit there. China also steals it's tech to make competing products. This oh no look, it's china! boogieman is hilarious. You don't think there is a company on the planet that doesn't do business with China in some way? You buy shit from China every day, are you "in bed with China?"
Also, Google also does a shit ton of business with China. Your point is moot.
Rick » Eric
In case you haven’t been keeping up, manufacturers have been leaving China in droves this year and many lawsuits to follow. 👍🏽1
Eric » Rick
manufacturing has nothing to do with search for one and Apple has been as well. I have been keeping up, have you? They have already relocated some manufacturing back to the USA.
Rick » Eric
The majority of Apple’s products are manufactured oversees. That means to a large degree the company does not support the US Economy. For the search aspect, people are tired of Google’s intrusion, why would they hand their personal data and tracking over to another global behemoth?
Eric » Rick
that’s inaccurate but not worth arguing about. I get it you hate China. Evil commies bad! Eisenhower says so, but Russia is great, etc etc. I’m too tired to argue lol.
Rick » Eric
There’s a reason the Government invoked new trade agreements with stipulations regarding patent theft, currency manipulation and other issues. There’s a reason the Chinese Embassy was told to pack up and get out months ago. And yes, China protected it’s own country from the Wuhan virus by blocking travel in and out of there for them but allowed international travel. China is a bad for us.

León
Apple should buy www.uaaau.org
Vazquez
$100 for indexing your site
$20/month first ranked
$200 for scrapping 🤭👍🏽4
Jared
How good does Apple maps go so far? 👍🏽2
This may satisfy you: A Funny Search Engine Name Uaaau org
Eric » Jared
it works quite well being it doesn’t collect and save every single thing you do 24 hours a day tracking your every move like google does. You may enjoy your every movement saved, stored, sold to vendors and given to the government but others disagree. 👍🏽1
Leeb » Eric
Apple is tracking that data too. Don't worry about that.
Eric » Leeb
not at all the same thing. It’s like comparing sex with my wife with a rapist as both having sex.
Leeb
I get your point. But, friend, don't trust Apple like you trust your wife.
If you're that deep into Apple you should look into Stockholm Syndrome. They're far from being the good guys. 🤭1
Eric » Leeb
if you think Apple is literally imprisoning and torturing people I can just laugh at the drama queen. Take care.

Tag
Re Apple using Bing for search. I think it’s BS now. Not for local for sure. 2. Yelp. Trip advisor – Apple started to collect reviews and photos in Australia (restaurants and shops)
3. Bing is using Facebook reviews
4. Facebook is using Apple Maps for business places
5. Majority in the USA use safari
6. Most smartphones in the USA – iPhones – more than android and other combined.
7. Voice search is on the rise and Siri is on par with Google, slightly ahead
8. Apple can walk away from google overnight (just a new iOS with isearch pre-installed – a few lines of code on
Y) and Google is scared . It’s google who pays Apple $8-12 billion not the other way around. Money talks.
Let’s see. But Apple is onto something – more and more smoke coming out lately… 👍🏽1