How many ways can persons sit together? permutation condition

Example 4:
In how many ways an organization can elect a leader, a secretary and a treasurer from their 10 members?
Answer:
Leader can chosen from the 10 members, means there are 10 ways to elect leader. After we get the leader, the (10-1)=9 members are left to be chosen as secretary, means there are 9 ways to elect secretary.
After we get leader and secretary, then (10-2)=8 members are left to be chosen as the treasurer, means there are 8 ways to chosen the treasurer. So, the ways to elect that three position =(10∙9∙8) ways =720 ways.
Notes: No matter what position which is chosen before the others, the number of ways to chosen is still teh same. Please investigated.
Exercise Competency Test 4
1. There are 4 chairs in a room. If there are 6 persons who will sit in that chairs, then the number of ways for them to sit at the chairs is equal to ….
A. 30 B. 120 C. 360 D. 720 E. 1440
Answer: C, explanation:
Suppose sitting in a series is important for permutation condition. Permutation will be explained so on. One person can not sit on two chairs. One person can sit on a chair only. 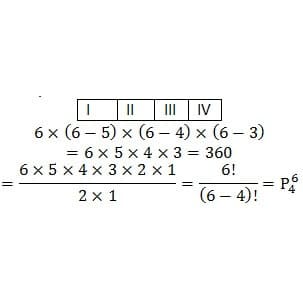 5. The numbers which is consist of 3 numeral (numeral used can be repeated) and its value is more than three hundred and will be formed by the numerals: 1, 2, 3, 4, 5. The number of number which are formed is equal to ….
A. 125 B. 75 C. 60 D. 36 E. 24
Answer: A, explanation:
5×5×5=125
6. An inn has 6 rooms, they get 4 guests who will stay overnight. The number of ways of the inn employee to place the guests at the rooms =….
A. 360 B. 240 C. 120 D. 24 E. 10
Answer: A, explanation:
=6×(6-1)×(6-2)×(6-2)
=6×5×4×3=360
RELATED POSTs
The Number of Elements Of An Event, Enumeration
Using tree diagrams to enumerate parallelable occurrence of an event
Fundamental Principle of Counting, an introduction to probability
Factorial QnA
Permutation Formula, QnA
Letters Arrangements, QnA about Permutation
The Number of Possible Composition, Number of Possible Formation (permutation QnA)
Circular Permutation: persons sit around a circular table, multicolor beads on a bracelet
Embed the link of this post
G. News 1G. News 2TwitterFacebookWhatsAppBufferLinkedInPin It