Summary of Basic Probability
In this chapter, you have studied the following points:
1. The difference between experimental probability and theoretical probability.
2. The theoretical (classical) probability of an event E, written as P(E), is defined as

0≤P(E)≤1
6. An event having only one outcome is called an elementary event. The sum of the probabilities of all the elementary events of an experiment is 1.
7. For any event E, P(E)+P(Ē)=1, where Ē stands for ‘not E’. E and Ē are called complementary events.

● The relative frequency of an event is defined as the number of times that the event occurs during experimental trials, divided by the total number of trials conducted. 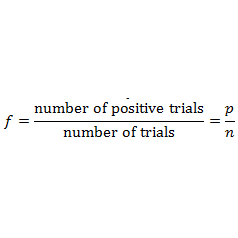 RELATED POSTs
The Number of Elements Of An Event, Enumeration
Using tree diagrams to enumerate parallelable occurrence of an event
Fundamental Principle of Counting, an introduction to probability
How many ways can persons sit together? permutation condition
Factorial QnA
Permutation Formula, QnA
Letters Arrangements, QnA about Permutation
The Number of Possible Composition, Number of Possible Formation (permutation QnA)
Embed the link of this post
TwitterFacebookWhatsAppBufferLinkedInPin It