How can we Calculate Probabilities with a 3-Set Venn Diagram?

⚠ Pay attention to every yellow-highlighted singular noun just on this page!

📌 Ex1. Charles asked 100 people which of the films Ghost, Titanic and Shrek they have watched. Here is some information about his results.

(a) Draw a Venn diagram to show this information.
(b) Charles picks, at random, one of these 100 people. Given that the person had watched Titanic, work out the probability that this person had also watched Ghost.
✍
(a)

Fill in the numbers on the Venn diagram in the order shown below …, i.e. starting with 20 watching all 3 films. 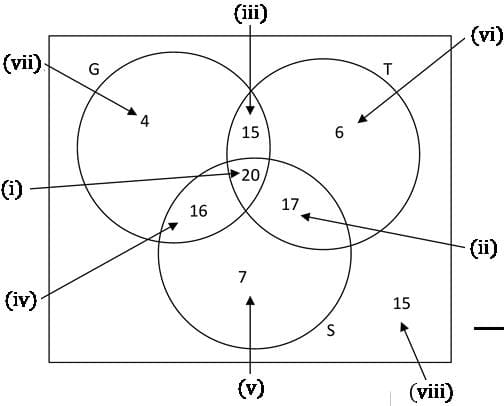 📌 Ex2. A researcher has found old census data about Measles (M), Chickenpox (C), and Whooping cough (W) among 12-year-old children. In a group of 100 children:

(a) Use this data to fill in the Venn diagram.
✍

At least two includes the sections of the Venn Diagram that are exactly 2 as well as the section that includes all 3.

(b) Find the probability that a child chosen at random from the group had Chickenpox.
✍ 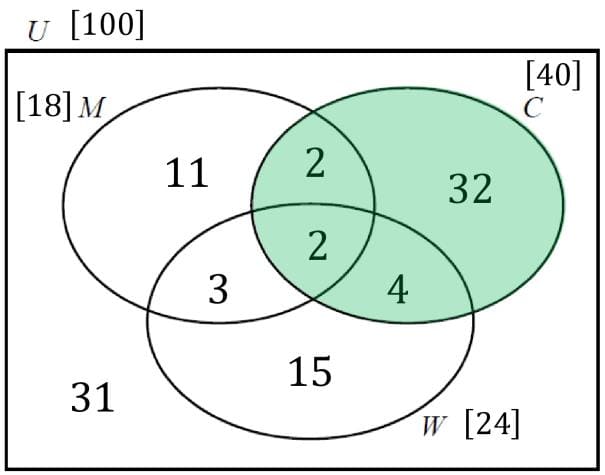 📌 Ex3. A survey of 80 participants at the 2019 Olympic Games was taken. Athletes’ participation was recorded as follows: 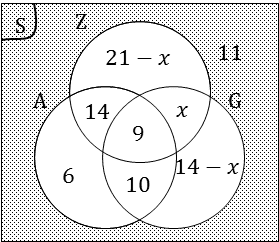 📌 Ex4. A school organised a camp for 103 Grade 12 learners. The learners were asked which food they prefer for the camp.
They had to choose from chicken (C), vegetables (V) and fish (F).
The following information was collected:

Let the number of learners who eat chicken, vegetables and fish be x.
(a) Draw a Venn diagram to represent the information.
(b) Calculate x.
(c) Calculate the probability that a learner, chosen at random:

(i) Eats only chicken and fish, and no vegetable.

(ii) Eats any TWO of the given food choices: chicken, vegetables and fish. 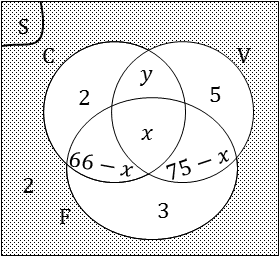 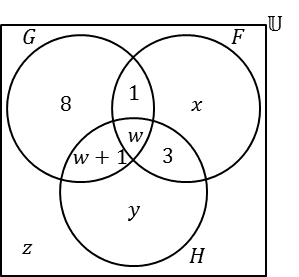 (a) From the information above, determine the values of w, x, y and z.
✍ Solution:

(i) takes only Geography.

(ii) takes French and History, but not Geography. 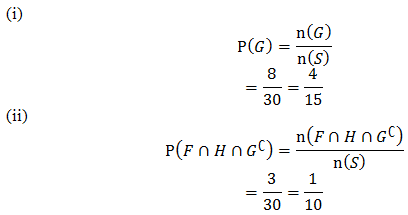 QUESTIONS and ANSWERS
Q1. All the members of a group of 35 students belong to at least one club. There are 3 clubs: chess, drama and art. 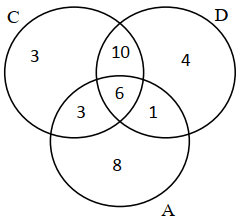 Q2. 140 people were asked in a tasting survey to say which, if any, of three cakes they liked. Here are the results.

(a) Draw a Venn diagram to show this information.
(b) A person is chosen at random from those who took part in the survey.Find the probability that this person

(i) did not like any of the three cakes. 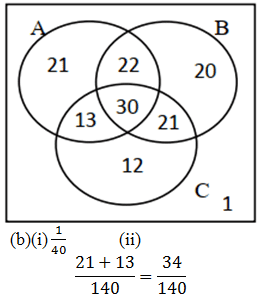